Okay, but when will they start hunting us for sport? 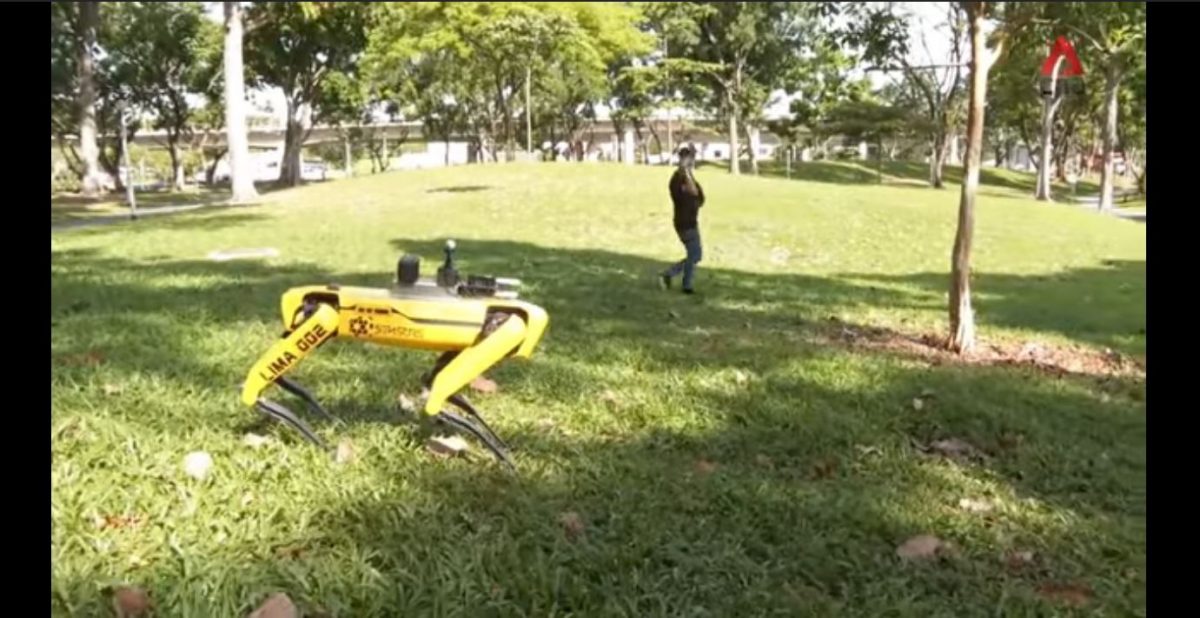 Readers, I must start this article with an apology. I’ve been so wrapped up in our ongoing COVID-19 apocalypse that I’ve neglected various other apocalypses on the horizon. Namely, the rising robot apocalypse which will surely kill us all.

Okay I’m obviously being facetious, but guess who isn’t joking around? Singapore. The sovereign island city-state is unleashing a pack of “robodogs” to monitor Bishan-Ang Mo Kio Park as part of a pilot trial to encourage social distancing. The four-legged remote controlled machines have been approaching walkers and cyclists and encouraging them to remain 6 feet apart or they will shoot them on sight with their laser beam eyes. Or so I assume.

The robodogs were designed by Boston Dynamics, the same group which gave us such nightmare fuel as Atlas the running jumping murderbot and whatever this dinosaur butler is.

They are part of a two week pilot trial by the National Parks Board (NParks), along with and the Smart Nation and Digital Government Group (SNDGG). They are equipped with cameras and analytic tools to monitor how many people are in the park, but will not be used collect personal data or scan/identify individuals.

Just received the most Singaporean pandemic content from a mate based in the little red dot pic.twitter.com/vqgnQ5F4D9

The robodogs, known as SPOT, speak in a robotic female voice and deliver gentle reminders like “Let’s keep Singapore healthy,” and “For your own safety and for those around you, please stand at least one meter apart. Thank you.”

So far, the robodogs have been met with amusement and not people screaming and running for the hills. That’s likely due to the fact that Singapore has already introduced a similar robot, National water agency PUB’s O-R3, a four-wheeled autonomous robot originally used for surveillance, which is now patrolling and broadcasting messages about social distancing. Singapore is also deploying drones to count the park’s visitors.

SPOT was deployed in the parks because O-R3 is unable to handle the rough terrain. Naturally, SPOT reminds us of the Black Mirror episode “Metalhead” where robot dogs have destroyed most of civilization. The episode was in fact inspired by Boston Dynamics creations.

And while the robots may be unnerving to some, they will likely be a very useful tool to combat the spread of COVID-19. Having these robots in the parks lessens the need for human staff to be onsite and potentially exposed to the virus. SPOT is also being used at the Changi Exhibition Centre, which currently being used as a Community Isolation Facility, housing individuals with mild symptoms of the virus. The robodogs have been delivering meals and medicine to the patients to reduce exposure.

Depending on how the two week trial goes, we may see more robots deployed in the battle to fight COVID-19. What a thrilling/frightening prospect, depending on your level of robot apocalypse paranoia.

What do you think of SPOT? Are you amused or terrified by these robopuppers?

(via The Straits Times, image: screencap/CNA)