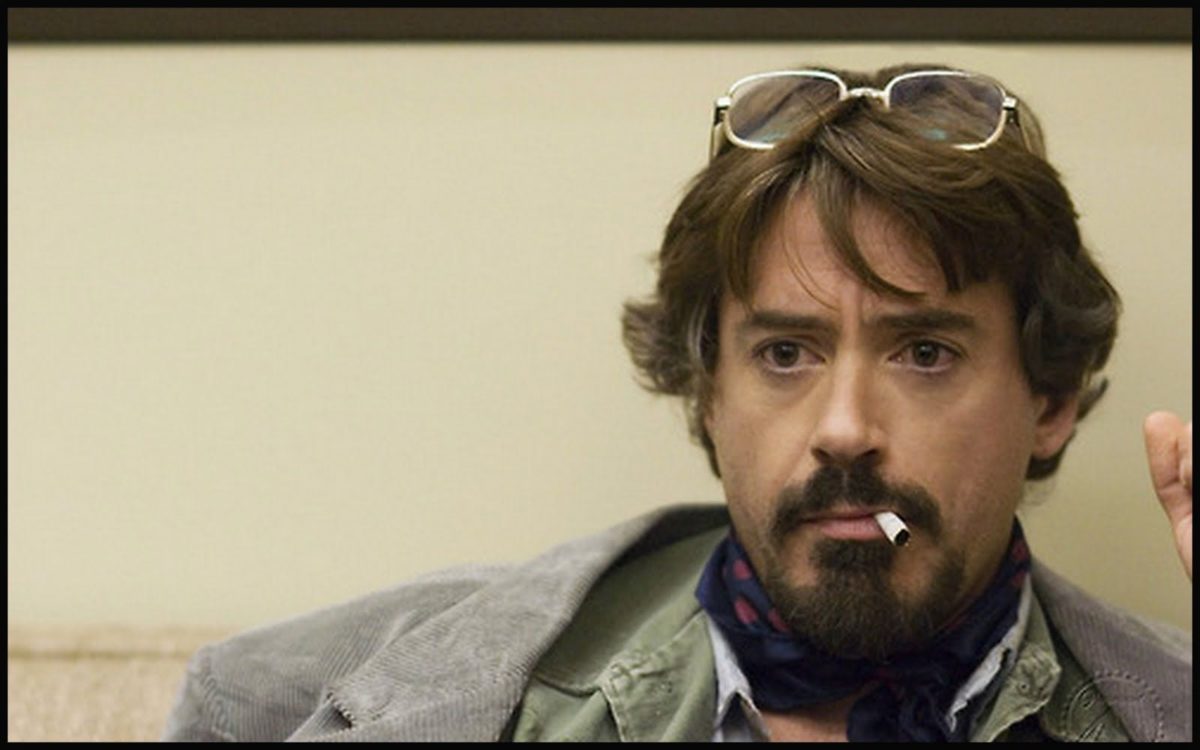 I’m a person who likes to watch the complete filmography of actors I enjoy. I did it with Harrison Ford, with Chris Pine, and now, I’m currently finishing up my journey through the long road of Robert Downey Jr.’s career. Now that I, seemingly, have unlimited time to just watch movies, I’m realizing that there are movies where RDJ has the best looks, and so, for your reading pleasure, I’m here to provide you with my favorites.

With a career that spans from the ’80s to now, there are plenty of Downeys to love. The dirtbag energy of the ’80s bled into the heartthrob vibe of the ’90s, and then we got seasoned Downey by the time he reached his Tony Stark status. So, why not tackle your viewing pleasure with a few of these classics?

Please be aware that this is not a complete list. Every Downey movie provides us with a brilliant look, but this is a list of some of my personal favorites (I did not put my favorite Downey movie on this list because Julian in Less Than Zero isn’t what I would deem a good “look”).

So, here are my favorite looks from Robert Downey Jr.’s filmography.

A movie that single-handedly changed my life, Zodiac is one of the few movies that is nearly three hours long that I will willingly watch over and over again that isn’t Avengers: Endgame. Based on the killings of the Zodiac Killer in the San Francisco area, the movie is a serious look at the “cold case.”

I honestly don’t know how to describe it other than a cold case, because they never caught the Zodiac Killer, but what Zodiac does do is give me Robert Downey Jr. as Paul Avery serving looks for those nearly three hours. Trust me, I would die for Paul Avery.

Kiss Kiss Bang Bang is a movie where Robert Downey Jr. and Val Kilmer just talk about what an idiot is for an extended period of time. Harry Lockhart (Downey) is a crook who ends up landing a role in a movie in Hollywood and reuniting with his childhood sweetheart, all while dealing with a private eye named Perry (Kilmer).

While a movie that I could watch over and over again without pause, it’s here for Downey’s look over the actual movie. (Again, I would like Kiss Kiss Bang Bang played at my funeral.) Throughout the movie, he has a series of little cuts on his face, and they’re hot!!! I don’t make the rules!

Peter Wright in Only You.

A movie made for maybe only me (get it?), Only You features Robert Downey Jr. falling in love with Marisa Tomei in Italy. Faith Corvatch (Tomei) is from Pittsburgh and decides to go to Italy in search of her love. She’s convinced herself since childhood that she’ll fall in love with a man named Damon Bradley and goes there in search of him.

The problem? She meets Peter Wright, who lies and says he is Damon Bradley, and she falls in love with him instead. The movie is Robert Downey Jr. in ’90s fashion, and he’s normally wearing sunglasses of some kind while quoting Roman Holiday, so honestly, a vibe for ME.

Soapdish is the movie that gave Carrie Fisher and Robert Downey Jr. scenes together. So honestly, it’s worth a watch for that alone, but the movie is also set around a soap opera and those in charge of it. David Seton Barnes is the head writer, worried about making sure his show is acceptable while trying to also have sex with the star, who refused to sleep with him until he killed off Celeste Talbert (Sally Field).

A sex-starved Downey with suits and glasses? Yes please, give me more of this. I’d take Soapdish 2: Thirty Years Later if I have to.

Hank Palmer in The Judge.

Look, I get it. Many people do not like The Judge. Those people are wrong, but whatever. That’s on them, not me. When his mother dies, Hank Palmer (Downey) has to go home and deal with his father Joseph (Robert DuVall), brother Glen (Vincent D’Onofrio), and brother Dale (Jeremy Strong). A big-city lawyer, he calls his father the Judge, because … well, he’s a judge.

Quickly, the movie changes from a man mourning his mother to a man helping to defend his father in a murder case, so it’s a real 180 flip. But what’s important about The Judge isn’t really any of that. It’s Robert Downey Jr. giving you a lawyer who has a cute kid who is just trying to do his best in this world—meaning lots of gingham, lots of suits, and lots of joy for me, personally.

Peter Highman in Due Date.

If you think back to the times of Joker, when director Todd Phillips repeatedly went on a rampage about the state of comedy, I liked to bring up the fact that Phillips’ Due Date is a perfect movie. A father-to-be named Peter Highman (Downey) is trying his best to get home to his wife Sarah (Michelle Monaghan). I like to think of Due Date as a sequel to Kiss Kiss Bang Bang because Michelle Monaghan was also Downey’s love interest in it. ANYWAY.

It’s a movie where Robert Downey Jr. is disheveled in a button-down shirt with a little dog and Zach Galifianakis driving around in a car. Other than that, it’s just funny and perfect, and I love it with my whole heart, and I’m going to pretend this is Phillips’ most recent movie (yes, I am erasing The Hangover Part II and The Hangover Part III).

This one is hard for me to admit. I came out of Dolittle, a movie that many trashed, and said, “Oh no, he’s hot in this movie,” and I stand by it. Downey spends the movie in these weird stripe pajamas and sails a boat. He also does talk to animals and tries to calm down an anxiety-ridden gorilla, voiced by Rami Malek.

Am I proud that I think Dr. Dolittle is hot? Absolutely not, but it’s not my fault. I didn’t do the costumes for this movie. I wasn’t in charge of hair and makeup. That’s on them for making me feel this way.

I am but a humble servant to the world of Sherlock Holmes. I love it probably more than anything else in the world (minus my superheroes, of course), and I have often found myself fascinated by the inner workings of Holmes’ mastery. So … yes, I think Sherlock Holmes is an attractive man in any situation. BBC’s Sherlock was probably the only time I really was in love with Benedict Cumberbatch. But Downey’s Sherlock? It’s otherworldly.

Shaggy hair, constantly in a shirt with too deep of a v … there’s a lot about the Guy Ritchie films that I absolutely adore, and honestly, if I don’t get Sherlock Holmes 3 sometime soon, I’m going to lose it.

Look, we all know that this was game changing. Tony Stark came into our lives, and suddenly an entirely new generation found themselves thrust into the Robert Downey Jr. fandom. Welcome, my little chickens. Tony Stark is hot, smart, and rich. Thus, my love knows no bounds. Anyway, this gif helped shape so many of our lives, and that’s really all we need to think about.

I don’t know. I’m just trying to bring joy to these dark times, and my joy comes from watching Robert Downey Jr. movies (particularly that scene in Iron Man with the hammer). Maybe just shut your brain off for a bit with stuff like this because it’s fun, entertaining, and a feel-good distraction.

An honorable mention goes to the love of my life, Larry Paul. Ally McBeal is a television show, so it’s not technically part of this list, but here it is all the same.