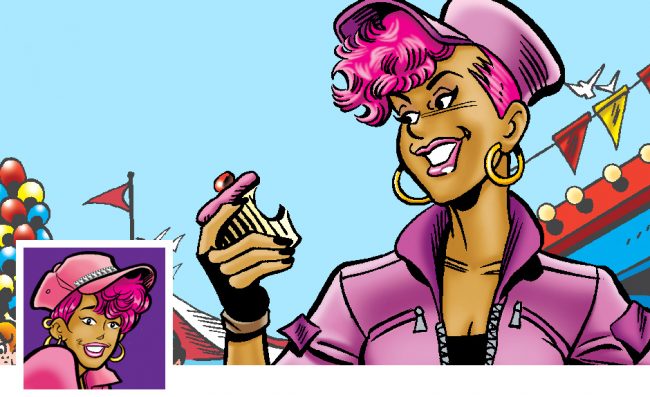 Riverdale executive producer Roberto Aguirre-Sacasa confirmed recently that season two of the CW series will introduce Archie Comics character Toni Topaz, a pink-haired “disrupter” who “famously has as large an appetite for hamburgers as Jughead Jones.”

The role will be played by Vanessa Morgan of The Shannara Chronicles and My Babysitter’s a Vampire, and in the Riverdale version, Topaz will be “a member of the Southside Serpents and she’s going to be a friend and confidant to Jughead Jones.” Aguirre-Sacasa also adds that the character’s sexuality, implied to be bisexual in the comics, “is something that we’re going to explore.”

Now, the introduction of another LGBTQ+ character and a woman of color is definitely something to celebrate. Topaz sounds like a badass already, and I’m ready to see her burst in, burgers and girlfriend in hand.

However, Riverdale‘s relationship to LGBTQ+ representation as well as characters of color in the first season definitely left something to be desired, which means I have some hesitation about immediately celebrating the news. The erasure of Jughead’s asexuality is still a huge sore spot for fans, the relationship between Betty and Veronica was seen by many as queerbaiting, and most of the characters of color got pushed to the sidelines as the plot progressed.

Additionally, Aguirre-Sacasa implies that Topaz may become a roadblock for Betty and Jughead’s relationship, stating:

“Bughead is pretty strong, and pretty undeniable, and pretty epic, but you know even the most epic of romances has trouble — and trouble often comes as a third party. So yes, it is conceivable that Toni will potentially test the limits of Bughead.”

The homewrecking bisexual, or the bisexual who can’t be trusted, is a common image in media, and having a bi character will be little comfort if the representation falls into damaging tropes. However, the producer’s comments are relatively vague, and it’s not impossible that Topaz could end up being a valuable friend who maybe gets misjudged by the gang. Additionally, Aguirre-Sacasa seems somewhat aware of the troubles that plagued the show’s more marginalized characters in season 1.

“I think the one thing that we wanted to do in season one that we didn’t get a chance to was explore some of our secondary characters,” he says, highlighting that the 22 episode-long season will include “our biggest and our strongest Kevin Keller episode” as well as Josie becoming “much more part of the gang.”

Are you looking forward to seeing Toni Topaz join Riverdale?