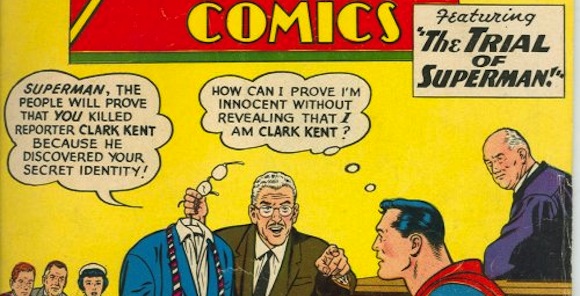 In the ’70s, Warner Bros. agreed to allow a window when the heirs of Jerry Siegel and Joe Shuster could claim their ownership of the rights to Superman and his origin story. Now that it’s actually coming around, they’re fighting tooth and nail to prevent the Shusters from submitting their claim, and to overturn the 2008 ruling that said the Siegel family had partial US rights to the character. Accounts of the proceedings do not paint Warner Bros. in a particularly nice light. In fact, they make them look like jerks.

To that end, Warner Bros. demanded access to some documents that they said “contain a formula for how the two estates will share proceeds on Superman once they successfully terminate Warner’s rights to the lucrative franchise.” The Siegels’ lawyer maintained (and was upheld) that the papers fell under attorney-client priveledge. …and then it gets complicated.

After Warner Bros. went on the offensive last year, it again demanded access to the consent agreements. This time, with the help of new lawyer Daniel Petrocelli, it argued that the agreement itself was a violation of the Copyright Act and couldn’t be insulated from discovery. Warners based the claim that the agreement was illegal on a Ninth Circuit decision (Milne v. Stephen Slesinger) that said that third parties who haven’t yet attained copyright control in a work couldn’t traffic in future interests.

The prior case, however, didn’t address this particular situation, where the heirs of the original creators apparently agreed to negotiate together, and not grant future interests to anyone, including Warners.

Reviewing the situation, U.S. Magistrate Judge Ralph Zaresky won’t settle the question of whether such an agreement does in fact violate copyright law, but says that Warners’ assertion that it is illegal does not necessarily make it so. “Discoverability…cannot turn on whether Plaintiff ultimately proves to be right in its characterization,” writes the judge in an opinion issued on Monday.

The question of Who Owns The Copyright to Superman is a long and involved one, so for the whole story we recommend Wikipedia. There’s a lot of interesting stuff in there in regards to the anti-creator-owned slant of the mainstream comics industry in America.