Alien Prequel is No More, Now “Prometheus” Instead 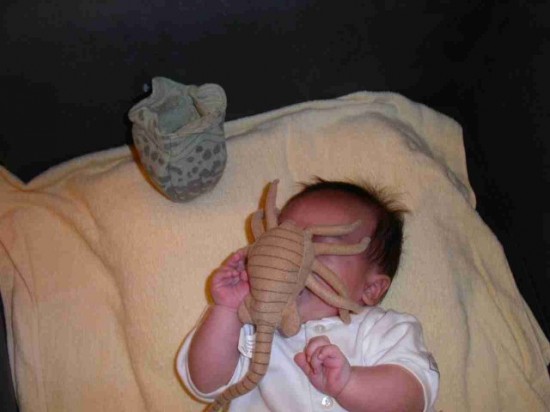 The highly anticipated news that Ridley Scott would be returning to his seminal science fiction setting, the Alien series, has evolved, or, perhaps metamorphosed.  Yes, the joyful facehugger of Ridley Scott and H. R. Geiger creating a prequel to Alien about the briefly and mysteriously featured space jockeys has disappeared, only to be replaced by the chestburster of a completely original science fiction project called Prometheus.

Painful?  Yes.  Surprising?  Perhaps.  But ultimately a happy occasion of new life being born among bloody screams in the middle of an otherwise unremarkable breakfast.

Scott had this to say about the project that the Alien prequel has become, from Deadline:

While Alien was indeed the jumping off point for this project, out of the creative process evolved a new, grand mythology and universe in which this original story takes place. The keen fan will recognize strands of Alien’s DNA, so to speak, but the ideas tackled in this film are unique, large and provocative. I couldn’t be more pleased to have found the singular tale I’d been searching for, and finally return to this genre that’s so close to my heart.

Noomi Rapace is already cast for the movie, with Angelina Jolie and Charlize Theron rumored to be in the running for another lead role.

As much as we love the Alien series, it’s absurdly rare to see original concepts in the big budget sci-fi movie arena these days, so we’ll take it.

With James Cameron having directed Aliens and a sci-fi movie that took place on a planet called Pandora, and Ridley Scott, director of Alien, making a sci-fi movie “rumoured to have an Avatar-style jungle-vibe” that’s called Prometheus, well…

…well we got nothing.  There’s a mythology joke or pun in there somewhere, but it’s eluding us.  …like a xenomorph?