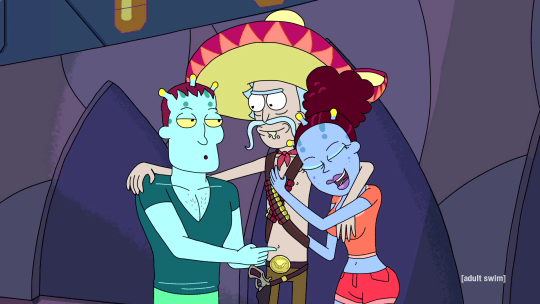 The Recap: Rick, Summer, and Morty run into a former lover of Rick’s, a parasitic hive mind named Unity who’s recently taken over an entire planet. Rick rekindles the relationship, leading the two of them into a spiral of destructive behavior with disastrous planet-wide effects.

I spent an inordinate amount of time trying to come up with a buffer for this recap, and it fought me every step of the way. This episode is perfectly competent in terms of technical elements—the Event Horizon riff that introduces Unity is a really nice isolated sequence, the simplicity of the alien designs allows for a lot of individual variation while getting across that they’re all pulled by one puppeteer, and as always the show has a good eye for slipping in licensed music stingers as an extra bit of gut punch—but it all feels terribly beside the point, deliberately held back to give the script a chance to shine. Even the sex shenanigans, which feel like a place where the show could easily cut loose, are left at the edges of the proceedings. We, like Rick, are not allowed an out.

So let’s start with Rick and Unity, in the name of having at least a breath of triumph. Because conceptually, there is a lot about Unity that makes me absurdly happy. It doesn’t have a gender, first of all—both Summer and Rick refer to the collective hivemind as “it” no matter what body it’s possessing at a given moment, and at the very least Summer strikes one as the type to use a being’s proper pronouns (fun fact: “it” is something like “queer” in that it has a history of being used as a slur, but has also been reclaimed by some non-binary people; ask before you use it, basically). And the general tenor of Rick and Unity’s mutual attraction, a queer relationship if ever there was one, is an achievement on the level of one Captain Jack Harkness. And this is going to require a little history, so sit tight.

First of all, Rick not being straight has been a confirmed thing since this year’s Comic Con. In the middle of riffing about what undisclosed facts the audience might want to know about Rick, co-creator and majority of the voice cast Justin Roiland casually dropped the fact that the character is pansexual (that’s being attracted to someone regardless of gender). And while there was some rejoicing, some shrugging, and some saying “okay, sure,” there was also a surprising amount of pushback within Internet discussions. A lot of “oh, he must’ve been joking,” with a fair amount of implicit “why would you assume a character is queer without it being stated, repeated, and then signed in triplicate with infant blood.” Which is a whole bag of annelids regarding queerness as punchline and the defaulting of heterosexuality that we don’t have time to get into today; suffice it to say, this episode put an extremely satisfying sock into those arguments.

And even better than the fact itself is the execution. The designs of Unity’s hosts (something about those atrocious jumpsuits, I think), not to mention the whole “unified species performance” thing, put me in mind of the famous Star Trek TNG episode “The Outcast.” For those of you who may not know or remember, that was the one where Trek thought maybe kinda they’d like to do a metaphor about homosexuality … only to fumble it completely by making the alien an escapee from an agender race who wanted to present as female, and then casting a cis female in the role so that her ensuing relationship with Riker is basically a vanilla flavored heterosexual one pretending to have something to say (and given the fact that the persecuting aliens have a butch vibe, they might’ve even gone into a wholly different wince-worthy territory. I digress).

The point being that Unity does that sci-fi trope of “the metaphorical queer” one better on every level. Harmon’s mentioned a few times that one of the goals in the writers’ room is to take familiar storytelling devices and then break them, and this is a triumph of that mentality. Because Unity does work as a metaphor: its hivemind nature serves as a comparison and contrast to Rick’s warring need to be alone and to subsume himself in others, and a question of whether the need for community outweighs our often stated preference for individuality. It’s just that the metaphor isn’t an excuse to hide some squeamish expectation that in the wide world of the cosmos every relationship would still somehow manage to fall into a relatively modern form of Western binary heterosexuality. Oh, and as a nice topper on the cake Unity is a really charming character, clearly sketched as sweet-natured and ambitious but lovesick even speaking from all those mouths. I hope we see it again someday.

And—I promise we’re almost done, and then we can move onto the suicide stuff you darling monsters—the extra delightful twist of it is how casual the actual sexual preference part of their relationship comes up. One of the great hand-wringing complaints often levied against the inclusion of queer relationships or individuals in popular media is that it seems “forced,” as though every new introduction would by needs hold the frightened viewer’s hand like some special from the 80s. In response, here are Rick and Unity: Rick’s only gendered request regarding partners has to do with his daddy issues audience, he’s fawned over and appreciated by male and female presenting hosts (and the giraffe, which in the spirit of references I couldn’t help reading as a nod to the Jack Harkness/John Hart conversation about the poodle); and neither Morty nor Summer (of course not, they’re modern teenagers) bring gender up at all when confronting Rick about his relationship. There you go. It’s as simple as a character making a passing comment about someone of the same gender, or referencing a past relationship, and then the adventure story moves on. Can we stop pretending it’s some kind of Herculean feat now, MCU?

Okay. Let me just blotch the still dripping tears from my keyboard, and we can continue.

I kid, of course. The bleakness of those final two minutes defies the catharsis of tears. Starting from the fact that you can see the components of the machine while Jerry is rifling through drawers, meaning that this thing was ready to go at a moment’s notice, and ending with that unspeakably agonizing shot where an entire night and ensuing day goes by without a single soul, not even Morty, coming to check on him. Rick might’ve screwed up his relationship with Unity on his own, but nobody deserves that kind of loneliness.

And the worst of it is that there’s really no support network for Rick at this point in the game: Beth is too afraid that he’ll leave to push him to improve, and too caught up in how she’s idolized him over the years to really pry into what makes him tick; Jerry has a massive inferiority complex over the whole affair, and Rick doesn’t have an ounce of respect for him anyway; Morty is well on his way to becoming a less drunk version of Rick (it was somewhere between horrifying and fascinating to watch the B-plot play out as essentially a season 1 adventure with Summer replacing Morty’s role), and is already starting to pull away from his grandpa; Summer is the closest to understanding what makes Rick tick and is willing to engage with him honestly on it, but she also has arguably the fewest emotional walls of the core cast, and frankly any teenager would get dragged right down into the abyss if they tried to hold up Rick’s decades of issues.

The show’s dabbled in nihilistic sentiment before—the show’s most quoted line, after all, is about how our existence is inherently meaningless—but that blow has always been softened by pushing the relationship between the Sanchez/Smith family to the fore. Pulling that away is potentially a very, very powerful tool, playing on our trust that eventually those interpersonal bonds will eventually come back to the fore. And it’s an issue worth exploring, as Beth and Jerry’s argument calls out the fact that Rick often matters more as a catalyst for other people’s revelations than he does as a human being in his own right. This is a lot of trust to ask from an audience that’s put a lot of emotional investment into this dark little world—I have all my digits crossed that it pays off.

So, how will the preview that seems to be about spontaneously appearing wacky sidekicks throw us all into unplumbed depths of despair next week?

Vrai is a queer author and pop culture blogger; some people drink to block out the pain, they retreat into their favorite Gross Old Men crossover. You can read more essays and find out about their fiction at Fashionable Tinfoil Accessories, support their work via Patreon or PayPal, or remind them of the existence of Tweets.