The Mary Sue Giveaway: Season One of Dan Harmon and Justin Roiland’s Rick and Morty 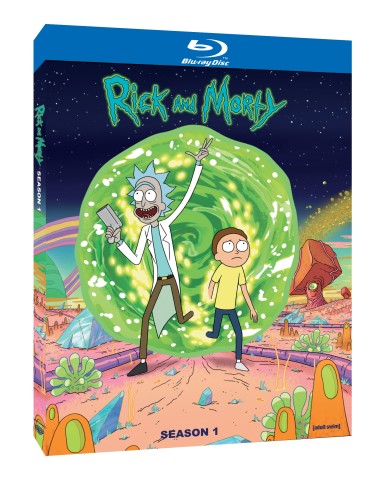 Feeling Dan Harmon withdrawal while you wait for season six of Community (Shirley-less, sadly) to come out on Yahoo!? We have a solution: Check out the first season of Adult Swim’s Rick and Morty, co-created by Harmon and Adventure Time‘s Justin Roiland and hitting shelves on October 7th. We even have some Blu-ray copies to give away, plus some Rick and Morty shirts, because we’re cool like that.

To enter, follow us on Twitter (that part’s important, or else we can’t DM you if you win) and tweet the following (and exactly the following, with no changes, additions, or subtractions):

Not enter to win a copy of Rick and Morty from @TheMarySue? #IdBeMortyfied!

All entries must be received by Monday, October 6th at 10am EST. Three randomly selected winners will get a Blu-ray copy of Rick and Morty: The Complete First Season and a Rick and Morty t-shirt. The contest is available to residents of the US and Canada only. (Though if you live outside the US and Canada and have someone inside the US or Canada you can have the Blu-ray and shirt shipped to, well, there’s no way we’d be able to tell, is there?)

Not sure whether you want to enter? Let puppets convince you:

And here’s the boring, press release-y, non-puppet info on what you’ll be getting:

It’ll be out of this world, Morty! This October, Adult Swim’s interdimensional – and unsuspecting – space crusaders Rick and Morty will make their home entertainment debut with the release of Rick and Morty: The Complete First Season. Available October 7 on Blu-ray™, and DVD, the release features all 11 hilariously-frantic first season episodes plus a healthy dose of bonus materials including an exclusive, 16-page comic book created by Dan Harmon (Community) and Justin Roiland (House of Cosbys), as well as guest commentary tracks from industry luminaries like The Simpsons writers, Pendleton Ward and Kent Osborne (Adventure Time), and Robert Kirkman and Scott Gimple (Walking Dead). Other bonus features include an extensive behind-the-scenes featurette, deleted animatics and creator commentaries and animatics for each episode. Additionally, the title’s Blu-ray version will also include a digital version on Digital HD with UltraViolet Packaged in custom-designed slip case, the Rick and Morty: The Complete First SeasonBlu-ray and DVD release is an impressive home video debut for one of Adult Swim’s most popular series. Plus,

After missing for nearly 20 years, Rick Sanchez (Justin Roiland), a genius scientist, suddenly arrives at his daughter Beth’s (Sarah Chalke) doorstep looking to move in with her and her family. Beth welcomes him with open arms, but her unremarkable husband Jerry (Chris Parnell) is less than thrilled about the reunion as Rick’s arrival shakes things up around the household. Rick converts the garage into his personal laboratory and gets to work on all sorts of dangerous sci-fi gadgets and contraptions, which wouldn’t be so bad if he didn’t constantly involve his grandchildren Morty (Roiland) and Summer (Spencer Grammer) in his insane – but wildly entertaining – adventures that transcend space and alternate universes.

Created and executive produced by Dan Harmon (Community, Channel 101) and Justin Roiland (Adventure Time, House of Cosbys), the half-hour, animated comedy series is produced by Starburns Industries, a groundbreaking animation production studio based in Burbank, CA. Under the creative partnership of Dan Harmon, Dino Stamatopoulos (Moral Orel, Mary Shelley’s Frankenhole), Joe Russo II (The Simpsons, Rug Rats), and James A. Fino (King of the Hill), the company produces TV shows, features, commercials and new media projects.
Throughout its first season run on Adult Swim, the critically-acclaimed Rick and Morty has continued to increase delivery of targeted adults 18-34 and has emerged as one of the network’s most popular series.

As for the shirts, you can pick which one of these two you want. They’re both available for purchase at Hot Topic. 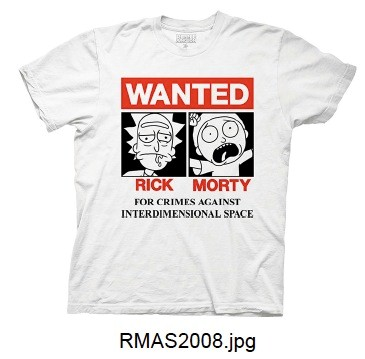 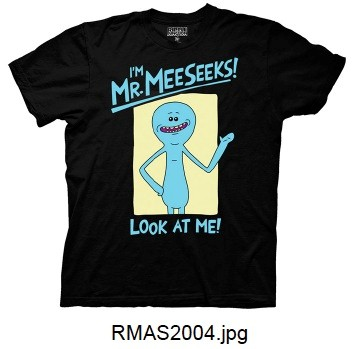