Richard Blumenthal May not Have Fought in Vietnam, but at Least He Fought Wii Beer Pong 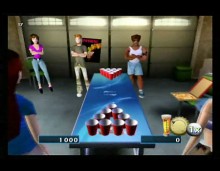 Richard Blumenthal, a Democrat running for the U.S. Senate in Connecticut, is currently getting flambéed on the political Internet over a New York Times bombshell which charges that Blumenthal never served in Vietnam, despite his statements to the contrary in at least one speech. Over on Boing Boing, Cory Doctorow as much as calls Blumenthal a liar.

True/Slant’s Michael Roston points out that as damaging as the Times‘ report may sound, it’s worth asking whether Blumenthal actually brought his supposed Vietnam service all that much: Aside from one 2008 speech in which he uttered the unfortunate words “We have learned something important since the days that I served in Vietnam,” the Times has no hard evidence that he serially touted Vietnam as a selling point for himself. Still, this all sounds pretty bad on paper, and Blumenthal — formerly the clear frontrunner — is in trouble unless he can seriously turn things around at his press conference at 2pm this afternoon.

What’s the geek angle in all of this, you ask? Well, gamers of all political affiliations may feel some bit of schadenfreude over Blumenthal’s current troubles when they remember that one of the ways he tried to make a name for himself was by leading a grandstanding campaign against the evils of Wii beer pong in 2008.

Yup: As Attorney General of the State of Connecticut, he made headlines for himself by randomly singling out a game called Frat Party Games: Beer Pong (which was pretty bad by the way), continuing to hound the game and its makers even after they renamed it “Pong Toss” and removed all references to alcohol — and needled the ESRB to give video games that contained references to alcohol an “Adult Only” rating.

“We stopped this game, but that is only a minor victory if it is followed by others,” said Blumenthal, who believes the game glorifies alcohol abuse and binge drinking.

Blumenthal sent a second letter to the board on Monday, asking that other video games that contain alcohol content be given an adult rating, for users 18 years old and older. He criticized the board for saying the appearance of alcohol in the game was minimal. Blumenthal said the name “Beer Pong” directly refers to a drinking game.

Also, beer is depicted in the graphics used for the game’s title, some of the beer pong tables in the game displayed images of kegs and mugs of beer, and there’s a full bar in the background. “The whole basis for the games is heavy alcohol consumption — simply not appropriate for teenagers and deserving more consideration by the Board,” Blumenthal wrote.

Jaeger said it would be “ridiculous” to rate “Beer Pong” for adult audiences, the most restrictive rating in the system. He said the game “Grand Theft Auto,” known for its violence, was given a lesser “M” or mature rating.

Meanwhile, in the world of things that actually matter — and that Connecticut Attorneys General probably should have concerned themselves with more — a financial crisis was about to reach its full bloom two months later.

Ever since Death Race in 1976, railing against video games has been an easy way for politicians to score cheap political points, and the more recent likes of the Hot Coffee controversy, which even Hillary Clinton got involved in for some reason, and Blumenthal’s Wii Beer Pong crusade show that that tactic sadly doesn’t appear likely to go away anytime soon. Blumenthal’s confusion over his own record in Vietnam may or may not be the death of him politically, but it’s yet another reminder that instead of focusing so much energy on trying to look like moral crusaders, politicians should focus more of their energy on passing laws that make sense.