Rian Johnson Doesn’t Care If You Think Porgs Are Too Cute, They’re Staying 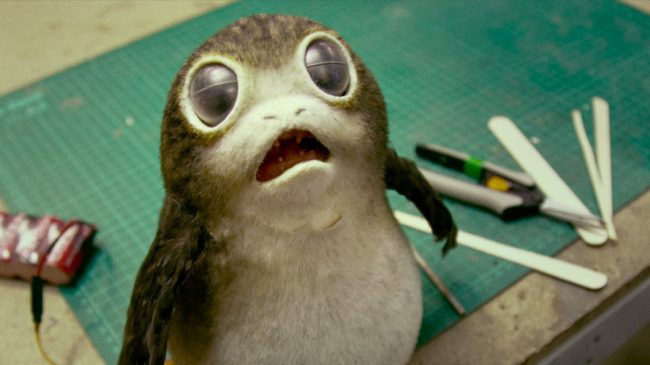 We have made no secret of our porg love around these parts. We’re infatuated with the cuddly, nubbin-toothed space puffins. But not everyone feels the same. Plenty of fans are drawing comparisons to Ewoks and Jar Jar Binks as examples of cute comic relief (which are the words director Rian Johnson has used to describe them) gone awry.

"What if they use it like Jar Jar Binks?" pic.twitter.com/Y6N2jHaoJX

Johnson says he didn’t initially worry about the cuteness levels of porgs until they put all the elements together on-set.

“It wasn’t until we got the actual puppets on set and the whole crew reacted with ‘Oh my god, they’re adorable!,’ and also then a few people in the crew were of giving them that suspicious side-eye of ‘These are cute, but are they too cute?’”

No!  They are just the perfect level of cute. Johnson says that “the overwhelming reaction on set was everybody loved the porgs.” And beyond that, he likes them, and he’s the director so there. “I love ’em, so you know what? I get it if people are a little wary of cuteness in the Star Wars universe, but I personally love them, and I think they have their place in the movie.”

This little porg would like you to know it agrees.

As for how the porgs will factor into the story, Johnson isn’t giving anything away. In discussing how he was inspired by the real-life puffins that gather on the Irish island where the movie was shooting scenes.

He told Yahoo, “I was like, ‘Oh, this is part of the island, we need to find the Star Wars version of this. And then just story-wise—not that they play a big part in the story—but I knew I wanted to find any source of comic relief I could on the island. And so they were very useful in terms of that.”