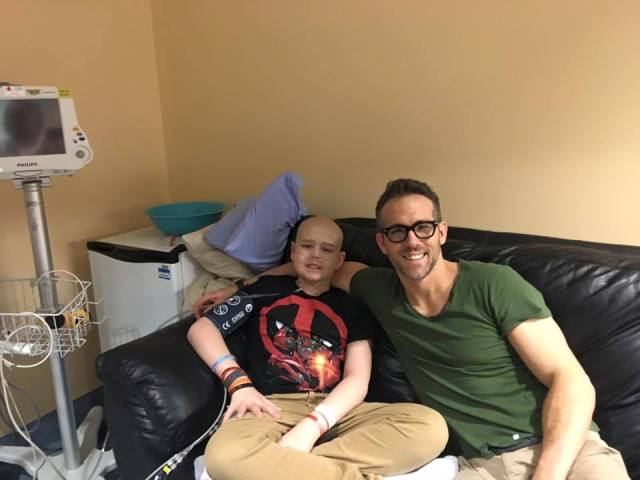 Ryan Reynolds, Mr. Deadpool himself, recently posted a touching tribute to the late Connor “Bubba” McGrath, a 13 year old fan who just passed away from cancer. Diagnosed with acute lymphoblastic leukemia, McGrath reached out to the Make-A-Wish foundation in the hopes of meeting Reynolds, his favorite movie star. According to Reynold’s Facebook tribute, they’ve had at least two meetings, the first of which was a bit of a movie premiere for McGrath, who got to be the very first person to see Deadpool. As Reynolds describes, “I traveled up to Edmonton, Alberta to surprise him with a rough cut of the film. There were still huge sections with wires we hadn’t yet painted out, jokes which weren’t working (and still aren’t) and green screens. Connor didn’t seem to mind. And I’d never felt luckier to get to be Wade Wilson.”

Aware of the fact that he premiered Deadpool to a 13 year old fan, Reynolds had a disclaimer in his post, writing, “***Before you jump down my throat for showing a 13 year old an R-Rated film, please know this kid knew more swear words than a British chef.” Okay, totally fair, I think. Also, come on, anyone who would jump down his throat for showing this kid a movie is probably a jerk. A jerky jerk. (We try to keep it at least PG-13 around here, I suppose. Except for that subheader. Anyway.)

Reynolds’ words are incredibly touching, and it was clear that he was as much of a fan of McGrath as McGrath was of him. It’s really nice to see that he was so well loved, and that he got his wish to see Deadpool. On that, Reynolds wrote about how he believed McGrath pretty much was Deadpool: “We met because he loved Deadpool. In a certain sense he WAS Deadpool. Or, at least everything Deadpool aspires to be; balancing pain, fearlessness, love and a filthy (filthy!) sense of humor in one body. I wish he could’ve stuck around a lot longer.”

At the end, Reynolds called for people to donate to the Northern Alberta Make-A-Wish Foundation, which you can do right over here. You can (and should) read the full text of Reynolds’ touching tribute below or over on his Facebook page.