In the aftermath of Miki’s failed attempt to “win” Anthy’s hand and thus control the fate and graces of the Rose Bride, what troubles and challenges await her and her haphazard fiancée, Utena? Sadly, we don’t get to find out this episode.

I’m going to be honest—as soon as I saw Nanami’s name in the episode title, I made an audible groan. She’s a frustrating character, but I hoped that a her-centric episode would give a little more insight into her character. Alas, if there’s such a thing as too much insight, this is it.

The episode begins with Nanami being followed in the dark. She trips, as scared anime girls tend to do, and narrowly misses getting hit by a car; but, not before seeing a shadow of the person behind her. Later, Nanami, Miki, and Touga convene, wherein Nanami reveals that she’s previously had near-miss accidents before. The men are… skeptical. 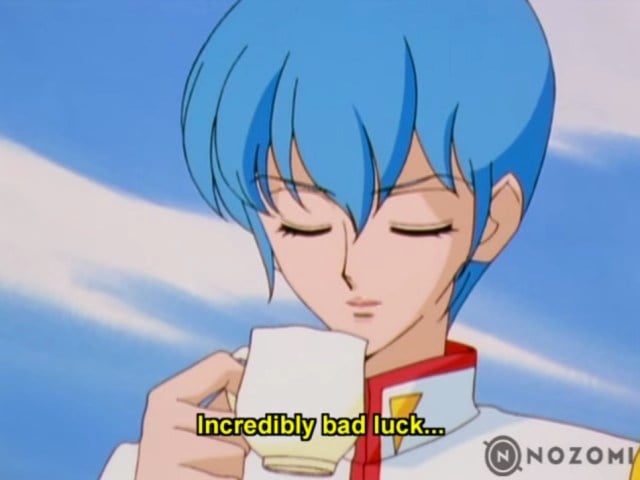 Touga in particular dismisses her fear, telling her that he thinks she’s been reading too many detective novels. While men dismissing women’s fears outright is an unfortunately troubling and commonplace practice, one can assume that their sibling relationship would provide reinforcement for his instant judgment.

That said, Miki is shown hanging out with Nanami because he gets that sibling relationships are weird. (To put it lightly.) He then asks her if anyone would have a motive to hurt her. (Her friends epically sell her out, upon hearing that—”Her policy is not to get her own hands dirty.”)

Right after that moment, Utena LITERALLY THROWS A BASEBALL INTO NANAMI’S FACE. Based on what she sees as constant attempts to take away Touga’s attention, Nanami accuses Utena of wanting to hurt her her. Then, Miki points out that there’s a “KEEP OUT” sign on the greenhouse door because Touga is speaking alone with Anthy.

“Why won’t you finish the job?” Touga wants Anthy to kill… something, but she doesn’t want to. Nanami, at this moment, thinks that the target is her. She then has a nightmare fantasy (visualization?) of Touga and Anthy professing their love for each other and being together after she’s dead.

Nanami, never one to fear confrontation, slams open the greenhouse door and accuses Touga of plotting her murder. She then flees the scene, conveniently right before Anthy and Touga reveal: they’re discussing roach killer to deal with the greenhouse. (Notable: Touga files this grounds upkeep under his important student council duties. But what about the End of the World, dude?!)

Nanami, for her part, starts running through the school halls crying, until! A runaway horse (don’t ask, it’s Utena) charges through the hall toward her. Inexplicably, there are also chickens? Regardless, she’s pushed out of the way in the nick of time by what looks like a tall blonde dude.

When Utena hears that a prince saved Nanami, her interest is piqued (naturally); the name she and Nanami and the rest of the school hear, in connection with the case, is Mitsuru Tsuwabuki. He had bandaged her hand after the rescue, and then mysterious left.

Miki and Utena follow Nanami; after seeing her pass a gym teacher (Miki and Utena speculate on that relationship, which is GROSS), they then see her approach an old dude who gives her directions, and then, what is quite possibly the strangest thing to happen on the show thus far.

Turns out, Mitsuru is a CHILD. NANAMI ASKED AN ELEMENTARY SCHOOL KID OUT. Of course, she’s only supposed to be like, -500 years old (or something like that), but it’s still WEIRD.

Utena and Miki, to their credit, immediately speculate that Nanami’s mostly acting out her weird feelings for Touga. (Commenters from a few weeks ago: I GET IT NOW.) Could one call it a Creon complex? (I know, I’m stretching.)

For what it’s worth, Nanami doesn’t treat Mitsuru like a “boyfriend.” Instead, he’s shown carrying her stuff… helping her cheat on tests… physically supporting her… wait a minute.

(Aside: CAN WE APPRECIATE THAT SAIONJI’S FIRST POST-DUEL APPEARANCE IS THIS.) During the episode’s climax, Nanami deploys Mitsuru to take on and take out (in the fighting way) her former (age appropriate) suitors. The boy manages to defeat all three (!) older boys, but is pretty badly hurt after.

Utena, gods bless her, calls out this treatment, calling Mitsuru merely Nanami’s lackey, versus someone she actually likes. But Mitsuru reveals why he’d been right there to save Nanami before: years ago, a rampaging bull had gone after her, when Touga saved her in the knick of time. Mitsuru saw that, and has spent the years since trying to emulate Touga’s big brother spirit. He’s been “rehearsing” saving Nanami—meaning he’s the one who’s been lowkey scaring her silly.

Nanami, meanwhile, has been recording this weird confession, and immediately denounces Mitsuru’s actions and intent. But before that, Mitsuru had plotted one last perilous prank: a runaway, boxing kangaroo makes a beeline for Nanami. Mitsuru takes a hit, but he can only take one.

Seriously, what was that? I read a few other comments suggesting that there are several episodes that are Nanami-centric, but do they all focus on the frighteningly intimate bond between her and her brother? How does she feel about Touga’s other playboy proclivities? What parts of this feed into the actual Utena/Rose Bride mythology? Um, until next time?

Tweet your thoughts on Episode 6 of Revolutionary Girl Utena to me here. This should go without saying, but NO SPOILERS PLEASE!

Lilian Min is an associate editor at HelloGiggles and has written for The Atlantic, Nylon Magazine, BuzzFeed, and others. Read her other work here and tweet her here.