"If we don't crack the world's shell, we will die without being born." 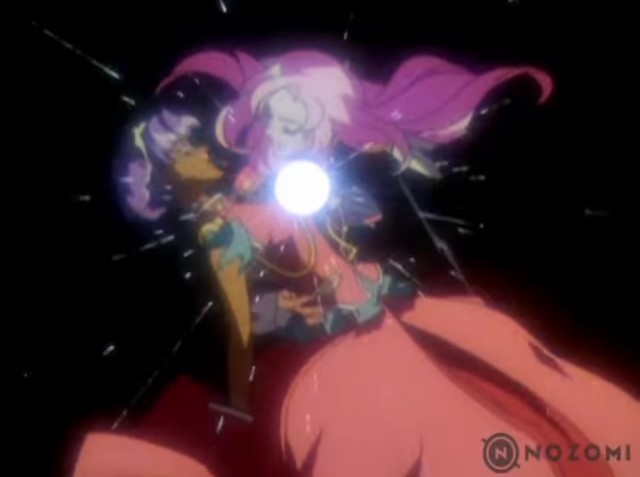 There’s still a lot I don’t understand about Revolutionary Girl Utena. One: For such a populated school, the teachers sure don’t seem to be doing anything. Two: Why is Utena’s boy’s uniform different from literally every other male student’s? Three: For someone with such a pivotal place and with such power in the Dios myth, Anthy’s passivity as a character is frustrating—like a chess queen only allowed to move as a pawn.

But, all of this makes for good TV. Let’s get into it.

Despite the events of the last day(!), in which she fought a duel against the student council vice president and won herself the engagement of the Rose Bride, AKA a weird girl named Anthy, Utena’s pretty unfazed. The same can’t be said for her tittering female fans, who embody every aspect of the term “girl crush.” 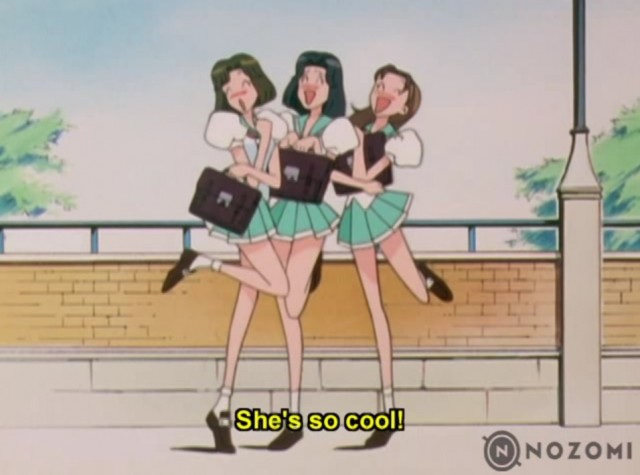 This is not heterosexual.

As Utena goes to class, she does have flashbacks—not to her duel with Saionji, but to what happened with Wakaba, who’s dejectedly reading. Utena attempts to cheer her BFF up, and asks her what’s the plot of the story. After being a bit cold-shouldered, Wakaba reveals that it’s the tale of a girl rejected by a guy; however, a new guy shows up the next day, and the heroine ends up with him. 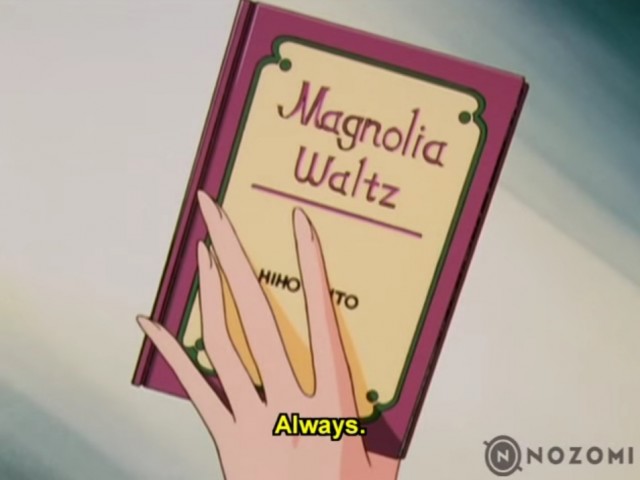 You could probably tell that from the book title, to be honest.

As such, while she’d mocked the story before, now she loves it, and also shows how much she loves Utena, her “true love.” This should get weird when Anthy shows up in the class, but it doesn’t, because the show cuts away in that moment. 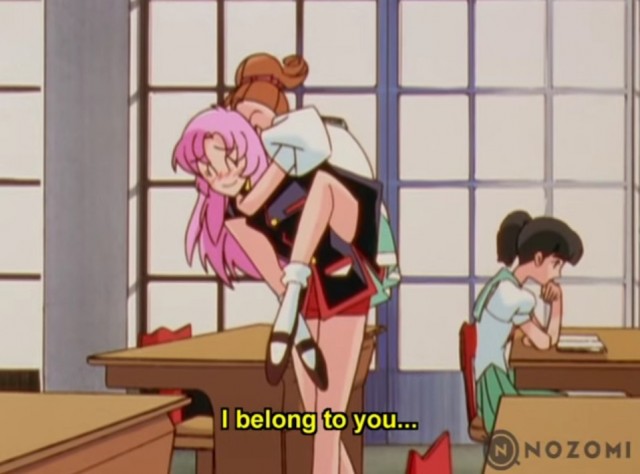 Pretty sure this line is repeated verbatim by Anthy.

What warrants such an important cutaway? Why, student council drama (love the organ musical cues), in which red-haired Touga and two other hair colors (blue and orange) discuss their need to “crack the shell of the world,” with Touga comparing to the student council as a chick that needs to, well, crack its hatching shell in order to make it into the world alive. This entire process, the shell-cracking, is presumably the revolution they all speak of.

As for how it’s being brought about: the members of the student council all receive letters from the End of the World and follow the instructions therein. Orange is worried about Utena’s entrance to the duels, which are revealed to be only an elite kind of battle limited to rose seal possessors, which had previously only meant student council members. 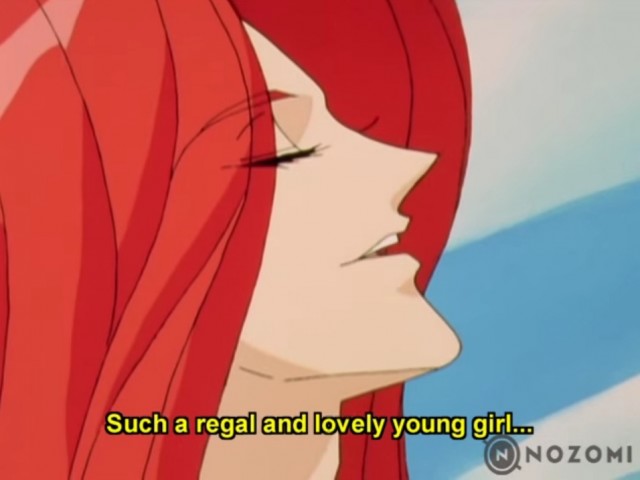 Though Orange is fearful of Utena and the uncertainty that she brings, Touga makes the point that there’s no dropping out of the revolution game. (To underscore the point, all three are playing a card game.) As it was the student council members’ rose seals that brought the dueling arena’s phantom castle “down,” they must figure out how to crack its implicit code. But, what exactly does that mean?

Weirdly enough, for a show that requires a suspension of much disbelief immediately, it’s quick to give some concrete answers: As Touga explains, whoever wins the duels thus wins the hand of the Rose Bride, and can enter the upside-down castle. This in turn will bring “revolution” to the world. Sounds simple enough!

Back to our heroine: Utena learns that she’s got a single in the barely-used East Dorm, a decision made by the student council. This places the past day’s event as happening over the first day of school… except, a night’s already passed, so where did she sleep then? Who cares about continuity, when instead we can watch Utena land in her decrepit dwelling. 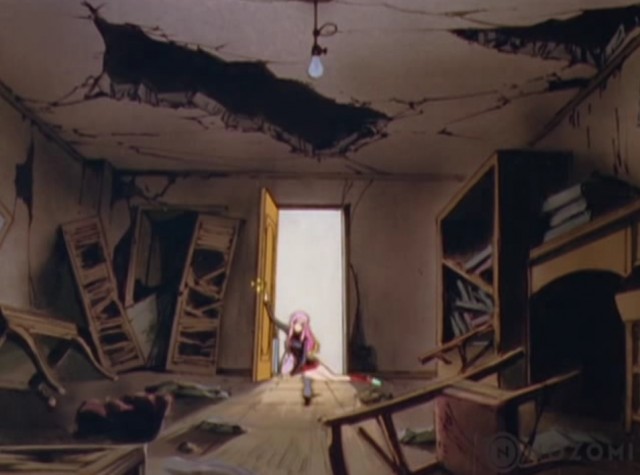 However, Utena’s room isn’t this glorified kindling cave—instead, she’s assigned to a further interior room, and it’s clean, sparkling, and totally hospitable, thanks to a maid outfit-wearing Anthy. Wait, what? 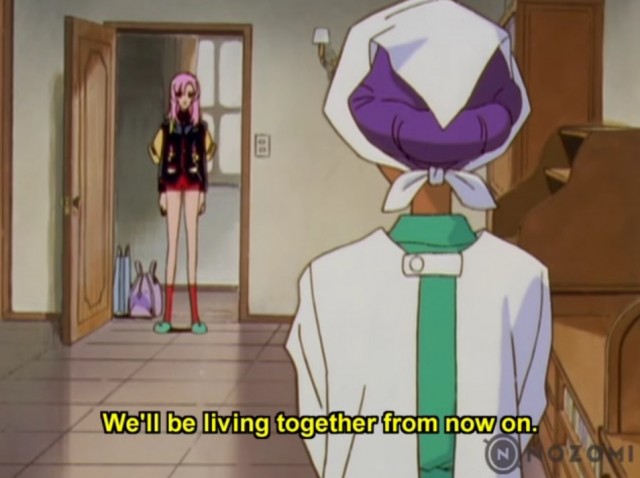 Utena takes the loss of her creepily isolated single room well; now, she’s still creepily isolated, but at least she’s got a roommate, albeit one assigned by “the rules of the rose seal.” (When Utena questions Anthy’s adherence to the rules, the latter questions the former’s adoption of the boy uniform. It’s a moment of “Too real” for Utena, who’s generally quite chill.)

Scratch that: Utena’s got two roommates. The second is Chu-Chu. 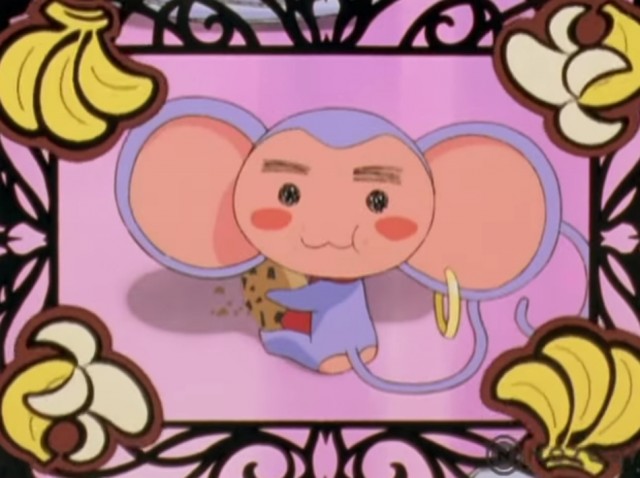 Then, Utena asks Anthy an even realer question: What’s up with her ring? Anthy explains that all the members of the student council, who are also generally the only people in the school who are duelists, wear them. She explains to Utena that she’ll have to fight more duels; Utena doesn’t like that prospect, calling the battles “pointless.”

(This entire scene is filmed in a beautiful panning shot. Bless you, animation.)

Someone who doesn’t think the battles are pointless? Saionji. 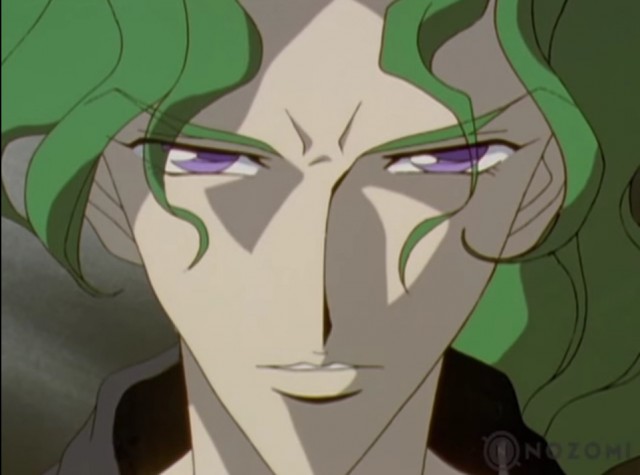 Toujou confronts a steaming mad Saionji in the kendo club practice room, and reveal the multiple layers of shame that Saionji feels about being beaten by a middle schooler (!) when he’s the high school kendo club captain (!!). He also feels, essentially, entitled to Anthy and her Rose Bride status; or rather, he feels entitled to be the person bringing about the revolution of the world, and seeks Anthy as the key to get him to that point. 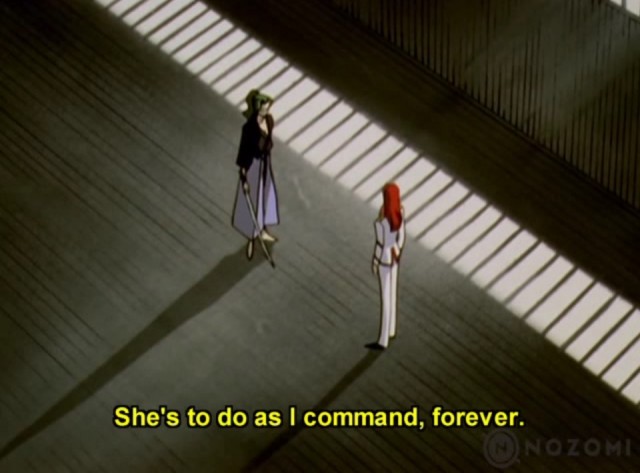 What a trash bag.

However, his entitlement doesn’t come completely out of nowhere: Apparently, he’s been keeping an “exchange diary,” presumably of the one-way missives that the End of the World sends each member of the student council. Toujou’s surprised by this, and by the fact that Saionji’s missives apparently guaranteed his “ownership” of the Rose Bride; could it be that Saionji’s violated some sort of protocol? We won’t know right now, because the scene abruptly cuts off.

Utena waits for dinner in an empty-except-for-her dining hall, only to be rushed by a frantic Chu-Chu. The reason for the critter’s distress: Saionji’s out in front of the building and tries to command Anthy to follow and serve him. When she declines, stating that their engagement was broken the moment Utena beat him. He HITS HER, and as a result, I want to SMACK HIM THROUGH THE GROUND.

Luckily, Utena’s there to lash back at him, yet when he challenges Utena to another duel, she initially declines, stating again that she wants no part in whatever’s going on. But, after Saionji threatens her enrollment at the school and then STEPS ON CHU-CHU, Utena reluctantly accepts. 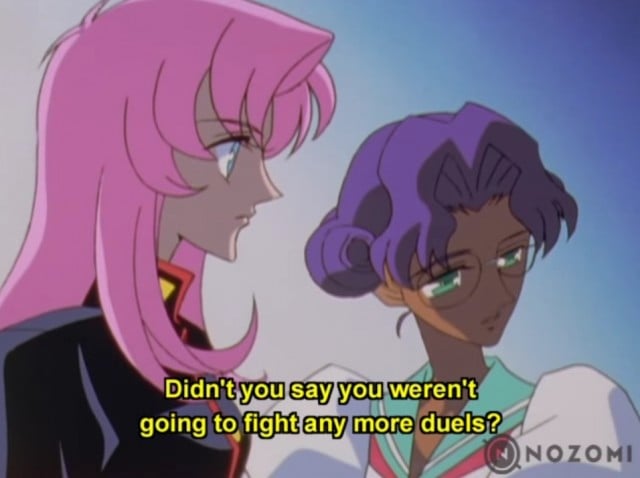 Privately, to Anthy, she reveals that she’s going to throw the match. Anthy’s voice actor shifts tones subtly by the end of the scene; it’s a well-played move, as it clues the viewer into the fact that while Utena still sees this match as something she alone has to deal with, ultimately, it’s Anthy whose fate hangs in the balance. She already knows what Saionji would do should he “win” her back; having to hear Utena, her momentary savior, literally pledge to return her to that situation must, to put it lightly, suck.

Another duel, another ominous shadow narrators skit: But this time, they foreshadow that Utena’s plan to fail, will fail. 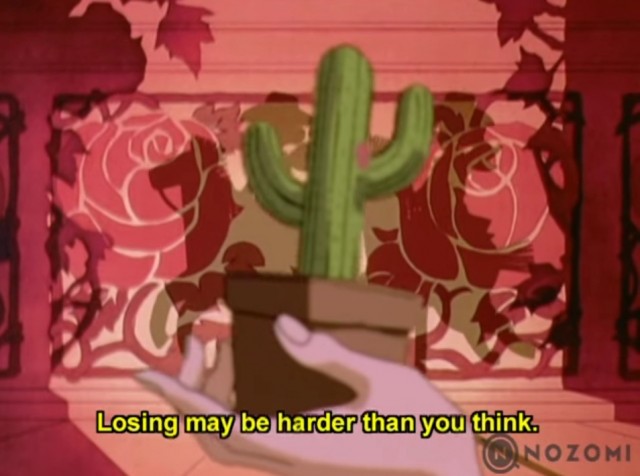 Should we all have this problem in our lives.

The entrance sequence to the forest platform is then totally recycled, except! While ascending the spiral stairs, Anthy bestows Utena with some magic gifts: Some totally sweet epaulettes, a gold chain, and a fancier jacket trim. (A note: After watching the opening more closely, the spiral is the stem of a rose, with the stadium platform being a rose. The adherence to theme in this show is ridiculous.)

Even with the outfit upgrade, Utena’s still committed to throwing the match, and even says so to Anthy. Whose fate. Will be determined. By said match. 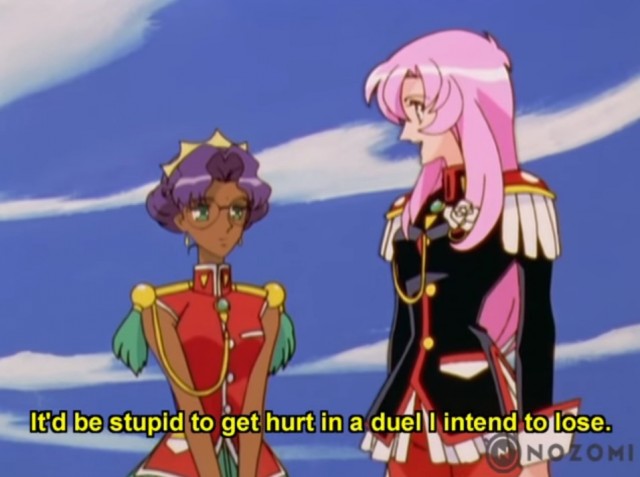 “Stupid” is certainly a word that comes to mind.

However, Utena’s not so committed to throwing the match that she won’t accept the Sword of Dios. So, she and Saionji face off, and he immediately goes on the offensive. (And, the background singing voices start chanting prehistoric periods and other random names? Just roll with it.) But the Sword isn’t enough—Saionji explains that it’s not inherently powerful on its own, which explains why he got owned while using it in the previous day’s battle. Now though, he’s on his A-scumbag-game, which is why he drop kicks Utena and then prepares for a finishing move which looks awfully close to a killing stroke!!!

Then: A choochoo train sound cue (this made me laugh a lot), and the spontaneous creation of a light link between the floating castle and the arena floor. A ghostly spirit descends, and it’s none other than Utena’s fairytale prince! 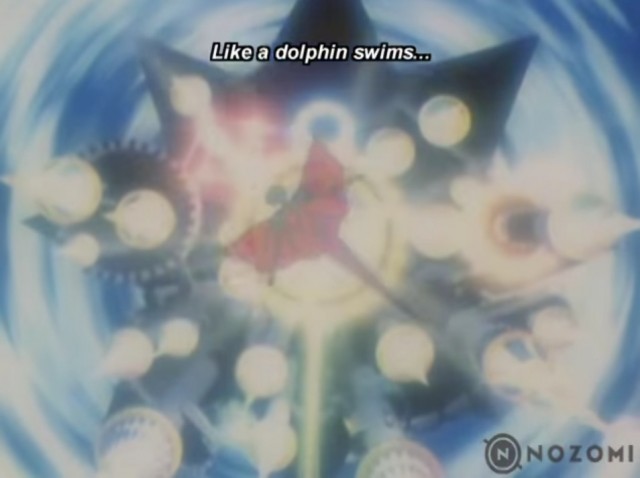 Weird song lyrics subtitle aside, this moment legitimately made me gasp.

Inexplicably, the moment the prince possess Utena is censored by a giant white rose; as is the moment that Prince!Utena slices Saionji’s sword and his rose in one stroke, leaving the green-haired asshole in shambles.

Toujou, creeping as usual, is dismayed: “Was that the power to bring the world revolution? The Power of Dios?” For a group that’s supposedly so plugged in, the student council sure seems like a bunch of dim bulbs.

Saionji perhaps put in his place for good (perhaps I should start referring to him as Kyoichi…), the un-prince-possessed Utena returns to her and Anthy’s place. When the latter asks why she didn’t throw the match, Utena fronts like she did it for Chu-Chu’s sake. It’s unclear if she’s aware of how exactly the prince took over for her, but it is clear that she really was fighting for her life, and implicitly, Anthy’s out on the arena floor. 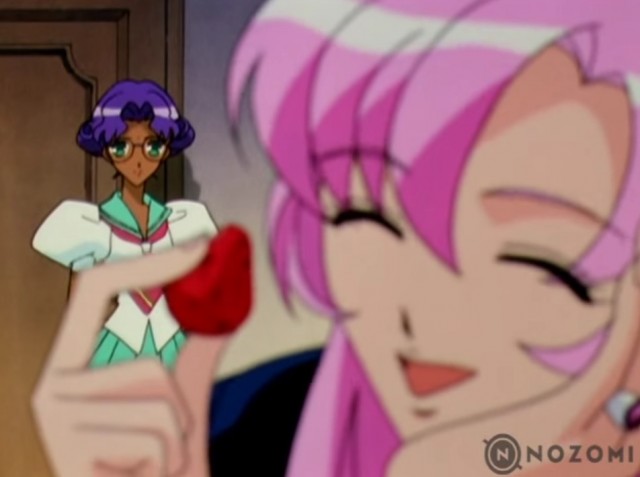 This is only going to get more intense.

Like any good show, Revolutionary Girl Utena only answers enough questions to birth more questions. What’s up with Kyoichi’s correspondences? Who are the other student council members, and are they also hungry to be the ones who unlock revolution? Is it really a spoiler alert to suggest Utena might be the one who brings about revolution when that’s literally the name of the show? Until next time.

Tweet your thoughts on Episode 2 of Revolutionary Girl Utena to me here. This should go without saying, but NO SPOILERS PLEASE!