"Well, this is a good chance for you to be a normal girl, isn't it?" 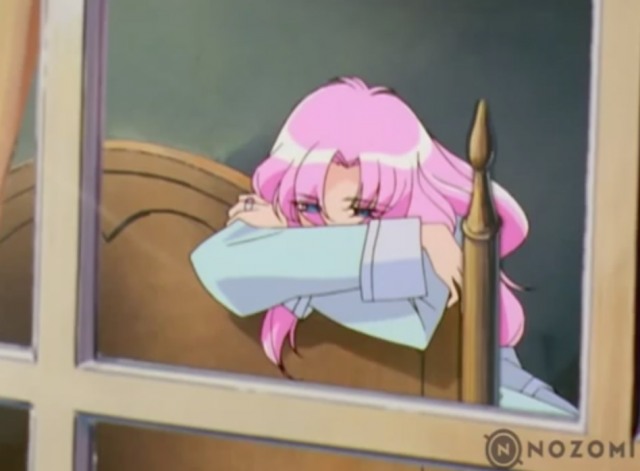 Well. The aftermath of last week’s episode was a real bummer, but the show has miles to go before it sleeps. So, it followed up last week’s bleakness with something that was both sad and reflective, while being utterly fantastic. (I am writing this in the aftermath and am SO HYPE.) Let’s dig in.

After Utena’s duel against Touga, she’s in shambles while he keeps crowing on about how well he’d played her. With the Rose Bride by his side, he saunters away while the light drifts out of Utena’s eyes.

The next day, she isn’t in class. Wakaba, gods bless her, notices and goes to visit Utena in her now-mansion-for-one—Anthy’s name card has been taken from their shared chambers. Wakaba, who doesn’t know what’s up, thinks Utena’s just playing hooky and teases her about it.

But Utena’s reminiscing about Anthy and Chu-Chu’s departure, a quiet, formal affair set to unsettling music. The only thing that snaps her out of it (a theme that comes up again and again in this episode) is Wakaba pointing out what Utena’s lost: in this case, her slashed boys’ uniform jacket.

Wakaba wonders what Utena’s now going to wear. But, well, Utena’s got a back-up plan, and it’s a doozy.

Literally every single girl at the school swoons at the sight of girl uniform Utena, with some even saying they prefer it to her boy uniform. (BLASPHEMY!) Utena, for her part, tries to internalize this new “normal,” but then Anthy says hi, seemingly oblivious to how Utena’s feeling. This leaves the pink-haired girl even sadder, and even as she gets screamed into the school, she has a gloomy face on.

During the student council meeting, Touga flaunts Anthy’s engagement to the other members. Jury and Miki, for their parts, look ill at ease, with Jury even bringing up the fact that Touga laid down a real plot to ensnare both Utena and Anthy. She says this with spite; Touga accepts it as praise.

Later, Wakaba frustratingly tries to pick a very sad and despondent Utena’s brain. Touga and Anthy then waltz up (more like just Touga) to ostensibly check out the sight of Utena in her lady uniform. Touga, smug bastard that he is, actually asks Utena out, on a one-on-one date, in front of Anthy, and then puts his arm around her. Wakaba, GODS BLESS HER, objects and screams at both Touga to leave Utena alone, and Utena to stand up for herself.

But Utena is a zombie, unresponsive both to Touga’s puppeting and Wakaba’s anguish. So, Wakaba decides to throw a glass of water onto Touga, who appears to dodge it—leaving it to land on Anthy. (At least, this is how the scene read to me.) Wakaba is apologetic at first, but then turns on Anthy as being the source of Utena’s dazed state. This, finally, gets Utena to wake up, and the first thing she does: SLAP WAKABA. But it’s okay, because WAKABA SLAPS BACK, and even throws back the line, “Well, so you CAN still react to some things!”

Touga, however, continues to creep on Utena, essentially making a date. But as Anthy leaves, Utena hands her a monogrammed napkin. Anthy’s non-response seems to deepen her sadness again, but when Wakaba tells Utena that she’s gonna get her out of this, Utena seems more despondent than before.

Later, Touga and Anthy are having tea. Or rather, Anthy has tea while Touga chats with a girl on the phone; he abandons Anthy to meet with her, leaving Anthy to imagine that Utena instead is the one having tea with her. This is the first confirmation the show ever gives as to the depth of Anthy, not the Rose Bride’s, feelings for Utena. Get ready for more ~*feels*~.

Post-slapping meltdown, Utena meets Wakaba on one of the school’s many rooftops. Utena tries to apologize, but Wakaba initially doesn’t have it—until she finally admits that she doesn’t know anything. She asks Utena if Touga’s the one behind the pink-haired girl’s sadness, and then starts crying, essentially over how Utena’s personality and appearance have done a 180. Utena tries to explain her new normal, leading Wakaba to shout, “Not being normal is normal for you!” Utena slips back into sad silence, and Wakaba continues to scream “Take it back!”—”it” being Utena’s bold, non-normal, cool self. While this initially irked me a little (let a girl have her sadness), Wakaba’s insistence ends up coming off more as cathartic than pesky, as Utena realizes that yeah, she misses Anthy a lot, and perhaps more importantly, she misses herself a lot. And then she declares: “I’m going to take back who I was.” YeaaaAAAAAAHHHHH!!!

Touga, that piece of shit, is kissing a girl (perhaps the one he’d spoken to on the phone, perhaps another) in the greenhouse while Anthy is there in the background. And then Utena strides in. Touga thinks she’s given in to his creepy offenses, but instead she challenges him to a duel right then and there.

Shadow Girls: This episode’s riff is a study in “normal” vs. “not normal,” and it’s a cute celebration of weirdness, even if they jet off in a UFO at the end.

With a new entrance sequence and rock-based, non-vocal music, Utena (in her girl uniform!) strides into the dueling forest with a special sword in hand. It’s from none other than Jury, who had told her that it’ll help set “the last scene”—leading me to wonder how much the other student council members know, beyond Touga’s knowledge.

As the duel’s about to begin, Touga reveals what he believes is his trump card. The Rose Bride can bless (or rather, channel her spirit into) his already magical sword, giving it extra supernatural powers. IN THIS MOMENT, Anthy herself finally speaks; not a line of dialogue, but an actual internal thought. Alas, it’s to downplay Utena—”She can’t defeat Master Touga. I pity her. I wonder if it will end quickly”—but still.

True, the duel isn’t going well for Utena. Her uniform is (tastefully) ripped to shreds, her sword is broken, and both Touga and Anthy believe she’s going to lose. Yet, Utena rallies, and explicitly states that the reason she’s here is to take back herself.

Anthy thinks on Utena’s impending loss, until! She remembers another time when this scenario played out… with none other than Utena’s actual purple-haired prince. Touga’s sword’s blessing breaks, and Utena charges.

Utena rips his rose to shreds; Touga is dismayed, and Anthy is in tears over the memory she’s suddenly recovered. And after the duel, a ripped-up Utena walks home with her Rose Bride, as if nothing (but everything!!!) has happened.

I was shocked at how well this episode pivoted between Utena’s sadness and her regaining of self-respect, and really appreciated how even as Utena stated her goal of self-rescue, it was tacitly tied to Anthy’s self-awakening. How does this change the course of the show? What will Miki and Jury have to say about these events? Can we get a scene where Utena punches Touga out? Until next time.

Tweet your thoughts on Episode 12 of Revolutionary Girl Utena to me here. This should go without saying, but NO SPOILERS PLEASE!