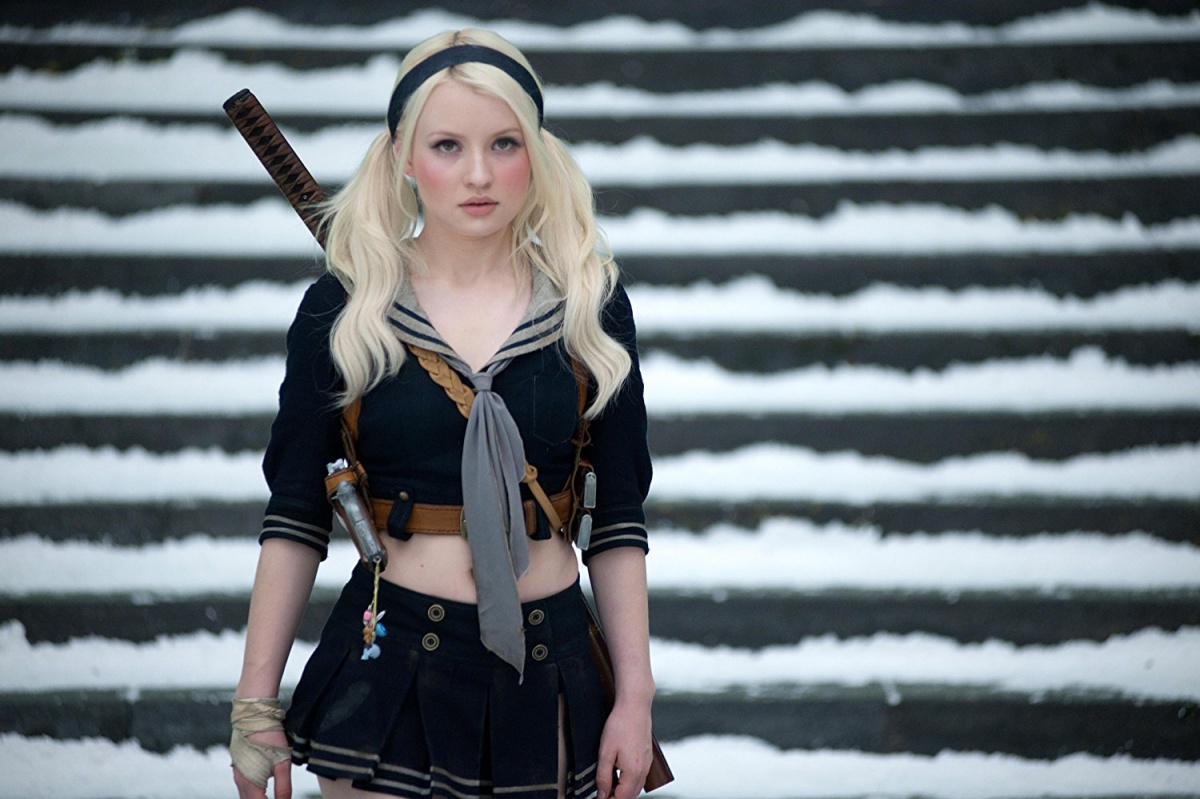 In 2011, I had just started blooming into the feminist I would become, and the movie I’d been looking forward to for months was Zack Snyder’s Sucker Punch. The promos looked cool, and I loved the cast (forever baes Emily Browning and Jamie Chung).

However, the day it came out, my favorite movie review site at the time (Spill.com) said it was “some ol’ bullshit,” and I went into the movie deep in trepidation—but I liked it. A lot. Then I went online to see what feminists thought of it, and they … also hated it. I read so many saying that, if you liked that movie or thought it had feminist elements, you were in no way a “true feminist” so naturally, like my good sis Anne Shirley, I was in the depths of despair.

Eventually, I decided that it was just going to be my problematic fave. I got the Blu-ray (it was the first Blu-ray I ever purchased) and the art book, and I locked it away. Now, seven years later, as a much more hardened feminist, what do I think of Zack Snyder’s first original film, and fifth movie overall?

I still … really enjoy it. Now, does that make it a good movie? No. It still fumbles a lot, and the way the plot puts itself together falls apart, but the story is enjoyable, and throughout the film, I couldn’t help but wonder about the standard for which we call a movie feminist or not. Sucker Punch, for all its ills, passes the Bechdel Test with flying colors, features women of color, and its setting alludes to historical institutional problems where women could be locked up in asylums just because men willed it. In fact, Harlots (the best show you aren’t watching) just covered that ground in its recent episode.

Rewatching the movie, two things came through my mind: Wonder Woman and The Yellow Wallpaper, by Charlotte Perkins Gilman (who is a racist). I’m not sure which of those two texts would be more controversial, but we will start with the academic one just for giggles.

Gilman’s The Yellow Wallpaper is a short story, written in 1892, that became a seminal proto-feminist text that most college students read at some point in a gender studies course. Written in a gothic fashion, it’s about a young woman whose husband sends her on a “rest cure” because she is on the verge of a nervous breakdown. She’s brought into a room, a nursery, with barred windows, yellow wallpaper, and torn floors that indicate she is not the first person to have been taken there for those purposes.

Throughout the story, the narrator tries to advocate for her own health, but is told she’s being irrational and that trying to have some autonomy is another sign of her instability. This discussion was what led feminist critics to view the texts as critical to the way mental illness was used to entrap women, keep them in subjugation to men, and strip their power away.

The madness that these women fell into was then seen as a way for them to be free, mentally, in a way that they could not be in the physical realm. While this reading of it has some abelist undertones, what it’s saying is that “madhouses” often functioned as a way to keep women under control and to lock away any who stepped out of society’s norms.

How does this fit into Sucker Punch? Well, that is essentially what the film is about. Babydoll is sentenced to an asylum after accidentally killing her sister, after an attempt to kill their stepfather. There, in order to keep her quiet about the attempted rape and other underhanded business, her stepfather pays for her to be lobotomized. Lobotomy has been a major part of feminist discourse, because during the ’40s and ’50s, most lobotomies were given to women and people of color. A lobotomy was done to reduce the symptoms of mental disorder, which would come at the expense of a person’s personality and intellect. If that was something you didn’t value in a woman, then so be it.

In order to prevent her own lobotomy, Babydoll creates this whole story within her own mind, giving herself strength and power she does not have. One of the things you will notice is that she is a bad shot in real life (that’s why her sister is dead), but in her fantasy, she’s a fantastic shot and warrior, saving Rocket when she could not save her own sister. The story blurs its lines and has an unreliable narrator in Babydoll (much like The Yellow Wallpaper), because ultimately, this is all her mind’s way of coping with the trauma of what’s about to happen.

Okay, that’s the academic nerdy stuff. Now on to the actually nerdy stuff: Wonder Woman. Did you remember that Sucker Punch also has a big No Man’s Land scene where the women cross the line and basically shit all over World War I? I didn’t, but watching it, I couldn’t help but think, This movie feels like a DCEU movie in a lot of ways.

There is no sense of weight in anything, even though, during the hand-to-hand sequences, the women feel strong—Vanessa Hudgeon’s Blondie and Rocket especially. One of the big complaints about the film, when it came out, was that the fantasy sequences gave no weight to the battle—even though, for the past dozen comic book movies, people have been fighting CGI creatures—and that it didn’t have a strong ending. Well, well, well … that sounds awful familiar, doesn’t it?

Directly comparing Wonder Woman to Sucker Punch in terms of representation of women, they are also still very similar. Diana’s costumes are no more inherently functional or “conservative” than the women in Sucker Punch; there are actually more women throughout the entirety of the film, the women are fighting for their own freedom and sisterhood, and there is no love interest. Also, there are more named women of color in Sucker Punch than Wonder Woman.

Then, there is also the question of what it means to have a female empowerment fantasy? What does that look like? And the reality is that isn’t a question with one answer. There are women who can feel empowered by Wonder Woman, and those who can feel equally empowered by Sucker Punch. I enjoy the video game sequences in the film and honestly, in today’s superhero landscape, they feel pretty on brand with how fight sequences play out in current films.

So where does Sucker Punch go wrong? Really, it mostly comes from Zack Synder having playing with concepts his script can’t do justice. He wants to have this thoughtful narrative, but can’t help playing into tropes of the threat of sexual violence and rape, which is legitimate in this situation, but excessive in a story that tries to avoid showing sexy dance sequences in exchange for action sequences.

Just in terms of plot, it starts to lose steam around the 4th sequence, which is getting the knife. The story rushes to get to its conclusion because there really is nowhere else for it to go. That unwinding taints the goodwill and fun of the rest of the movie as it tumbles into the end. As much as Snyder may say that this film is attempting to call out the nerdy sci-fi dudes who are into fanservice, I think he is giving himself a little too much credit on that regard.

I mean why not just make a movie for the girls who play video games and would want to play a game where they could play as badass female characters? In the end, it is that lack of introspection, not the CGI monsters and not the outfits, that stops this movie from being worthwhile in feminist discourse. This isn’t to say that a male creator can’t make a female empowerment narrative, but they can’t do it when they are more focused on doing “take that” to guys and not thinking about the women who could be watching.

The “Snyder Cut” of Sucker Punch does include a scene of Babydoll and The High Roller, played by John Hamm, where they have sex, and it is a pretty good scene with a focus on female pleasure, which is pretty hot especially because it’s John Hamm. Plus, there’s something poignant about seeing one woman give up her freedom for another woman; I just wish it could have been Blondie or Amber.

Here’s the thing about problematic faves of all kinds: a lot of times, we just like a thing because we do. There’s no logic, no explanation; there is just a judgment call. It’s just something we like, and if the internet allowed people to have nuance and didn’t put people on an unnecessary pedestal, we wouldn’t need to carefully curate people’s past problematic goofs or pick at how you could be a FEMINIST™ and also really like Kevin Smith movies.

But because we live in this timeline and not the dream world, we have to sit and pick apart why we like something in spite of itself. Well, you know what? I’m not going to do that with Sucker Punch.

I wish it was a better live-action magical girl anime-inspired movie, but at the same time, I feel like it does a lot of things I wish other more “feminist” works did. Namely, have women who fight and work towards helping each other.