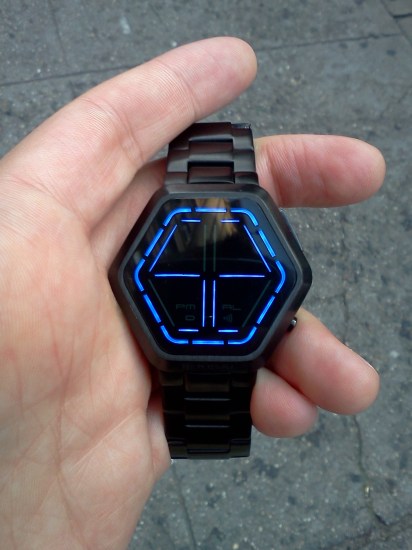 So far, we here at Geekosystem have had the pleasure of reviewing two distinctive Tokyoflash watches, the analog Uzumaki and the On Air. Now, I’m going to finish up the saga with a review of Tokyoflash’s Kisai Night Vision, perhaps the Tokyoflashiest one of the batch. If you want a snazzy conversation starter, this one definitely makes the cut.

Let’s start out with the basics. The Night Vision is a solid little guy. It’s made from black stainless steel, and has a very satisfying heft to it, weighing somewhere around as much as an iPhone. It feels like a $149 watch made out of metal should. When it comes to showing the time, the Night Vision is understandibly eccentric. It displays the time with a subsurface LED display, but the catch is that the display defaults to off, meaning that 95% of the time, the watch is a blank black slate. Considering that I normally rock an all white Nixon Time Teller, this was at once familiar and different. 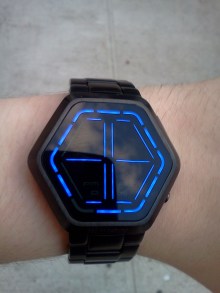 When the watch is actually displaying, it shows pretty standard digital time. The face’s center displays your standard digital style numbers, each slightly skewed to fit into one of the two irregular pentagons that combine to make the watch’s entire hexagonal face. The hour is denoted by one of the small bars along the outer edge, which lines up with the standard position for its corresponding number on a traditional face. When it’s 10 o’clock, the number 10 bar blinks at a rate of once per second, etc. The watch also has a date function, where the day is indicated with the digits, and the month with the hour bars. It’s normal enough to read easily but still weird enough to perplex passersby. The Night Vision also features an alarm, and a togglable animation, which when on, will trigger a flashy display on the quarter hour between the times of 6 PM and midnight.

When it comes to using the thing, there are two buttons, both mounted on the watch’s right side, a longer one near the top and a smaller one near the bottom. On the watch’s left bottom side, there’s a small screw that when removed, gives you access to the small charging port that you use to charge the watch with the included proprietary USB charging cable. The Night Vision also comes with a little screwdriver to help you open and close the port. The two buttons are how you get this bad boy to display. If you hit the longer button towards the top, it triggers the LED display, and shows the time for 10 seconds. The smaller button at the bottom does the same thing, except it shows the date instead of the time.

Those are the basics of how the thing works mechanically, but so what? How does it function practically? In short, pretty well, but make no mistake about it, the Night Vision is totally form over function. 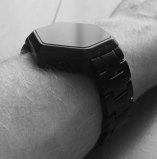 Because you have to press a button in order to display the time, the Night Vision instantly hops down a peg from normal wristwatch functionality, but still stays above that of a pocket watch, or your trusty smartphone. During my first few days with the Night Vision, I definitely encountered times where I wanted to know the time, but was holding something or had my arms crossed. In these cases, it was sort of a pain to have to finagle a way to get that button depressed. About half the time, I just looked around for a different clock. Fortunately, there’s almost always one in sight. The other half the time, I just uncrossed my arms, or got my other arm over or under whatever I was holding. All told, it was a relatively minor inconvenience. Way less troublesome than I expected, and far from a deal breaker. It helps that the thing looks so freaking sleek in off mode.

Contrary to what you might think, having to press a button to turn it on was actually a benefit much of the time. The “show me the time button” can be a little awkward to depress sometimes, and won’t always go in evenly, but it always works and it gives you this rare, fun opportunity to “use” your watch, which is especially fun for the first few days you have it, and still pretty fun even after that. It also draws some attention to the watch (your call on whether that’s good or bad) and, without fail, it started a conversation with any friends or acquaintances the first time they spotted me using it. It’s simple enough that reading it becomes second nature to you in a matter of minutes, but it’ll still confuse anyone who hasn’t seen it before. One of my best experiences was when, out of the corner of my eye,  I caught a woman on the train staring at it after I’d just checked the time. I lit the sucker back up about five minutes later to see if she’d gawk again, and she did. It was a deliciously Pavlovian little power trip.

When it comes to the animation, I initially thought it was the best thing ever, but wound up turning it off after just one or two days. The animation, which you can see in the video below, triggers automatically on the quarter hour, and when on, can help you keep track of the rough time without having to press the button. At first I thought it might totally make up for any inconvenience caused by the button thing, but it’s actually fairly annoying. While it is flashy, it always ends in a flashing :00 whether the time is actually :15, :30 or :45, so really it doesn’t let you know anything if you don’t know roughly how far through any given hour you are. Also, the fact that it only triggers between 6 PM and midnight (and you can’t change that) pretty much robs it of any functionality. I did somehow get it to start triggering at :11, :26, :41, and :56, but I’m pretty sure this was a bug and I couldn’t fix it, so I just disabled the feature entirely and didn’t miss it in its absence. 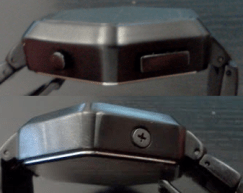 As for battery life, I only got about 48 hours out of it the first time around, but the animation was on and I was playing with it (and triggering the animation through settings) almost constantly. Once I turned the animation off and stopped fiddling with it so much, I got a good week out of it. The only problem there is that the watch has no way of telling you it’s running low on juice except by starting to not work, specifically by displaying the time for only one or two seconds instead of 10. From there, it will last in that limited state for maybe six to eight hours if you’re careful and takes about three hours to fully charge. You definitely have to keep the screwdriver and cable on-hand if you’re reaching the end of the week, or just charge it regularly before it starts getting low.

As you might guess from its name, the display is infinitely better at night, but still works during the day. I found that with the blue display, sometimes I’d have to cup my hand over the face to read it in direct sunlight, but my hand was already over there anyway, so it wasn’t a huge deal. Other than that, the LEDs are delightfully crispy and look sort of like neon lights. If you look closely, you can see they’re actually pulsating insanely fast, which gives the watch a cool sort of strobing effect if you wave it around while on. I don’t go clubbing, but I can imagine this watch would be awesome for that.

All in all, it’s a delightful little bugger, but if you’re considering it, it’s important to be aware that it’s almost more like a bracelet that can tell the time than it is a traditional wristwatch. Still, in this day and age where you’re almost always looking at a smartphone or a screen with the time right on it, or sitting in a car or room where there’s some clock clearly visible, it’s not a huge deal. And if, somehow, you’re in a position where the Night Vision is all you’ve got, it won’t let you down. If you don’t already wear a watch — and I’m willing to bet a lot of you don’t — the whole “button” thing should pose no problem at all. It’s only if you’re used to looking at something more traditional that the button might seem like a hassle. It becomes second nature quick though; in a quick stint with my old watch after wearing the Night Vision for a while, I found myself trying to press a non-existent button constantly, and was kind of sad it wasn’t there.

I’ve definitely enjoyed my time with the Night Vision, and if you think it seems cool, you probably will too. Whether it’s worth its $149 price tag all depends how on much you like to spend on your watches. That said, you need to know what you’re getting into with the whole button thing, and how that works for you depends heavily on how you use your watch, but I found it to be far less inconvenient than I initially anticipated. It’s a good watch, and I like it a lot.

Relevant to your interests in Tokyoflash watches