A wonderfully absurd dark comedy about the two years of required service. 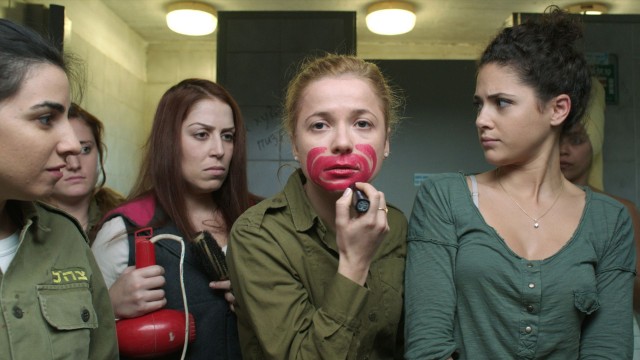 If Stripes mated with Office Space and had a girl baby, you might have something pretty close to Zero Motivation, the nicest surprise to come from the Israeli film market in a long time. Yes, it’s a dark comedy about the two years when young men and women are forced to move away from their families and serve in the military, regardless of their enthusiasm or skills. As we know from experience with our own draft, when people are obligated to service, they may not be motivated to do their best. Necessity doesn’t necessarily breed excellence, and Zero Motivation brings us two of the worst examples of military excellence since Bill Murray and Harold Ramis took up arms in 1980’s stripes.

In many ways, Zero Motivation is very much a film in the spirit of the great military comedies of the past; films that take aim at the demands for rigid obedience which are necessary for effective military command, but suck the life from an individual. From Mister Roberts to MASH, Private Benjamin to Good Morning Vietnam, Zero Motivation is an extension of this film tradition – only this time, about the Israeli army. But Zero Motivation also has elements of a college or camp comedy, as the film derives great humor from showing the pent-up frustrations and uncontrollable hormones that happen when you force young people to live in close proximity. On top of all that, Zero Motivation also feels like a workplace comedy about people forced to do jobs which are mind-numbingly boring.

That is the case for our characters, who are posted in a remote, desert military post where they’ve been assigned to the administrative office (for those who can’t do anything else), run by Rama, in a hilarious performance by Shani Klein. Rama wants to be career military but can’t get her office running tight, primarily due to two workers assigned to her office: the overly dramatic Daffi (Nelly Tagar), who would rather be in the big city office in Tel-Aviv, but is so incompetent she’s been assigned to paper shredding duty; and the even less ambitious Zohar (Dana Ivgy), the lone virgin on the base (or so she thinks), who wants nothing more than to sit at her desk playing Minesweeper until her time is up.

The movie is built on three different stories, each given a different title and focusing on different girls. Each story covers a very different aspect of this kind of life, but ultimately they all build on the other, rather than simply creating an anthology film. The film’s consistent look and style, appropriately sparse but often visually funny, is anchored by the directorial and writing style by Talya Lavie. Lavie lends an unexpectedly zany quality to the film (helped immeasurably by a very good score) throughout, despite a few very dark moments which, tragically, include sexual assault and suicide. Surprisingly, Lavie makes this difficult type of dark comedy work, despite the shocks and disturbing ideas behind it. While I admit to being pretty horrified by the darker moments in the film, Lavie undercuts them quickly, never making the comedy about the victim, nor treating the events lightly. The comedy comes from the empowering and often shameful ways in which the people around the girls handle these dark situations. It can be difficult to include these elements in a film without hurting the tone or characters, but Lavia has talent to spare as a director and storyteller, and does all this with a confidence in her material.

Lavia’s greatest creations in the film are her female characters; not only Daffi and Zohar, but also all the girls who give the impression of this being a true working office, including their growing resentment of one another. Klein is hilarious as Rama, the work horse in the office desperate to prove herself worthy of respect, especially as one of the female officers on the base. In one of the great moments early in the film, we realize Rama can sit in on meetings, but only if her department also brings the snacks and beverages. Another standout in the film is Tamara Klingon as Irena, the modelesque Russian immigrant who might get the biggest laughs in the film in her segment with Ivgy, titled “The Virgin.” Irena is in a lot of ways the Paris Gellar of this group (for all you Gilmore Girls fans), and her reaction to the slackers she’s forced to spend time with is hilarious.

But the heart of the film really are misfits Daffi and Zohar, who create some of the best buddy comedy on film regardless of gender in some time. Their friendship is authentic as two people who found each other because of circumstance, but which ultimately proves invaluable for their sanity. They are like the roommates who become life-long friends or officemates who stay close long after that first job. And they are wonderfully specific and flawed, while somehow seem lovable despite all their behavior. Sure, Daffi is a complainer, but she is so overly-dramatic in her despair, at times becoming tearful over events which really don’t merit such a reaction, she immediately seem like the little sister to Zohar, which makes the third segment even funnier. Zohar, on the other hand, is completely unflappable in her reactions to disappointments and setbacks, unfazed by anything around her. She is like a lot of the sarcastic, ne’er-do-wells we love on film, from Bill Murray to Tim in Life and Times of Tim. Imagine if Ron Livingston’s character in Office Space had been a disgruntled, bored 20-year-old, and you have an idea of Daffi. Igvy is hilarious with her sarcastic comments and creative attempts at rebellion against The Man, forcing her to her spend two years in the desert.

Despite all the many big laughs the film gets, and it really is one of the funniest films of the year, it ends up being a surprisingly profound and moving comedy about friendship, camaraderie and that bizarre period between childhood and adulthood. I’ve heard some critics complain that the film choose not to comment directly on war…but that isn’t what the film is interesting in commenting on; this is a military comedy, not a war comedy. And despite being an Israeli film about a draft the US no longer has, and which never included women, ZeroMotivation is one of the most identifiable coming of age comedies to come to the screen in years.