Review: Women and Reclaiming the Self, at Any Cost, in Swallow 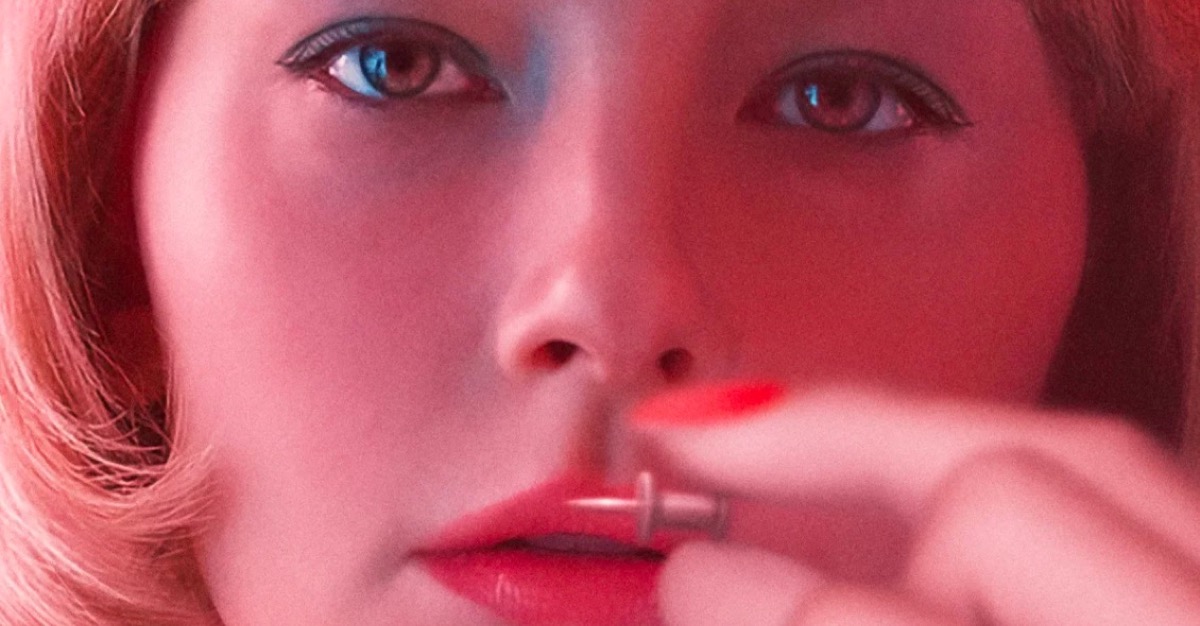 **CW: Discussion of self harm, body horror, and sexual assault.**

A common thread of the female experience is the feeling of being silenced—having any sign of protest choked out of you. Consider gaslighting, abusive partnerships, and the blustering of politicians and other institutional giants that seek to place restrictions on female autonomy. What does a person do when they are being silenced? In some cases, they must swallow their protests; a concept that the body horror film Swallow takes quite literally.

Swallow stars Haley Bennett, Austin Stowell, David Rasche, and Denis O’Hare. The film was written and directed by Carlo Mirabella-Davis and was an official selection of Fantastic Fest 2019 and the 2019 Tribeca Film Festival, where Bennett won Best Actress in the U.S. narrative feature category. In Swallow, cracks begin to appear in the façade of a housewife’s perfect life. As she struggles under the oppressive expectations of her husband, in-laws, and society at large, she begins to enjoy little rebellions—horrific rebellions.

The choice to make Swallow body horror is an interesting one. The entire film is balanced on this façade of stifling perfection. Its hues are cheerfully pastel, and every shot is symmetrical. Hunter (played by Haley Bennett) is reminiscent of the image of a ’50s housewife: polished and soft, beautiful but demure. In the opening act, Hunter functions as a pretty ornament within her immaculate home. The film is inflicted on her, more than she participates in the unfolding narrative—a porcelain doll, pretty, pristine, and totally blank.

As stated at the outset, Swallow is a film about reclaiming the self. It relies on the cracks that appear in that pristine façade. However, cracks don’t appear without pressure, and in the case of Swallow, that pressure comes in the form of unyielding expectations.

Everything in Hunter’s life is driven by patriarchal expectation. She keeps the house the way her husband wants it. All sex is depicted as her on top, doing the “grunt work” for his pleasure and helping him reach orgasm with no hope of pleasure being returned. In every single scene, Hunter is being appraised and adjusted based on what she can do for the men around her, from growing her hair out longer to giving a hug to a drunk at a party.

Hunter’s reclamation of the self in Swallow comes about in two distinct ways: body mutilation as a form of rebellion and the confrontation of her mother’s rapist. In the few moments when Hunter is alone and is able to act independently, she takes to consuming inanimate objects—first a marble, and then progressively harmful items like a thumbtack, each resulting in pain and injury. This transformation is accompanied by an additional transformation: Hunter is pregnant.

It’s not by mistake that Hunter’s particular form of rebellion shows as a private and concealed form of self-harm, one that takes the form of consumption and an invasive presence in the body. Almost immediately, Hunter’s role is reformed from beautiful household ornament to vessel for life, not unlike our cultural separation of a woman as an individual and the expectations of her once she becomes a mother.

This theme has been explored in several recent films, including the 2020 release The Invisible Man. Furthermore, pregnancy represents a time when women must undergo massive physical change while “keeping up” with a figure. The fact that Hunter conceals her harm not just by asserting control over her body, but while eating, is massive.

This entire area of bodily harm in rebellion is reminiscent of the very real phenomenon of “housewife blight,” as discussed in Betty Friedan’s iconic 1963 work, The Feminine Mystique. To summarize, in the 1950s and ’60s, American housewives began to struggle with guilt over being dissatisfied with their domestic lives. This manifested itself in extreme ways.

Women who felt isolated and reduced in their feminine roles would take up tranquilizers and obsessive household scrubbing to work out their anxieties. The bleeding blisters on their hands and arms, from the scrubbing and use of cleaning chemicals, earned the name “housewife blight.”

A key component to Swallow is the expression of reclaiming the physical self, exerting control over the body. As the film progresses and Hunter’s bodily mutilation continues, she becomes more dominant in her relationship. However, that is just, quite literally, what’s on the surface. The most interesting thread of the film is Hunter’s confrontation of the emotional and mental scars.

The viewer learns that Hunter is the product of a rape. This is introduced in a casual and removed way, but the viewer becomes increasingly aware of its impact in Hunter’s life. There is shame and distance in her family, as a result.

When Hunter finally leaves her husband and strikes out on her own, her first stop is to confront her mother’s rapist. She finds him, living as if nothing ever happened and unburdened by the crime. Hunter gets him to confess that the crime was connected to his desire for power, and she now has the perspective that he is a figure that can be overcome.

She leaves, emboldened, in an excellent meditation on the lasting impact of trauma and how we can unshackle ourselves from that guilt. This journey culminates in Hunter aborting the pregnancy, her final tie to her oppressive husband. It is the ultimate declaration of choice.

Swallow masterfully redefines horror to meet a uniquely feminine perspective. It’s a film about female trauma, past and present, and the ability to overcome. Gorgeously executed and provocative, Swallow is one of the most visceral and lingering films you will watch this year.

Caitlin is a sweater enthusiast, film critic, and lean, mean writing machine based in Austin, TX. Her love of film began with being shown Rosemary’s Baby at a particularly impressionable age and she’s been hooked ever since. She loves a good bourbon and hates people who talk in movies. Caitlin has been writing since 2014 and you can find her work on Film Inquiry, The Financial Diet, Nightmarish Conjurings, and many others. Follow her on Twitter at @CaitDoes.