Womanthology might no longer be the most successful comics project on Kickstarter (that honor goes to Rich Burlew‘s recent Order of the Stick project), but for 2011, it was the comics project with the biggest budget, and attracted endorsements and donor prizes from the likes of Neil Gaiman, Jim Lee, Gail Simone, Camilla D’Errico, Devin Grayson, Cat Staggs and Kevin Smith. The project reached its goal of $25k in less than a day, and wound up earning more than $100k in backer funds to print what was intended to be a small self-published run with the now quite interested IDW, the fifth largest comic publisher in the US.

For a project that started as a simple tweet from Renae De Liz and ballooned to a collaboration between more than a hundred female artists, writers, designers and editors, this might be considered enough. With the many faceted goal of showing that there are women in the comics industry, that there are women who read comics, that there are women who want to make comics, and that those three overlapping groups can work together to make more of themselves, that could have been the whole Inspirational Lifetime Movie Story.

But today we get the coda on that story: today, Womanthology: Heroic is available in comic stores and book shops around the country, with all proceeds going to GlobalGiving. Here’s our review:

Well, my review, since while Jill and I are our resident comic nerds, Jill is actually in Womanthology, the lucky duck, so she’s right out of the review writing pool. So, yes, in the interest of full disclosure, my coworker has written a story in this anthology, and so I will not be talking about her piece specifically. (I’ve already told her what I think about it. You’re free to form your own opinion.)

So, the way I see the goals of Womanthology as a book, rather than a project, are as so:

To showcase the talents of its artists, like any good comics anthology, by pairing artists with writers and pairing those teams with editors; and showing off some great stories and art. But in addition to this basic anthology criteria, the book has two other things it’s trying to accomplish.

One, to serve as a leg up and general instruction tool to give hints, tips, and other valuable guides in the general tasks of comic book writing and making, from the mouths of professional comics creators. And two, to get creators to talk about how they got into the industry, and to talk about female comics creators whose careers have passed into the realm of history, at times when one might assume that the mainstream American comics industry was even more male dominated than it is now. 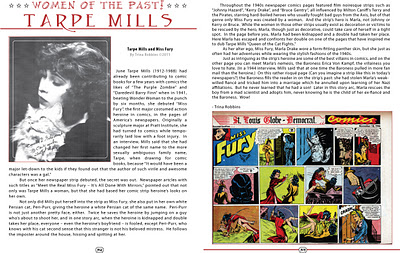 So was Womanthology successful at showcasing the work of its artists? Abundantly. The theme of the book is heroism, and the stories run the gambit from quick vignettes of children struggling with bullying, teenagers discovering their super powers, original fairy tales in the classic style, true stories of women in history, some stories that combine more than one of these motifs and some stories that have none of them at all. Sometimes you can’t even tell who the amateur is, writer or artist. Sometimes… you can. Sometimes, understandably considering the space, stories felt a little too short, a little two truncated. But if you’ve ever worshipped a hero, wanted a hero, or wanted to be a hero, there’s a story (or two or three or more) in here that will touch you, and a ton of eye pleasing art as well. 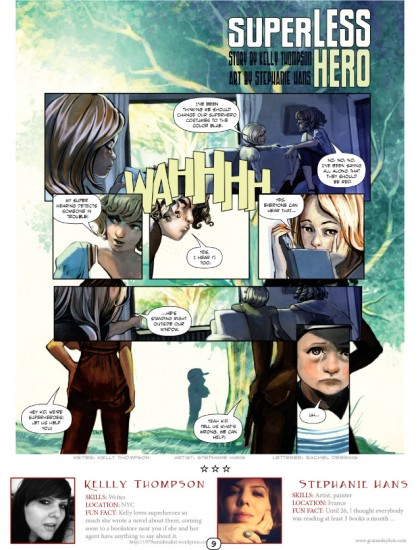 And while great art and stories are one thing, I was personally touched and excited by a lot of the professional creator interviews. Barbara Kesel explains the basic rules of how to put together a comic script for your artist, if you’re a writer. Ming Doyle gives a basic guide to digital inking, while Barbara Kaalberg explains how to do it by hand. Nei Ruffino and Rachel Deering talk coloring and lettering, while Fiona Staples, Jessica Hickman and more pitch in with their own guides to the various and sundry aspects of getting a comic presentable. 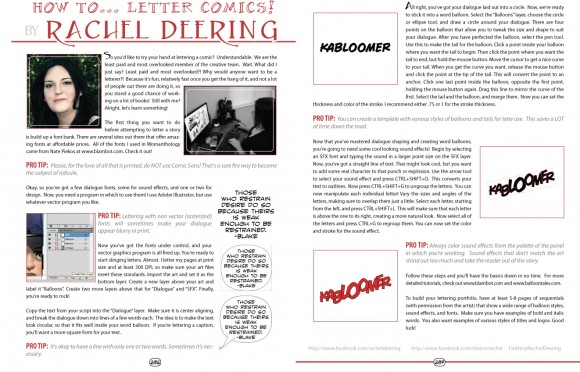 However, the best part of the sections written by professional creators themselves, was, at least to me, a series of interviews with the likes of Nicola Scott, Wendy Pini, and even Devin Grayson (one of my favorite Batman writers and the only woman to ever be the writer on an ongoing Batman title) about the course of their careers. The overwhelming takeaway I got from them was that there are many, many ways to get into the comics industry, and no way is wrong. Quite the inspirational theme for aspiring artists! (Speaking of inspiring artists, the section in the back full of very young girls’ artistic and writerly ideas of what heroism is was pretty darn adorable.) Of course, these interviews were immediately followed in the book by profiles of women comics writers of the past, most of whom even I’d never heard of before.

So if, like us, you’ve been waiting since last August for your copy of Womanthology, go grab one today from Amazon or your local comic store! And if you’re on the fence, know that you’ll be purchasing a book full of beautiful, funny, and exciting stories, giving money to a worthy charity, and making a firm statement that women love comics, make comics, and read comics.

(This review was based on a .PDF copy of the book, so I’ve got no idea what the binding or pages are actually like, if you’re the sort of reader who’s interested in that sort of thing. I look forward to finding out as soon as my hard copy arrives from Amazon!)