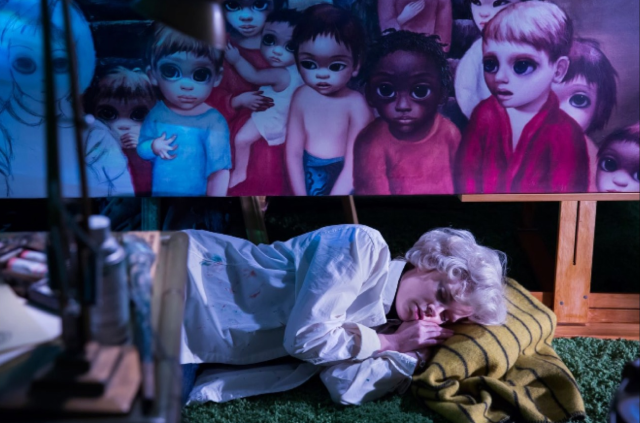 This awards season has been filled with biopics of all kinds, but none are more timely or thought-provoking than Tim Burton’s latest film, Big Eyes. It is also one of the best pieces of feminist filmmaking within the studio system in some time.

Not only does it share the story of a woman who suffered under the restrictions placed on post-war sexist America; but gives us a personal, true-life story which will resonate with women of all ages and gives an understanding of how feminism became a movement in the 1970s. It’s also a damn fine film which is as entertaining and emotionally resonate as is it enlightening. This is the type of gutsy filmmaking we want to see from biopics.

It isn’t very surprising that Burton’s last biopic, Ed Wood, would lay the groundwork for the unconventional biopic. In fact, there are noticeable similarities between Big Eyes, Ed Wood, Big Fish, and Edward Scissorhands. All four star misfit story-tellers who exist in the world of impossible nostalgia created by Hollywood. The difference here is the storytelling misfits in Big Eyes are actually two people in a marriage, Walter and Margaret Keane. And wisely, Burton never forgets it was their mutual decision to lie to the public which assured their destruction as a couple and caused them the personal problems they experienced, while at the same time they were making millions by defrauding the art world.

Margaret, played by Amy Adams, leaves her first husband with her daughter (played by Delaney Raye as a younger child and Madeleine Arthur as a teen) at the beginning of the film, blissfully without giving details as to why. A reminder that this is the 1950s, when divorce was frowned upon and single mothers had to live in the world with a scarlet letter. It is therefore no wonder that Margaret would be charmed by a man, Walter (Christoph Waltz), who very quickly shows interest in becoming a father and husband. As Margaret tells her bohemian best friend, played by Krysten Ritter, “I am a divorcee with a child, Walter is a blessing.” You can sense the lack of self-confidence and self-worth with just that statement.

And the two appear to have similarities which make them the perfect couple –  living the life of two painters in North Beach, he painting landscapes of Paris streets, and she drawing her unusual pictures of children with big, sad eyes. The common interest would seemingly make them ideally suited to a marriage, until Walter begins showing his paintings on the walls of a jazz club and he realizes his wife’s paintings touch the soul of paying customers, who ignore his street scenes. With both using the signature of Keane, he simply begins letting people believe he is the artist, then selling them, and ultimately promoting himself as the artist of the “Big Eyes.”

But to continue selling, Margaret not only has to continue painting the same types of paintings over and over again, but to relinquish all authorship of the works. It isn’t the financial loss or fame which slowly drives her to depression and anxiety, but the complete loss of identity and life of secrecy she is forced to lead, keeping even her friends and daughter in the dark.

The relationship between Margaret and her daughter Jane provide some of the most evocative scenes in the movie, as their relationship is strained by Margaret’s secret double life. And the shame and embarrassment Jane has upon discovering the years of deceit her mother has engaged in is a emotional scene to witness. You can literally see the seeds of feminism being planted in a little girl like Jane as she witnesses her mother being suffocated by a domineering man who forces her into the shadows, and society which tells women to follow their husband’s lead, even if his inclination is to lie and deceive.

One of the undeniable strengths of the movie is the ambiguity which exists regarding the Keane’s deceit and shared responsibility in perpetrating the lie. Margaret is a victim of her husband, who comes to treat her as a prisoner of the lie, threatening and flying into drunken rages when he thinks she is close to breaking the silence. But Margaret also allowed herself to tell and retell the lie, rather than stopping her husband the first moment she has the opportunity.

Margaret even participates in interviews with her husband, telling the press “yes, he painted them” and signing other paintings she does as MGH Keane’s, furthering the lie that Keane means Walter. And Burton and screenwriters Scott Alexander and Larry Karaszewski (a re-teaming of the men behind Ed Wood) never let Margaret completely off the hook. What they give her is the burden of guilt, compassionate understanding of women’s life in that time period, and the opportunity for redemption when she is finally allowed to tell the truth. 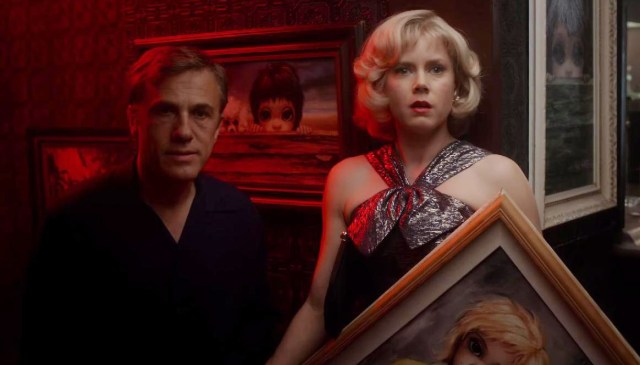 While the story is far more Margaret’s than Walter’s, Burton, Alexander, and Karaszewski show Walter to be far from a cartoonish monster. Waltz plays Keane as charming, intelligent, and very much a man of his time. At times he seems oblivious that he is even doing anything wrong, convincing us he believes what he tells Margaret. Is he a good man of questionable morals or was he always nothing more than a salesman? No one, not even Margaret, knows for sure. And there is also sympathy for Walter from the writers, who show understanding for a man who is jealous of his own wife for his own inadequacies and lack of inspiration as an artist.

The questionable claim the film does make about Walter Keane’s legacy is how much talent he had as a painter of any kind, but for the most part, Keane is a living, breathing, deeply flawed man, even when acting the fool (as he does to Waltz’s comic best in a court scene). Ritter as DeeAnn is perfectly suited to play Margaret’s doubting best friend. It was a delight to see Terence Stamp playing the critic John Canaday (at his grumpy, snobbish best), and Danny Huston is a standout as reporter Dick Nolan, who documents the story of the Keane family for decades, and narrated the film with his signature, rich voice.

James Saito (Eli Stone) plays one of my favorite characters in the film, as the judge who must sort out this messy case of fraud and deception. Only Jason Schwartzman is underused, but he gets a few cheeky moments of his quintessential pretentious asshole caricature. But Adams and Waltz are the stand outs, each proving why they are two of the best around. Waltz, with two Oscars two his name already, certainly deserves best actor consideration for making Walter Keane a real, breathing person, despite what could have easily been a ridiculous character. He gets laughs for his larger than life performance, but you also get the sense that he could absolutely exist, particularly in the art world.

Adams is simply extraordinary as Margaret. Soft spoken with a southern accent and big blonde hair, she makes Margaret a brilliant combination of spirited, independent and sadly, damaged. She is the face of women forced to give up their identities in post-war America to men as head of the household. And as a painter, Adams is entirely convincing as a woman who expresses herself quietly, creating these big-eyed waif children as versions of her own fractured psyche. She is forced to be quietly expressive as she squares off against Waltz, bringing the audience in with her own expressive big eyes, and she does so with the same unexpected charm and warmth which made her an Oscar favorite in Junebug and American Hustle. I just hope we see her sneak into the competitive Oscar race this year, as I have no problem calling her best actress of the year for Big Eyes.

If you’ve ever looked at the original art Tim Burton did of his creature Edward Scissorhands, you will completely understand what makes a man like Burton identify so strongly with the story of a woman like Margaret Keane. In the same decade Margaret Keane expressed her state of mind through the images of children, a teenage Burton saw himself as a misfit with dangerous scissors who can’t be touched. Misfits like Burton, and others who didn’t fit into the technicolor 50s and 60s have a special connection to the overshadowed women of that time who lost their sense of self when under the control of their husbands. Even the look of Margaret has similarities to Dianne Wiest’s character in Scissorhands. I have no doubt Burton has a connection to Keane, and women like Keane, and that personal connection resonates throughout the film from start to finish.

The nightmarish version of suburban California Burton created in Scissorhands feels just down the street from Keane, who lives in her own technicolor, pop-art hell of her own creation. The 50s, 60s, and 70s pop art world of San Francisco also makes for an ideal setting for Burton to reframe his own work as an artist, which has been put under its own microscope. Starting the film with a quote by Andy Warhol, that Keane’s paintings “has to be good. If it were bad, so many people wouldn’t like it,” could be the exact quote applied to Burton’s most recent work.

With movies such as Alice in Wonderland, Dark Shadows, and Frankenweenie making money, while more mature works like Sweeney Todd and Big Fish barely found audiences. Was he making those pop films to appease audiences and make money, or are those actually more personal works…a personal connection we in the audience do see.

In the film, Stamp’s critic called Walter Keane’s work popular kitsch but not art, while Schwartzman, the curator of good taste gallery owner, looks on in disgust at moneymaking Keane. But the film leaves open the question, why were the “Big Eye” pictures so successful? Was is it nothing more than trend or the cult of personality Keane created when he went on talk-shows and did countless publicity interviews. Or did the paintings truly touch people on a personal level. The film, while saying nothing definitive, suggests it may have been a case of both. Some did consume to participate in the trend, but others saw the paintings and were engaged with the image put on screen. I was surprised myself how captivating and evocative the “Big Eye” paintings are when you simply look at them, once you drop your cynicism and give into the emotions.

Big Eyes is that kind of film. It doesn’t have the prestige or polish of other award season films, but what it has in spades is a lot of heart and passion, along with all the skill of masterful filmmaking. And the energy and love which can be seen and felt on screen makes it a blissfully rich cinematic experience for this holiday season. Yes, this is a crowd-pleaser of a movie, but it avoids playing down to audiences, while still being an inspirational triumph about a woman who lost herself in a marriage at a time when two becoming one, really meant the one they became was him.

Lesley Coffin is a New York transplant from the midwest. She is the New York-based writer/podcast editor for Filmoria and film contributor at The Interrobang. When not doing that, she’s writing books on classic Hollywood, including Lew Ayres: Hollywood’s Conscientious Objector and her new book Hitchcock’s Stars: Alfred Hitchcock and the Hollywood Studio System. Are you following The Mary Sue on Twitter, Facebook, Tumblr, Pinterest, & Google +?