Review: The Dark Horse Comes out Ahead of Sports Movie Clichés 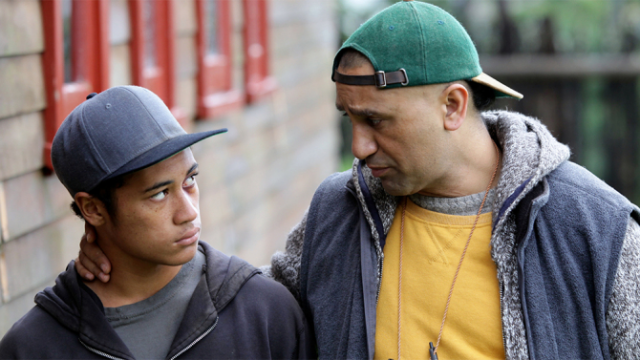 Around this time each year, it seems we get a Disney sports film about the underdog and misfit coach. Last Febuary, we got McFarland USA, and 2 years before that, we got Million Dollar Arm. This year, Disney bypassed the feel-good sports movie, and luckily for U.S. audiences, we got a smaller but better version with The Dark Horse. It’s worth noting that there are two “sports” movies coming out in limited release, about a month apart, with the words “Dark Horse” in the title.

This isn’t the documentary about a race horse (Dark Horse); this is a true story narrative about a youth chess team. Yes, if you are a Fear the Walking Dead fan, that is star Cliff Curtis in the lead role … and he’s pretty much awesome here, too. In fact, despite his long list of excellent performances, the often underused but wonderful character actor probably hasn’t been this good, or given so much to play, since Whale Rider.

On its surface, The Dark Horse plays out like a lot of those underdog sports movies we know. An unlikely coach finds his underdog team and leads them to a victory in the face of adversity. As tired as those clichés might seem, here they might actually be in service of The Dark Horse. The clichés of the genre provide a structure and framing method for a movie that could just as easily fall into the bio-pic clichés. Using the sports film themes allows it to address why this specific story is significantly different from most sports films, why the story is significant, and more importantly, why stories like these should be told the way New Zealander James Napier Robertson chooses to tell it: magnifying the characters’ struggles with the economic hardships, gang violence, and mental illness surrounding them, without white washing the elements which make the characters underdogs.

Curtis plays Genesis Potini, a speed chess champion (no idea there was such a thing, but it seems pretty cool) who was diagnosed as bipolar in the 1980s (before a strong understanding of medications and therapy), causing him to struggle to simply remain out of mental hospitals. His brother Ariki, played by newcomer Wayne Hapi (an artist/craftsman in his own life), is frustrated to suddenly be placed in the position of caregiver. Ariki is the leader of a local gang, which is about to initiate his own son, Mana (James Rolleston), who already realizes that isn’t the life he wants and knows that, once in, it’s near impossible to escape. He’d rather learn the game of chess, under the guidance of the uncle he barely knows, who has started coaching a local team. The “team” is actually just an after school activity offered by Genesis’s friends in their garage, hoping to keep neighborhood kids away from the street violence, but Genesis wants to take them to at least one competition.

The set-up of the film is relatively simple on the surface, but all that allows Robertson (making his debut as a filmmaker) to focus on the less conventional aspects of the film and his characters. For one, turning chess into a cinematic game isn’t the easiest thing to accomplish, but what Robertson manages to accomplish is to both show why the game can be exciting and still explain some of the basics in an interesting way. Of course, because it’s a sports movie, there are couple of fun montages (because you’ve gotta have a sports montage), and like the best sports films, its finds the perfect metaphor between the game and the player without becoming too cheesy, sentimental, or forced. When a former gang banger is compared to the royal characters on a chess board, the emotional impact feels completely earned.

Robertson also knows that sweet-spot for making “family-friendly films,” an art Hollywood seems to have lost. The movie would probably be a bit hard for little kids (occasionally featuring gang violence), but teenagers should be fine seeing this kind of film, which deals with real-world issues and manages to offer inspiration. The subject matter is heavy and often hard to watch but also has the potential to open up some larger, and important, dialogue.

Part of the reason the movie is so strong is the fact that the best scenes are those intimate conversations between Curtis and Rolleston. Their skittish connection to one another—each seems constantly on the verge of either hugging or running away from the other—is powerful and relatable, especially considering the trauma both have experienced. When the truth about the third point of this family emerges, what Ariki’s paternal plans really are, the impact is heartbreaking and powerful to observe. Curtis is a phenomenal actor in general, but this feels like it should be an important next step for him as a leading man in international screen, and James Rolleston is excellent here, especially when the fragile state of mind he hides from his gang family emerges when around his uncle.

James Rolleston became a bit of a child star in 2012 in New Zealand thanks to Taiki Waititi’s Boy, which seems to be the starting point of New Zealand’s growing wave of successful New Zealand films, which focus on their culture and country (rather than simply using New Zealand natural beauty as a massive studio lot for Hollywood films). In fact, New Zealand is excelling with its multi-cultural coming of age stories, and like Boy, The Dark Horse is a cinematic treasure worth seeking out.