Review: Mirror #6 Is an Absolutely Gorgeous Story You Need in Your Life 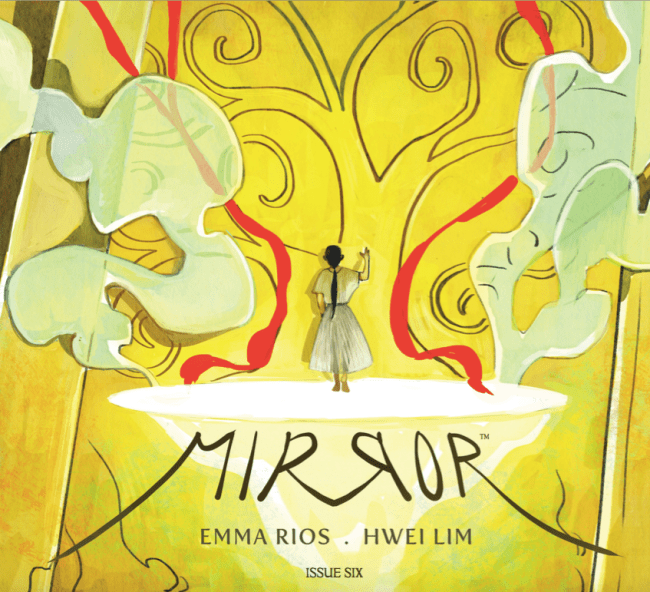 One of my favorite books in the last year, Mirror, by Emma Ríos and Hwei Lim, is at its core about connections—to one another, to our own identities, to the places and experiences that forge who we are. Ríos and Lim weave the intimacy of connection through a shimmering epic of magic and struggle, imbuing their fantastical characters and ethereal world with a sense of corporeality. Like looking into a mirror, I see something I recognize in this beautiful book that has brought me back to read and re-read the first arc of the series, “The Mountain,” many times. After a six-month hiatus, Mirror returns with its sixth issue, taking us back in time 50 years from the dramatic events of “The Mountain.”

The story in this prequel arc has all the enchantment and coming-of-age urgency of a Ghibli film. The young protagonist, Ninua, is the eager apprentice of a preeminent sculptress. When the two artists are summoned by temple Elders to a nebulous place known as “the span,” Ninua discovers just how essential her creative gifts are to the very nature of being. A profound mystery is revealed, with Ninua poised at its axis. 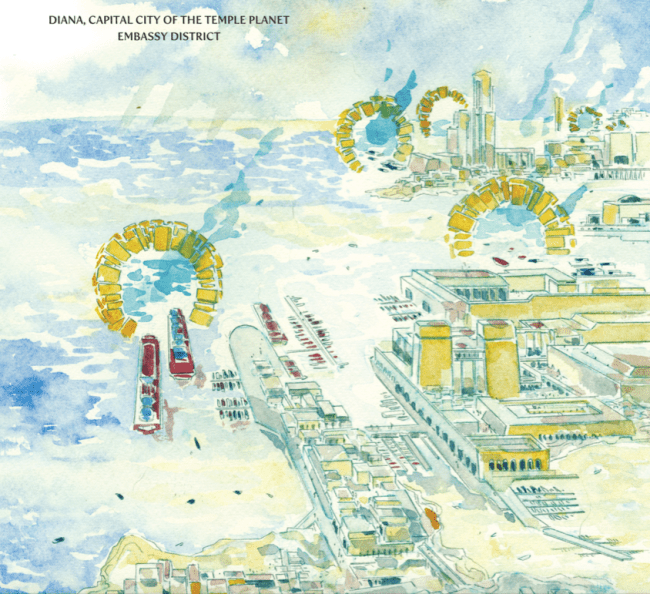 Mirror is an art-lover’s dream. Each component is meticulously crafted to infuse its narrative beats with layers of sensuality and meaning. The predominantly blue and yellow palette, along with a lighter-than-air feel created by judicious use of negative space, create views we might have seen from Matisse, had he visited Synchronia instead of Collioure. You can almost feel the warm coastal breezes of the Temple Planet’s capital city, Diana, or the coolness of the ineffable ether that pervades the span. 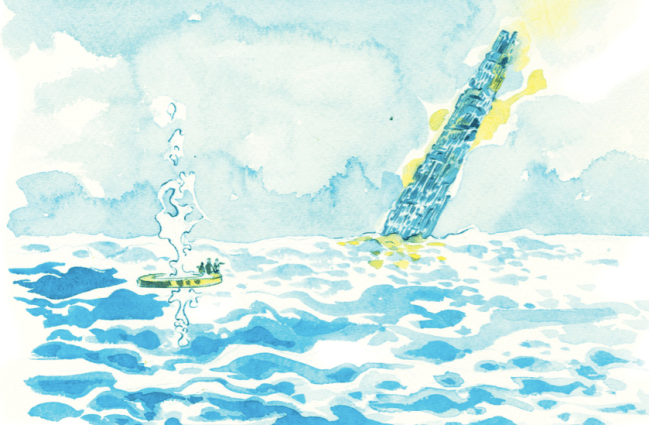 The span is accessed through a temple called “The Ziggurat.” A ziggurat is, of course, an ancient Mesopotamian temple structure. And although Lim depicts The Ziggurat as a tower rather than a raised plateau, she references a few pieces of real Mesopotamian sculpture for the Ziggurat’s interior. Archers in sharp profile hail to the lion hunt relief sculptures from Ashurbanipal’s palace of Nineveh, underscoring the association of the fictional place to the historical time. Implying an interconnected visual history is also a subtle way to insert Mirror into the timeline of humanity, strengthening its ties to the reader. 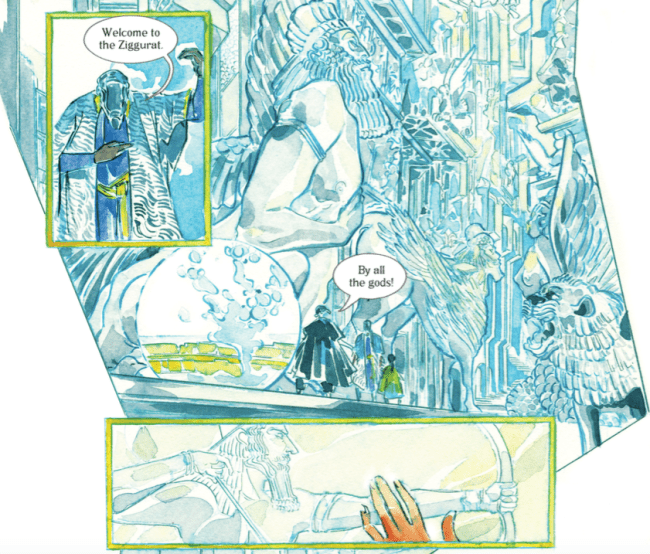 Another Mesopotamian art reference in The Ziggurat is the Assyrian human/animal hybrid protection deity known as the Lamassu. These figures not only link The Ziggurat to extant artworks (you can visit Lamassu at The Louvre, The British Museum, or The Metropolitan Museum of Art), but circles back to the sentient animal hybrid guardian deities of “The Mountain.” Using art historical references, therefore, is not merely copying but a purposeful visual shorthand. Ríos and Lim use shared visual language to describe the multitude of connections woven through Mirror in just a few images.

Composition is likewise laden with meaning in this book. A panel in which Ninua wears a mirrored helmet drives home her connection to the ether when she gazes at The Ziggurat for the first time and we see it reflected in her visor. It’s a small panel but densely packed with metaphorical significance by the way Lim frames the image. We look into the mirrored surface of Ninua’s helmet and see not ourselves, but The Ziggurat. It raises the stakes significantly to suggest that the reader might somehow identify with The Ziggurat, and I can’t help but read into that artistic choice, considering how thoughtfully Mirror is put together.

The composition continually demonstrates how completely the ether permeates Ninua when she is working in the span. Lim allows Ninua’s figure to be absorbed into the undulating flow of the shapes and colors that define the ether, almost taking her out of the story and into the reader’s headspace by abstracting the layout and foregoing traditional graphic components of borders or panels. It’s an understated way of blurring the fourth wall, further drawing the reader into the story.

Like the world where Ninua lives, Mirror itself can be a permeable place, with portals granting the reader opportunities to commune with that which lies beyond the story in the pages of the book. The reader is constantly challenged to look hard at moments that seem at first glance to be merely decorative shapes of water, stone, or air. They aren’t. They hold secrets, hide characters, and reveal connections. Mirror is an intensely rewarding book to read, and this new arc is already proving to be as profound as the first.

Tia Vasiliou is a digital editor at comiXology, and co-host of the weekly podcast The ComiXologist. You can find her being a complete nerd about comics and art history on Twitter @PortraitofMmeX.