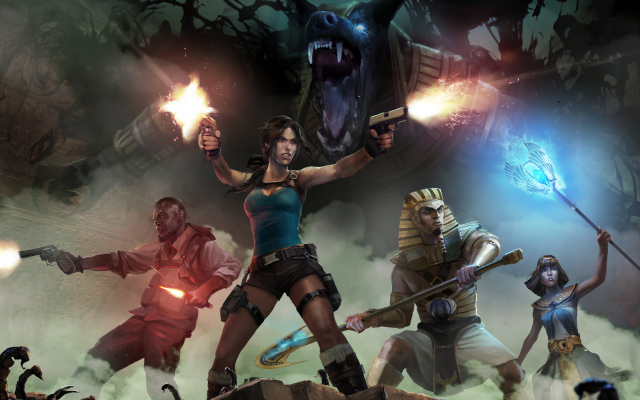 It’s good to see Lara Croft raiding classic tombs again. After last year’s Tomb Raider reboot focused so heavily on combating islanders, I longed for another adventure where she’d rattle off facts about mythological gods and beasts, get a witty jab in at her archaeological rivals, and execute a perfect somersault—all before finishing her sentence. In Lara Croft and the Temple of Osiris, she does it without breaking a sweat. As it should be.

Temple of Osiris (I played the PlayStation 4 version) is a much-welcomed sequel to the 2010 game Lara Croft and the Guardian of Light. Those four (four!) years ago, Lara entered tombs as though for the first time, and it was hard not to feel giddy from all the energy. She sported the same ponytail, dual pistols, and spirited attitude as she always has, but the sights looked new: We jumped, dived, and rolled from a top-down/isometric perspective. Tomb Raider was now an arcade-style action-shooter—and a co-op one at that. 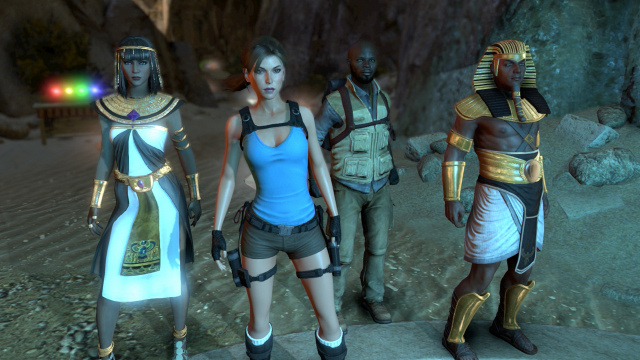 While I’m more than happy to venture anew with Lara into tombs just begging to be explored, those four years apart haven’t done Temple of Osiris much good. This time, Lara and fellow treasure hunter Carter Bell plumb the deserts of Egypt. When they find the fabled Staff of Osiris, they inadvertently unleash the angry god Set and awaken Isis and her son Horus. Cursed, Lara and Carter must work together with the anachronistic duo to revive Isis’s hubby Osiris, who can lift the spell and stop Set from regaining full power. You get the gist of the story in a quick minute of cutscene—almost too fast to digest, but at least the comic book animation is nice.

Accomplishing this goal involves collecting various body parts of Osiris, from head to squishy internal organs, and gathering them at a hub on the map. To keep the Egyptian backdrops from looking too alike, the quest has you delving into tombs with wildly different atmospheres (including one rife with blinking, searching eyeballs and noxious green gases that I was particularly fond of), and Set unleashes all manner of elements upon you. Rain changes to snow and ice, and day changes to night, all in an attempt to stall you. 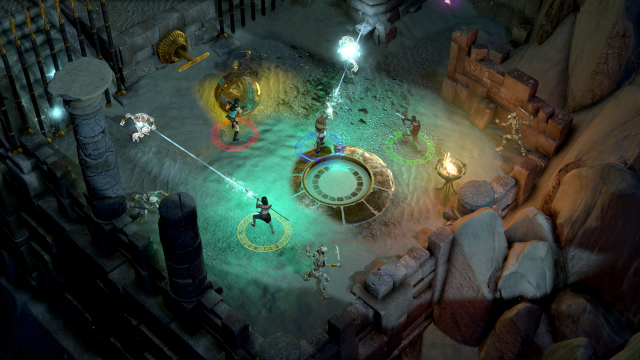 Work together and keep the ball rolling. Sorry, bad joke.

At your disposal is the Staff of Osiris, which can activate anything bearing the mark of Osiris. These are usually platforms you can raise, giant gears you can turn, or time-sensitive bombs whose ticking you can slow to a crawl. When playing solo as Lara, you manipulate the Staff yourself, switching over from your arsenal of guns to release a targeted laser beam of godly power. But in co-op, the second player takes control of the Staff. To survive, you must cooperate. The other player uses the Staff so you both can progress, and meanwhile, only Lara can light fire with her torch or grapple you along walls and gaps. Two other players can join in as Carter and Horus.

Sadly, that’s the extent of Temple of Osiris’s innovations. Aside from the Staff and the superficial weather effects, the gameplay feels identical to Guardian of Light, yet with less of the shiny new gloss that made the former title so exciting. You’re still rolling an awful lot of balls around and sprinting away from huge beasts as they chase you. You do it a little too much. Okay, a lot. Someone build me a robot to rotate this ball for me. 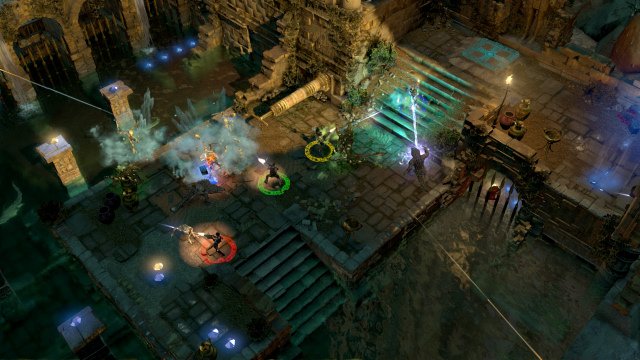 Forget ball-rolling. When everybody gets to blow things up, everybody has fun.

If the game had taken the Staff away from me at any point, I wouldn’t have missed it. Sure, force-controlling objects from afar is nifty, but because Lara can wield it herself without help from Isis, the other characters feel nonessential. They stand around idly at the beginning of a level while you throw yourself head-first into danger. And while Lara was just as independent in Guardian of Light, playing with a partner doesn’t feel as intimate as before: While Totec’s spears could be weapon or a careful means of traversal for Lara, the Staff requires less timing or skill to employ. Playing with a partner and using the Staff is more about convenience than compatibility.

I wish I had more opportunity to get to know Carter, Isis, and Horus than from the empty banter they share. Mostly Carter jokes about Lara’s fondness for treasure while Isis issues hasty commands, and Horus throws in the occasional unmemorable comment. But overall, I’m disappointed in how much Temple of Osiris feels like a retreading of Guardian of Light. It’s still enjoyable, but as a relatively new IP, it has huge potential that’s squandered. Developer Crystal Dynamics neglected to build on what made the first game so fun, preferring a familiar route to risky departures. 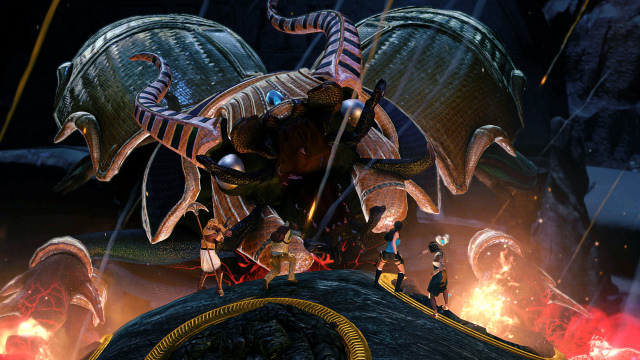 This guy just wants a hug. Nobody understands him.

Not even the new loot system is rewarding: For every twenty treasure chests, I could afford to unlock only a few with the gems I had collected. My inventory became clogged with common rings and amulets, a poor trophy compared to the better rare and uncommon equipment I earned much less often. Gems are plentiful, but they stretch thin.

Most of the developer’s creative juices went to the bosses—humungous scarabs, crocodiles, and other creatures, whom you battle on stages that feel dynamic and active, not like static set pieces. The locales you explore are colorful and moody, a visual treat. But after barreling through my third or fourth chase scene, I began to wish that Crystal Dynamics had been equally as imaginative with finding ways to torture me.

Lara Croft and the Temple of Osiris is available for PlayStation 4, Xbox One, and PC.