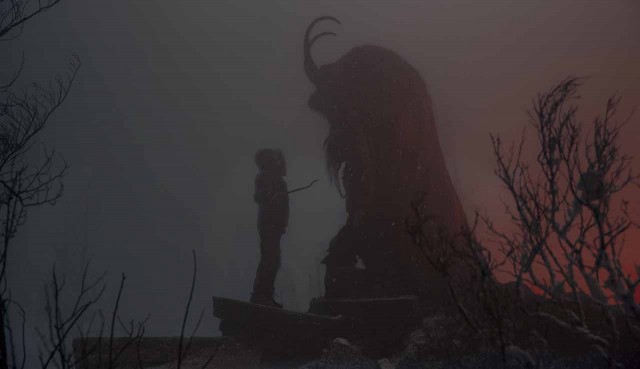 I think I’m reaching my tipping point when it comes to “anti-Christmas” movies. They aren’t even the alternative anymore; they seem to be the majority of Holiday movies we get now. It really shows that we’ve become an overwhelmingly cynical society when you consider how hard it is to even find more than five decent Christmas movies trying (and succeeding) from the past two decades that can get you in a good holiday mood.

Krampus isn’t one, and like most “anti-Christmas” movies, the delight it has in showing its cynicism isn’t nearly as revolutionary or anti-establishment as it thinks it is. The new horror-comedy wants to be subversive about holiday clichés (especially movie clichés), but it never goes far enough. The parody is lacking enough focus, and the satire doesn’t have a deserving target. The movie doesn’t even know who the target audience is. Is this a family adventure movie, an adult black comedy, or teenage horror movie? I still have no idea after watching it.

Krampus is written and directed by Michael Dougherty, the mind behind the horror film Trick’r Treat (another inconsistent one) and writer of X2 and Superman Returns. Krampus is clearly a movie that wants to be in the vein of some other wacky anti-Christmas movies, like Gremlins (or Gremlins 2), Batman Returns, and Rare Exports—dark and ugly looks at humanity during these cheery times, and something I desperately wanted to see more of in Krampus. The family dynamics of sisters Toni Collette and Allison Tolman never seem as dark or dysfunctional as they claim, David Koechner’s Uncle Howard seems modeled after Randy Quaid’s Uncle Eddy but doesn’t make as big an impression, and the disparity between yuppie Adam Scott’s Tom (a weak, not-very-funny Clark Griswald type) and Howard doesn’t result in much comedy. Usually, the attempts at humor either don’t work and just fall flat or feel like the screenwriters (Dougherty, Todd Casey, and Zach Shields) taking cheap shots at lower class people who aren’t deserving of their attacks. Tolman and Koechner’s kids get the worst abuse from the filmmakers.

Comically, the movie works once it becomes more of a horror-comedy invasion film and goes quickly between attempts to horrify and amuse. Like Goosebumps, this is more or less a creature feature, and some of the small things possessed are actually kind of delightful—especially some gingerbread men Joe Dante would have been proud of. Some possessed toys are well-crafted monsters, including a teddy bear, although we also get yet another clown (Poltergeist remake) that doesn’t feel as creepy as it should. (Seriously, I hate clown toys, but this one isn’t scary.) The biggest issue in terms of “horror” is the fact that it has almost no build-up or tension. The number of jump scares, even those that result in laughs, are pretty minimal for a movie about a family under attack.

So, it isn’t very funny and it isn’t that scary, which should be a big problem for a horror-comedy, and I have no idea who this movie is for (honestly, at points, this feels like a ’80s fantasy movie for kids), but it also isn’t a horrible movie. As a creature feature, it’s occasionally kind of a fun adventure, although the adventure part would have been a better hook if making a family movie, and there are some inventive elements to these attacks on the house. The reason why the gingerbread works so well is all because it’s a familiar, sweet and cheery thing turned demonic. If the teddy bear and dolls were introduced as lovable things in this house, their evolution would have worked better. One of the best sequences is telling the story of Krampus with claymation. Culturally, we have such strong connections to claymation as a way of telling Christmas stories that using the same technique to tell a dark story works remarkably well. It’s why something like The Nightmare Before Christmas works. Oddly, more direct references to Christmas clichés from classic movies would have benefited this movie greatly, and so would a focus on this “shadow of St. Nick” premise, which is what Krampus supposedly is—a premise thrown away until the very end.

Almost immediately, I wrote down all the directors this movie is in the vein of: Henry Selick, Ed Burton’s 90s films, Joe Dante’s 80s comedies, Don Coscarelli’s horror films, Sam Raimi’s Evil Dead horror-comedies, and Ron Underwood’s Tremors (especially Tremors). The big problem isn’t that the movie failed to find a story worth telling; it really is the directorial tone of the movie. It’s the fact that this movie lacks ANY sincerity and from the very beginning wants the audience to know, “We know this is silly. Don’t bother buying into the premise or characters or family dynamics.” The films keeps you constantly at a distance, despite the actors’ effort, and that cynicism from the top hurts from the very beginning. A movie, especially a Christmas movie, doesn’t need to be perfect to make an impression, but commitment and effort are key, and that’s what this one clearly lacks. Who knows? A little of that Christmas spirit that it talks about could have saved it from mediocrity.