Adventure Game Moebius: Empire Rising Gets Tangled Up In Itself

I have to be honest. I haven’t finished playing Moebius. I would guess that I have about an hour or two left. As I write this, I don’t think that’s going to change, even though I can’t tell you whether or not I recommend a game that I haven’t played through. There are folks who will dig this game, and more power to you. There is some good stuff in there, and I did enjoy parts of it. But I reached my limit. I didn’t finish it, even though it’s my job to do so.

Well, actually — no. My job is to tell you about my experience in a game. That much I can do.

Six hours of gameplay ago, I could not have imagined bailing out. I had just completed the first two chapters, and I was into it. Everything about this game was my cup of tea. An old school point-and-click written by Jane Jensen, one of the genre’s greats. An over-the-top metaphysical mystery, complete with shadowy government dudes and historical shenanigans (on a scale of one to Sleepy Hollow, it’s somewhere north of middle). A globe-trotting, artifact-analyzing adventure, complete with dossiers and suspect profiles — everything a kid brought up on Carmen Sandiego could love.

The story intrigued me, as did the protagonist. Malachi Rector is not a gumshoe, but an antiques expert, prone to quipping about decorating choices and bad replicas. His brand of acerbic genius will be instantly recognizable to anyone who has watched television in the last ten years, but I found his vocation enticing, and his snarkyness welcome. He was eventually joined by David Walker, a chummy, punny ex-soldier with a fierce protective streak. They fell into a dynamic typically reserved for co-ed duos, complete with an air of will-they-or-won’t-they. It was a refreshing change, though perhaps a little goofy at times. The writing was fun, the voice acting solid. I imagined that for some players, this was going to be slashfic central.

There were some flaws from the get-go, but at first, I was forgiving. Moebius is an indie game, made on a limited budget. I didn’t expect it to have top-shelf graphics. But while the backgrounds were often lovely, the characters were…awkward. Dated, even. The people in Malachi’s world looked as if they had stepped out of a game from ten years ago. But, okay. Like I said, limited budget, small team. A few animation quirks could be overlooked.

My patience on that front began to chip away as I kept playing. The characters’ facial expressions distracted me at times, and Malachi’s tedious movements interrupted the flow of conversations. I was getting weary of watching him mosey around, but again, this wasn’t a significant complaint. Not until my game crashed and I learned there were no auto saves.

In a way, I feel a bit spoiled for assuming there would be. I’ve become so accustomed to games saving automatically that it didn’t occur to me to consider otherwise. But while the absence of auto saves wasn’t the end of the world, the lack of a quick save function did make me raise an eyebrow. Not a big deal, but Malachi’s ambling pace made me reluctant to sit through scenes a second time, and it became clear that the crash was not an isolated incident (I encountered three game-breaking bugs along the way, too). I took one more step back from the story, constantly pausing to make hard saves.

Though these quibbles started to grate at me, it was a puzzle that irrevocably broke the tone. Before I get into it, though, I need to explain how inventory works in Moebius. Unlike most adventure games, which let you grab everything that isn’t nailed down, you can’t pick things up unless Malachi has an express purpose for them. It’s a little aggravating when you see a tube of super glue you know you’re going to need later, but Malachi is a practical, no-nonsense man. In that sense, it fits.

So. The puzzle. At this point in the story, Malachi is in New York, and has two politicians he needs to contact: Senator Markham, a person of interest, and Congresswoman Smythe, who probably knows something about Markham. I decide it makes the most sense to give her a call first. No, Malachi tells me, he wants to meet Markham alone before talking to her. Not the way I would’ve done it, but fair enough. We head over to Bethesda Square, where Markham is fortuitously holding a rally. I spot a VIP tent. An excellent time to give Smythe a call, right? I mean, surely she can get me inside. No, Malachi tells me, we’re not calling her until we see Markham. All right, Malachi. Have it your way. 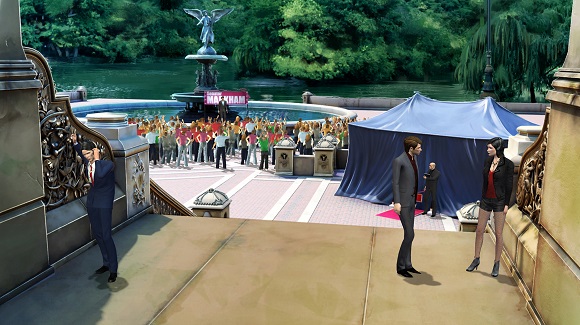 I talk to the guard, who predictably tells me that I am not on the list and don’t have a badge. Now, I’ve played enough games to know “don’t have a badge” translates as “go find a thing.” I direct my attention to two conspicuous NPCs — a man talking on a phone, and a teenage girl. Phone Man has a VIP badge on a lanyard. Malachi says we need a distraction in order to obtain it. Having nothing on me that will assist, I talk to the teenager, who brushes me off. Malachi notes her portable CD player, which he says indicates a lack of money. Aha! I think. The discarded MP3 player in Malachi’s bedroom! Seems like a bit of an out-of-the-way solution, and I’m not clear on what part the girl is supposed to play in all this, but we’re still within the realm of reason.

I head to Malachi’s apartment, get the MP3 player, then go back to the park to enlist my accomplice. It genuinely didn’t occur to me that “create a distraction” meant “go bend over in front of that total stranger” until I was halfway through the conversation, but hey, what’s dignity matter when there’s a last-generation iPod up for grabs? Having successfully coerced a minor, my task was now to get the VIP badge from Phone Man, whose gaze was most definitely not on me. Malachi informed me that I couldn’t pull the badge up over Phone Man’s head, as he’d be bound to notice. Good point, Malachi. Let’s do something that makes sense. Like, say, going back to the apartment for a pair of kitchen scissors. Because surely, Phone Man won’t notice me positioning myself behind him after I stroll conspicuously across the plaza, nor will he hear the scissors snipping near the nape of his neck, nor will he feel the badge as it falls from his person. Nope, he’s too busy communing with an underage ass, which has remained in tableau for the duration of however long it’s taken me to get to Lower Manhattan and back.

But all’s well that ends well, because now I have my badge. I can show it to the guard and — no, no, Malachi tells me. We’ve got to fix the lanyard first. Oh. I can’t tell the guard the lanyard broke? Okay, I suppose it’s time to go to Malachi’s office for that tube of super glue I couldn’t pick up earlier.

Back to the subway, then.

At long last, I approach the VIP tent, badge around my neck. No dice, the guard says. I’m not on the list. Malachi is frustrated. Who does he know with some clout?

Naturally, she was happy to help.

My issue here is not with backtracking and roundabout puzzles. Those are hallmarks of the genre, and I’ve loved many a game that included those things. The problem is that Moebius presents itself as a serious, grown-up drama. I couldn’t see it that way after the badge puzzle. I couldn’t believe that a man too sensible to carry around a tube of super glue that he saw no immediate use for would solve problems so ludicrously. I couldn’t believe that a man so devoted to his smartphone would return to an out-of-town hotel to retrieve a decorative lantern to use as a light source (does he not know there’s an app for that?). I couldn’t believe that a man renowned for his cognitive might would fly from Washington DC to Manhattan in search of a bottle of booze for a woman back in DC, because god knows there are no shops to be found in our nation’s capital. If you want kooky, off-the-wall solutions, put them in a comedic game (Exhibit A: Broken Age). If you want to craft a dark, mature thriller, put every object you need in the immediate area, so as not to break tension, and make them be things that people would actually use (Exhibit B: The Walking Dead). The combination of the two did not work for me. I enjoyed Moebius when it stuck to analyzing people and objects, or puzzles that could be completed in one contained location (the telescope puzzle, for example, or code cracking). If the game had been that way all the way through, I would’ve been on board. But the rest of the time, the gameplay was divorced from the story in a way that left me feeling distanced from both, and the annoyances that had been stacking up from the start became increasingly difficult to ignore.

But I stuck with it. I was still curious as to how the mystery would unravel — right until late in the game, when a second pair of scissors appeared. In this scene, Malachi needs information from a woman who has been less than forthcoming. She’s devious, we know, and the things she’s hiding could save lives. She’s also into Malachi, so he flirts with her, trying to get on her good side. No argument here. They head to her bedroom, like y’do, and…and Malachi threatens to carve up her face with a pair of scissors.

That’s how the story goes, at least. In terms of gameplay, you have options. You can talk to her (which does nothing). You can verbally threaten her (she’ll scream, attracting the attention of security guards — game over). Or you can try to kiss her. She’ll use this opportunity to kill you. Clearly, since she’s out for blood, the only option is to get the jump on her first.

Only, Malachi doesn’t know that. Prior to the kiss, the woman seems sufficiently buttered up and ready to talk. So, either Malachi has decided to jump straight to wrathful violence (something he has never displayed an inclination toward), or his behavior is meant to be justified by the presence of a threat only the player has knowledge of. This is where Moebius lost me. The disconnect bothered me so much that the last bit of interest I had vanished.

I pushed myself to power through anyway. That is, until about an hour later, when the game crashed while I was in the save menu.

I sat there, frustrated and tired, trying to summon the will to redo yet another meandering puzzle. I asked myself a question: Is there likely to be anything in the final hour of this game that will redeem it for you? I thought hard about that. It is entirely possible that the ending was brilliant and mind-blowing, something that would’ve made me come away saying, “Well, at least the story was fun.” But a kickass ending wasn’t going to make me forget about the crashes and bugs, or the slow animation, or the incongruity between puzzles and story. Being able to maybe say those six words just wasn’t enough to keep me going. I’m not sorry for having tried this game. But I’m okay with leaving it be.