Review: IT Chapter Two Is an Ambitious Epic With a Strong Heart

Four out of five red balloons 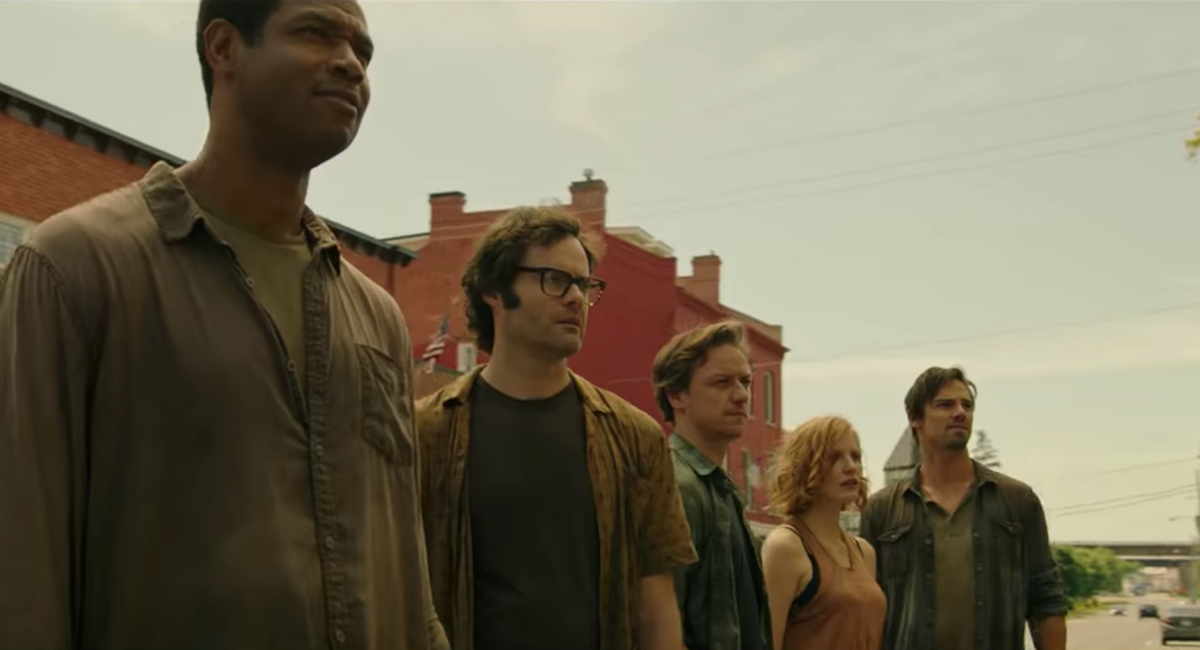 Endings are tricky, and not something Stephen King is famously good at delivering on. This left director Andy Muschietti and screenwriter Gary Dauberman the somewhat difficult task of crafting a massively satisfying ending to an adaptation of King’s IT. The first IT was a pop-culture juggernaut, breaking box office records and earning critical praise, and expectations for the sequel are astronomical. IT Chapter Two mostly meets expectations, delivering an ambitious horror epic about friendship, love, and growth after trauma. Anchored by outstanding performances and with striking visuals, the film is messy in parts and triumphant in others, and delivers a powerful conclusion to the Losers’ story.

The least spoiler-y version of the plot I can give you goes as follows: 27 years after the Losers Club beat Pennywise, the evil clown returns to haunt the town of Derry. Mike (Isaiah Mustafa), the only Loser to remain in town and therefore the only Loser to remember what happened all those years before, must reunite the gang to stop It. Once the Losers return to Derry, they must face their own trauma as well as come into who they were meant to be if they have any hope of stopping It once and for all.

If this sounds a little bit like Avengers: Pennywise Wars, the comparison isn’t that far off, what with the sprawling runtime and the scrappy ensemble of likable oddballs. The comparison also works because much like with Avengers, IT presumes you’re familiar with the characters and doesn’t bother recapping their previous adventure, so make sure you’ve seen the first film before buying your ticket.

You have to be willing to go along for the ride, as the film gets weird, though I mean this in the best and most Stephen King-ian way. Many of the weirder parts of the film are nearly direct translations from the book itself. You have to fully embrace the ambitious nature of the film, even if it doesn’t always give you the payoff you want. King’s novel is strange and cosmic, and Muschietti’s translation of that to a visual language will have detractors as well as fans.

Muschietti is deeply ambitious with the film. As a result, II Chapter Two aims for great heights and usually reaches them, but there are a few scenes that drag in the lengthy runtime. Some of his ideas don’t translate quite as well as they should have either, though overall the film is deeply engaging and rarely did I find my mind wandering during the two hour and 45 minute runtime. The scares are darker and more intense, as are the thematic beats. Usually this pays off well, but other times it falls short.

Of course, the heart of the film and the heart of the novel has always been the Losers, and the more invested in them you are, the more likely you also are to enjoy the film. The cast is uniformly excellent, though I wish they’d given Jay Ryan a little more to do as Ben besides pine. Mustafa, James McAvoy (Bill), and Jessica Chastain (Beverly) deliver strong performances, and I especially loved the warmth that Mustafa brought to the role of Mike. This is a true ensemble film, with each actor getting a chance to shine and each character pulling equal weight in the narrative.

However, the real stand out performances come from Bill Hader as Richie and James Ransone as Eddie. There’s little I can say about Hader that hasn’t already been said by nearly every other critic on the planet: he’s phenomenal. Both hilarious and heartbreaking, Richie gets the best arc in the film, and Hader more than rises to the occasion. If anyone winds up getting major awards love for this film, it will undoubtedly be him.

On the flip side, Ransone delivers a comedic tour de force, and might be the funniest person here. He embodies Eddie’s nervousness and heart perfectly, both in terms of adapting the character from the novel and continuing on the work done by Jack Dylan Grazer in the first movie. His chemistry with Hader is also incredible, which gives their stories even more of an impact. If Richie and Eddie were the fan favorites coming out of the first film, then Chapter Two might catapult them to cult status, and I don’t say that lightly.

I also want to briefly mention Andy Bean as Stan, as well as his younger counterpart Wyatt Oleff. Frequently overlooked, I found their work to be particularly moving in Chapter Two, but that’s all I can really say without diving into spoiler-y territory. Bill Skarsgard is also just as frightening as Pennywise this go-around. Pennywise is angry and vicious, smarting after his loss 27 years before and looking for revenge, and Skarsgard is clearly having more fun than anyone else in the role.

The film also makes a conscious choice to embrace earnestness and the sentimental, especially when it comes to the Losers and their story. There’s a sense of power in the sentimental though, and it comes close to capturing the feel of King’s novel. This is not a story about a monstrous sewer clown, it’s a story about childhood and of coming of age. When the film embraces the bittersweet nature of the narrative, it soars towards an emotional climax that might even bring a tear to viewers’ eyes.

IT Chapter Two aims high. It wants to be so much, and while it mostly succeeds, it also falls flat in certain places. But given the source material, I’d rather Muschietti and Dauberman go for broke on trying to capture the feeling and heart of King’s novel, even when it misses the mark. The end result is a sprawling story with rich themes, and it feels like the novel did when reading it. The book is just as messy as the movie, and while the movie doesn’t fix all the problems, it brings a new interpretation into the light that can stand on its own next to the source material.

Ultimately, the film is an achievement in big-budget horror storytelling, and an excellent adaptation of King’s work. It is weird and messy and ultimately uplifting, with a strong cast and some serious scares. Best viewed with the first film (they are, after all, one cohesive narrative), it’s sure to make money at the box office and cement the series’s place in the horror canon.