The Benedict Cumberbatch Show, for better or worse. 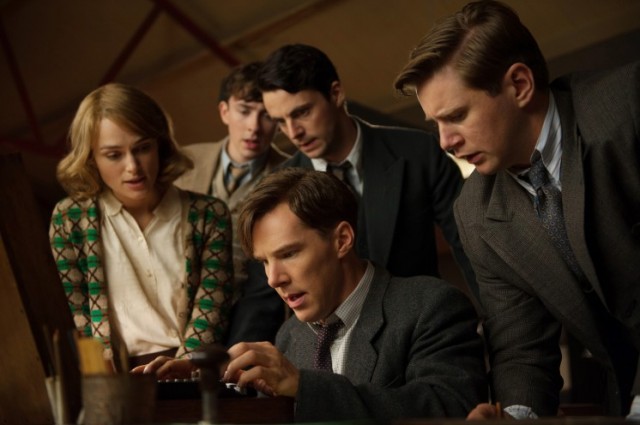 At the beginning of The Imitation Game we are told explicitly that we’re watching a story based on real events. At the end, in case you somehow forgot, they stamp the truth label on the film once again with an epilogue about the legacy of Alan Turing, played in the film by Benedict Cumberbatch. Truth is, if you somehow made it into the theater without knowing this was based on real events (considering the trailers and posters) it would still be abundantly clear that you are watching a true story. The biopic banner covers every inch of this film, ultimately to the point that the film is more concerned with the prestige that comes with the true story/biopic genre than it is with telling a compelling story of Alan Turing’s accomplishments and his tragic downfall.

The story of how the Enigma Code Machine used by the Nazis during World War II was cracked is certainly a fascinating story that frames scientists and mathematicians as heroes of war and pioneers of modern technology – a story which should be told. But in the filmmakers’ attempt to make Turing the real hero of this story, they make his accomplishments less important than his personal problems. To do this, the brilliance Turing contributed to the world, which was lost too soon, is never given the attention it deserves. Likewise, because the filmmakers don’t have a clear understanding of how to convey Turing’s brilliance on screen; they simply make his team of scientists into useless men who are almost seen as morons by director Morten Tyldum and writer Graham Moore, rather than brilliant men in their own right who just don’t see the world in the same way as Turing. Likewise, there is no mention of the Polish machine Turing based his code breaking machine on, or the years of work they contributed, making this English production ring of nationalist misrepresentation.

The film tells essentially three chronological stories cut together about Turing’s life: a childhood story of him discovering his sexuality, the war story, and his arrest for indecency as a homosexual in 1953. The main plot of the story, however, is the war; his troublesome relationship with his team of fellow scientists and mathematicians, tension with his commanding officer, and his one and only friend Jane (Keira Knightley), the sole female member of the team. The arrest is used as primarily a framing device to allow for narration and, ultimately, the tragic ending of Turing’s life. The childhood story, despite being very sweet and sad, doesn’t fit into the rest of the film at all; it’s message would have been better conveyed in a monologue by the adult Turing, explaining how those events informed his adulthood. The way the flashbacks are handled in the film holds the audience at emotional arm’s length, and makes the film seem packed. It’s the one film this year which probably should have been longer than two hours. 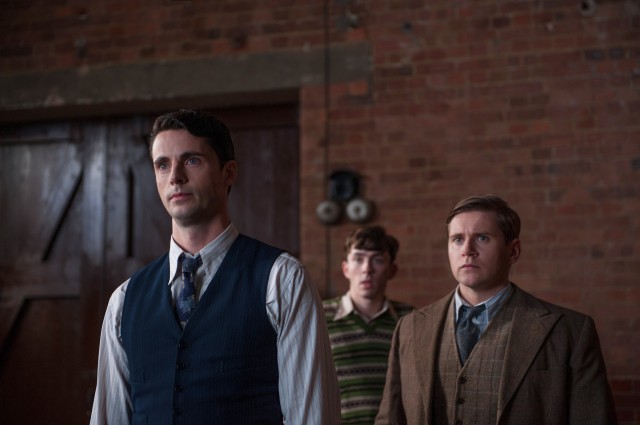 In fact, watching the film, I kept thinking how much better than movie would have been as a mini-series, and how much the film felt much more like a high-quality BBC production. A rich, well-crafted TV production – but not exactly cinematic. The movie is the definition of over-scored, simply having too much music in it to have any impact; especially when Tyldum and composer Alexandre Desplat have music alluding to big moments before they happen. The movie also feels edited for TV, particularly in the out-of-place and out-of-character lines of dialogue seem inserted into the script simply to create trailer moments. The dialogue really is laughably bad at times, to the point that even great actors just can’t save it.

I’m about to make enemies here, but I have to say this about Benedict Cumberbatch’s award-winning performance: I didn’t like the choices he made in this film. I really like Cumberbatch as an actor (especially his voice); his performances in 12 Years a Slave, Hawking and Sherlock are just fantastic, and I couldn’t take my eyes off him in Tinker Tailor Soldier Spy. But Cumberbatch can go overboard with his signature ticks to the point of distraction, something he’s guilty of in The Imitation Game, which ultimately makes the performance seem manufactured. I would have preferred if Cumberbatch had been a bit more restrained in the way he reacted to events in the movie, so that when Turing experiences tragic events in his life (which require a truly big emotional reaction), it would have been noticeably bigger than his behavior throughout the rest of the film. Despite being told over and over again in the film that Turing is reserved and awkward to the point of alienating people, Cumberbatch plays him as a man who is unusually sensitive, as if constantly on the verge of tears. I couldn’t help but feel watching this that another actor would have been a better choice for the role – like Matthew Goode.

Instead, Matthew Good plays Hugh Alexander, a man who in English history was considered equal but different from Turing in terms of intelligence (something left out of the film in order to make him nothing more than a playboy). As an actor, I’ve come to like Matthew Goode a lot, and would have rather seen Cumberbatch and Goode switch roles. The would have let Cumberbatch’s reserved qualities play into Alexander’s charms, while still allowing him to appear a bit more intelligent – a quality Cumberbatch does consistently bring to roles – while letting that weirdness we saw in Stoker from Goode inform Turing. As for his role here, Goode (and all the supporting actors) are fine, but given almost nothing to do except react to Cumberbatch in disgust or awe. The entire supporting cast feels wasted, as they are used simply in service to Cumberbatch, rather than to the story. In fact the only actors given some meat to chew on here Rory Kinnear, as the detective in 1953, and Keira Knightly as Joan Clarke. 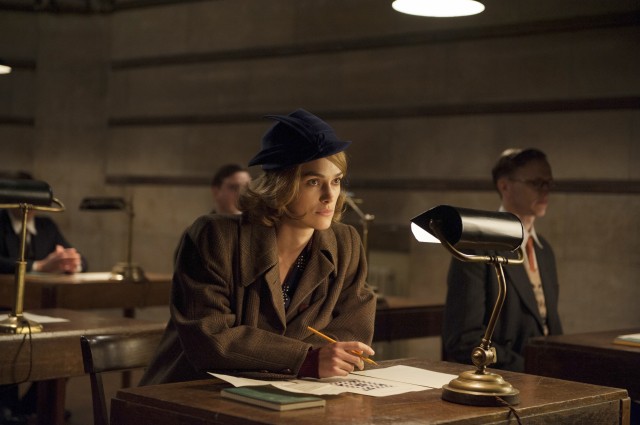 Keira Knightly is an actress who is rather fascinating to me because I almost exclusively like her in period films, while feeling she is often out of place in her own time. But, I do really like here, and that spunky quality which made audiences fall in love with her in Bend it Like Beckham and Pirates of the Caribbean is back on display in The Imitation Game. In fact, I think this might be my favorite performance from Knightly since Pride and Prejudice. It may have been better for the filmmakers to focus on Keira Knightly’s character and her struggles with Turing for at least for a fresh perspective on this story, and to justify the amount of screen time and character development she is given compared to the other members of the team.

And that, really, is what is lacking from this movie: a strong structure. The Imitation Game can’t decide the story it’s telling. Is this a procedural about decoding the Enigma? Or is it a character study about the man who happened to do this? Is the film a tragedy about being arrested for indecency because homosexuals were treated so abhorrently? Or because this specific man of brilliance was treated that way? Is he the story, or the case study? For the first half of the film, the movie feels very much like a procedural, until halfway through the focus abruptly shifts to being about his sexuality. The shift in perspective doesn’t work because the screenplay hasn’t weaved in anything about Turing’s sexuality earlier in the film. 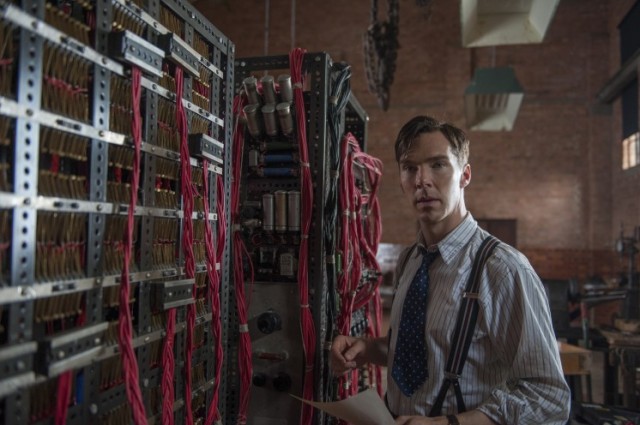 In fact, the way in which Turing’s sexuality is portrayed in the film is problematic. I agree with the filmmakers that showing an explicit sex scene was not necessary in conveying his sexuality, but we never see any indication that Turing has a sexual or romantic life in any way. Apparently the script originally whitewashed Turing’s sexuality, suggesting a romance with Joan. Thankfully, that’s been removed; but in its absence, Cumberbatch plays turing as though he is asexual. Because we see nothing of Turing’s life between his government service and his arrest, we don’t know how this arrest and punishment really affected him. Was this a case of the last nail in the coffin of an already troubled life? Or was he at the very top when he was brought down by the authorities?

The Imitation Game won the Audience Award at the Toronto International Film Festival this year, and I have no doubt it will receive many Oscar Nominations. While I don’t hate this movie, the flaws strike me as so large it feels like a case of the Emperor’s New Clothing. The movie feels calculated to win awards, rather than to be a story to which the filmmakers have a personal connection. In this movie about mathematicians, The Imitation Game is the definition of by-the-numbers Oscar bait.