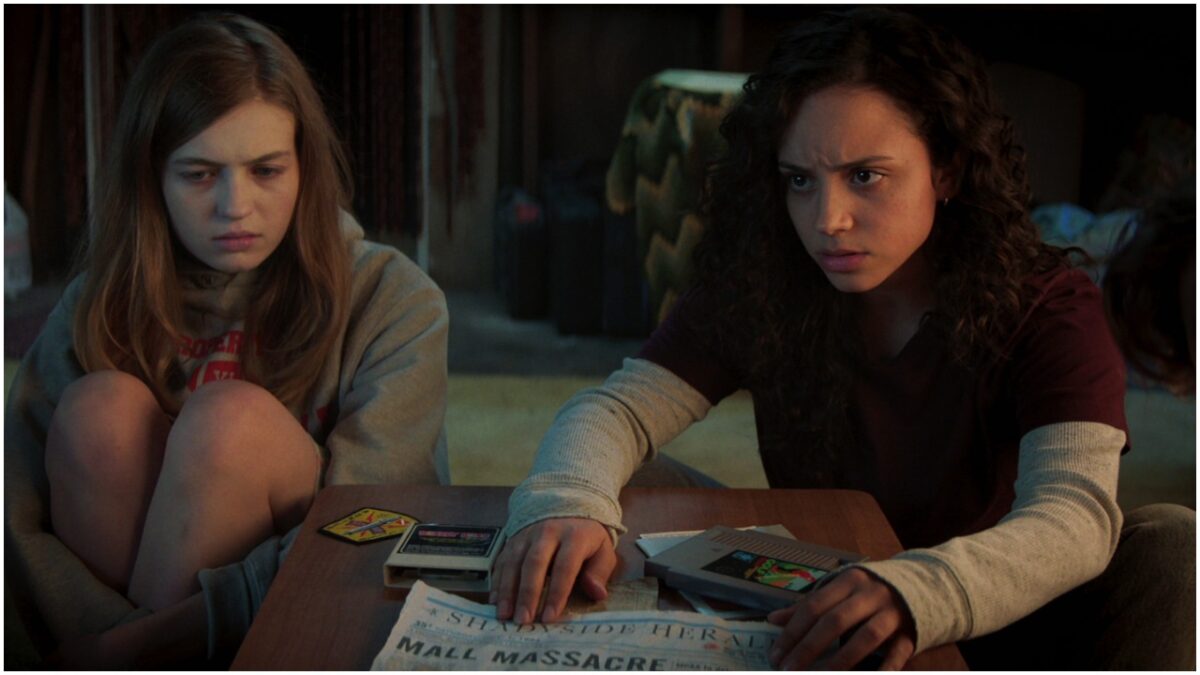 Netflix takes us back to the 1990s with Fear Street Part One: 1994, the first film in a horror trilogy event that will see 3 movies drop over the course of 3 weeks. The trilogy, based on R.L. Stine’s teen horror series, is directed and co-written by Leigh Janiak (Honeymoon, Scream: The TV Series).

The films chronicle the bloody history of Shadyside, a small town with a legacy of gruesome murders that has earned it the moniker “Killer Capital, USA”. Fear Street proudly wears its time capsule credentials on its sleeve, opening with a scene in a B. Dalton bookstore at the local mall. A bored teen employee (Maya Hawke) reads the latest R.L. Stine novel, which a haughty customer dismisses as “lowbrow horror” and “trash.” Said teen is promptly murdered in a neon-lit chase through the mall by a skull mask wearing killer, kicking off a film clearly meant to be a paean to ’90s slasher movies, and to the decade itself.

The story centers on Deena (Kiana Madeira) a surly band goth who is heartbroken after her girlfriend Sam (Olivia Welch) moved to the wealthy rival town of Sunnyvale. Much like Pawnee and Eagleton, the two towns have locked horns for years, with the poorer cursed Shadyside continually in the shadow of its preppy, less murder-riddled neighbor. It seems that everyone wants to escape Shadyside, including Deena’s friends Katie (Julia Rehwald), an ambitious cheerleader who sells pills on the side, and Simon (Fred Hechinger), a laid-back bro who gamely tosses movie references into conversation as the gang’s night devolves into a slasher film. Joining them is Deena’s shy nerdy brother Josh (Benjamin Flores Jr.), who spends his time in AOL chatrooms theorizing about his town’s bloody history.

Josh speculates that the town’s run of violently bad luck can be traced back to 1666, when Sarah Fier (pronounced like “fear”) was burned at the stake for witchcraft. Fier cursed the town, and the ensuing centuries saw all manor of horror tropes besiege Shadyside, including an axe-wielding killer (who we’ll spend more time with in Part Two: 1978), a razor blade carrying teen queen, a murderous milkman, deformed killer children, and more.

The slasher genre has been copied, deconstructed, and parodied over the years, from Scream to Scary Movie to American Horror Story. You might wonder if there’s anything new to say about the genre, which the film ably addresses by stacking the cast with people of color and centering the narrative on a queer love story. But outside of those updates, the film feels rote, shuffling through horror tropes like a mindless killer, with no humor, camp, or commentary to be had.

Pointing out horror movie references within a horror movie was fun and transgressive when Jamie Kennedy’s Randy Meeks did it in the Scream series. 25 years later, it feels like a Xerox of a Xerox. The film isn’t helped by thinly drawn characters and relationships, brought to life by a less than enthusiastic cast.

The needle drops deliver a bevvy of beloved ’90s tunes, and every costume choice and AOL chat room reference reminds the viewers what decade the series is set in. As a ’90s nostalgia lover, I enjoyed every reference immensely. But aside from the musical callbacks and a handful of creative kills, Fear Street doesn’t have much to say for itself. We’ll see what the next two installments have in store, as Part 2: 1978 will revisit the summer camp slasher genre and Part 3: 1666 will presumably bring Sarah Fier to life.

Fear Street Part One: 1994 is currently streaming on Netflix.