Review: Marguerite Bennett Makes You Rethink All Your Life Choices In Animosity Vol. 1: The Wake 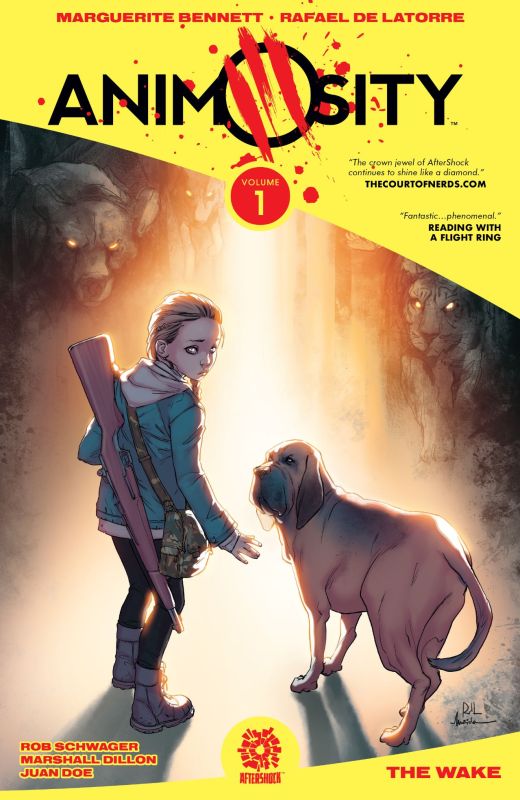 Animosity is the story of a girl and her dog. But OH MY GOD, is it so much more than that. You are doing yourself a huge disservice if you aren’t reading Animosity. Luckily, the first trade has just been released. Do yourself a favor and pick up Animosity Vol. 1: The Wake, won’t you? Oh. You want to actually know what it’s about and what the big deal is before you do that? Don’t trust me when I tell you something is life-changing? Well, read on then!

The world is plunged into chaos as the newly-intelligent Animals fight humanity, and simply fight each other, for their own life, liberty, and pursuit of happiness. In the midst of the turmoil is Jesse, an 11-year-old girl, and her dog, Sandor, who is devoted to her and her protection. One year after the incident, Jesse and Sandor begin a cross-country journey to find Jesse’s half-brother, Adam, who is living in San Francisco.

Don’t miss out on this fantastic first collection of the series EVERYONE is talking about!

Bennett digs her claws into you and pulls you into this book from the very first page in her Introduction, a heartbreaking and plain-spoken meditation on the pain of awakening from the cocoon of childhood to realize all the sacrifices your parents made for you, only to one day possibly follow in their footsteps and have to sacrifice for a child only to let them go. The way she puts it is a gut-punch, and it lures you into Animosity wondering what it has to do with a story about newly-intelligent animals.

The introduction, however, is nothing compared to the way the first few pages of the first issue take hold of you. It’s not every story that starts with a rat attack. It’s not every story that follows that up with animals coming to consciousness mid-instinct-fueled action (or just before being slaughtered in a slaughter house). There are some gut-wrenching images (it’s actually less the images, which are not as graphic as they could be, and more the ideas the images evoke) in the first few pages, but all of them are eased upon meeting Jesse and Sandor, a little girl and her loving dog, who’s suddenly achieved enough consciousness and language to be able to tell her that he loves her himself.

The rest of the four issues collected in this trade plunge you into a world that will make you rethink your ideas about ethics and morality. Would your opinion of eating meat change in a world where animals can express their thoughts and feelings verbally, for example? (After all, you’d now be taking fully-sentient life. On the other hand, not all animals are nice or reasonable…could we just eat the ones who are basically serial killers?) How do you make amends for something (like animal subjugation and cruelty) that you didn’t have a concept of being wrong before now, suddenly. Can forgiveness be granted retroactively?

But even more interesting than all that is the idea of animal businesses. Capitalist chickens selling their own unfertilized eggs at a farmer’s market. Hey, at least they’re making money for themselves now!

Bennett’s story is fascinating, and frenetic, but also full of love and kindness. Jesse and Sandor are a beautiful team, and following them on their journey not only entertains, but forces you to come face to face with your own values over and over again. It’s not many comics that do that.

Helping this mission along is gorgeous artwork by Rafael de Latorre. There’s no difference between humans and animals in this story, and de Latorre makes sure we know this by ensuring that the animal characters have as much nuanced expression as the people do. Also, despite some of the animal gruesomeness of the comic, the art itself is very soft, which works here. De Latorre’s soft lines coupled with Rob Schwager’s use of light, pale colors, which almost evoke a children’s storybook, reminding you that this is ultimately the story of a child.

The trade ends with a special one-shot called Animosity: The Rise, which speculates on where the animals can go next, now that they’ve achieved consciousness. It will send your speculation juices flowing.

Animosity is a beautiful, frightening, thought-provoking read. It’s the rare comic that will stick in your head and be making you think long after you’ve stopped reading it. Next time you’re in your LCS (or on their website), pick up the Animosity Vol. 1: The Wake from AfterShock Comics. I think it’s actually best to experience it in trade paperback first, because once you read the first issue, you’re going to want to binge the heck out of it.