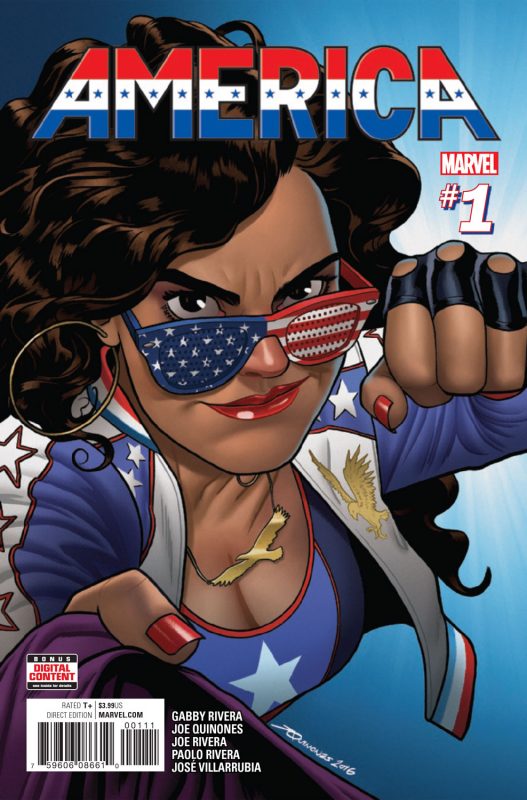 Up until now, we’ve had to be satisfied with glimpses of Marvel heroine America Chavez in team books like Young Avengers and A-Force. Now, in a book simply titled America, brought to us by the Latinx team of writer Gabby Rivera and artist Joe Quinones, Ms. America finally has her own solo book!

And this book will find her embarking on her greatest adventure yet…college!

No, really. She’s kind of over the whole “hero” thing, having been in the Teen Brigade, the Young Avengers, and leader of the Ultimates. So, after a kinda too-easy mission defending the planet Maltixa in the Utopian Parallel with the Ultimates, America sets off to study at Sotomayor University. (If you think that the school is named after Puerto Rican Supreme Court Justice, Sonia Sotomayor, you would be correct! The school even has a Sotomayor hologram greeter, apparently.)

However, while hero-ing is easy for her, feelings are not. After being orphaned, America isn’t too great at letting herself connect with anyone: not authority figures, not fans, not friends, not even her girlfriend. She’s just very uncomfortable in situations that don’t require her punching someone in the face, okay? So, when an opportunity comes up that allows her to time travel the multiverse? She sure as hell is gonna take it!

America #1 is a great start to a series with a lot of promise. America herself is a wonderfully nuanced character who has a hard edge, but whose vulnerability seeps through. Writer Gabby Rivera’s voice pops off the page. It’s unique, and lively, and youthful, which makes sense since Rivera’s previous writing has been in the YA fiction sphere. However, some of the dialogue is a little cliche, particularly in the scene between America and her girlfriend, and some of it kinda hits you over the head in reminding you that America is Latina:

Spectrum: Hit her with a blast to the chest, but she’s stable. It came up on the scans as pure white energy.

America: Pure white energy, huh? Well, pure white just means the absence of color…so let me give her a little of this brown fist! [PUNCHES VILLAIN]

Typing that out just now, it occurs to me that, out of context, a lesbian exclaiming these words could have a whole other connotation. That’s not the connotation here, just so you know.

ANYwho, there are a couple of little moments like that where I wish that Rivera would just let the character’s Latin-ness speak for itself, rather than have the character comment on it. Then again, I can chalk that up to this being the first issue and, much like a TV pilot, it has the job of setting up a lot, including the tone of the book, which usually makes it more heavy-handed than the rest of the series might be. America is clearly a book that wears its Latinx heritage proudly, and there ain’t nothing wrong with that!

Plus, there are some smaller, more interesting aspects to America’s dialogue. I noticed that, when saving a child, she said that she needed to “get this kid to their family.” As drawn, the child looks female, and the child’s name is Mari, but having a queer character like America use a “they” pronoun was thought-provoking indeed. She, of all people, is not going to assume anything about people she doesn’t know.

Meanwhile, Quinones’ art is awesome from a layout perspective. The panels themselves, as well as the goings-on inside them are kinetic and compelling. There’s a bit of a loss of detail and personality in the regular, less action-based panels, though. Still, I love how he draws America, full-hipped and athletic, sexy without a boob window. Shout-out, too, to the mostly-Latinx art team! In addition to Quinones, we’ve got Joe Rivera and Paulo Rivera on inks (brothers, no relation to Gabby), Jose Villarrubia on colors, and Travis Lanham on letters.

America #1 is a solid first issue for a series I hope goes on a really long time. If any character deserves a solo book in the Marvel universe right now, it’s America Chavez.

Oh, and the final panel of the issue is epic!