A cult classic in the making. 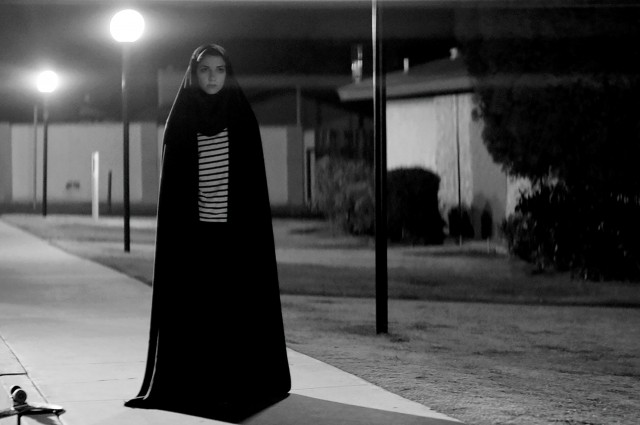 If the title A Girl Walks Home Alone at Night sounds like the set-up for a joke, you’d be right. The new Iranian-language, American-produced, western-inspired vampire movie is one of the weirdest and funniest movies of this season – which also happens to have a surprisingly compelling love story. The movie is one of the most interesting movies of the year, which features a star-making performance by Sheila Vand and a stunning feature film debut by writer/director Ana Lily Amirpour.

The story focuses on Vand’s unnamed Girl, a chador wearing woman who appears to be about 17 and innocent. In reality, she is a vampire stalking the bad men of bad city. The bad men include pimps, drug pushers, and abusers. She feeds off the blood of the men who deserve her punishment, which ultimately alters the lives of Arash Marandi, the son of a drug addict, and a prostitute played by Mozhan Marnò, who is under the thumb of a pimp. By chance, Vand’s Girl meets both, developing a strange, near-friendship with Marno and romance with Arash, in one of the best meet cutes in recent years.

Amirpour is a director with remarkable, vast knowledge of cinema and culture from around the world. She borrows considerably from the films of Sergio Leone; but also other sources of cinema, which are treated as Easter eggs for movie lovers, though they’re stylistic choices which still fit the tone and narrative of the film. There have been claims the film is in some way a hipster appropriation of pop culture of the past, but the comment on how we use culture to be a part society is critical to the character of The Girl. The little things she collects and hangs on her walls are not just those of her victims, but also of the living people she exists alongside. And likewise, once you’re a vampire for decades, does the time or place that a piece of art (such as pop music) comes from really matter? When she discovers a skateboard, one of the greatest scenes in the film, it isn’t so much an exhilarating experience, as it is just one more new experience she can have in a long, lonely life.

The movie is shot in black and white, which today is always a stylistic choice. There is no narrative reason for the decision, but in terms of placing the film in an otherworldly, cinematically-inspired universe, it works. It also happens to be a beautifully shot and composed piece of work. But the film isn’t just an exercise in stylistic choices, it’s also a character study on two of the saddest people who happen to find one another. And in that way, the look, style, and tone of the film all contribute to the story’s understated emotional impact. Amirpour is one of the biggest finds as a director this year.

As for Arash Marandi, a star in Iran, he is an actor with whom I was previously unfamiliar, but now I can’t wait to see again. Dressed by Amirpour to look and act like one of the rebel teens of the 50s, with white shirt, smokes, and greased hair, he still avoids impersonating these Hollywood ideals. Yes, he looks like someone out of those film on the surface, but he’s also as awkward as Dustin Hoffman in The Graduate. He’s masculine, but he is also a fragile boy; a boy The Girl can protect.

The Girl, Sheila Vand (of Argo) is certainly going to become known as a breakout star this year for this performance. And while she is a striking young actress, she is also nothing short of mesmerizing to watch on screen, and is in complete control of her character. She becomes the vampire, in a chador and white striped shirt, like Batman going into the night with his cowl and cape, looking for offenders. She walks as if possessed by what is in front of her, no need to think of the direction. And her first moment of vampirism is so weird and unexpected, you instantly sit up in your seat. In what might be her best scene, she becomes the monster to a little boy she warns to behave, and not be like the other bad men. Yes, Vand can be unexpectedly terrifying; but her compassion, despite everything else she does, is always with her because of the lonely, sad life she is leading, decade after decade. She is the perfect match for our poor Arash, and their awkward, funny, scary love story is one of the most interesting and satisfying on film this year.

As for the film’s use of the chador, I’ll be interested to see how people react to the way in which it is used primarily to give the impression of a vampire’s cape. This film challenges pervasive Western stereotypes, making the chador part of The Girl’s power and strength; it functions like a superhero costume one uses to get into character before the fight. Amirpour makes no direct comments on political, regional, or religious ideas in this film, and even in interviews hasn’t commented on the film’s connection to Iran’s politics or feminism. Amirpour is a director who wanted to make an Iranian film that isn’t directly about how that country is seen by the outside world, something English language films are also not obligated to do. Nor, it seems, does Amirpour want her film to be a comment on women’s lives today, or on modern feminism. However, I also believe the film would have been completely different had the gender roles been reversed; and likewise, if she had she not been wearing the chador.

A Girl Walks Home Alone At Night is one of several great movies about strong women this year (although too few in mainstream Hollywood), but also one of several which shows women as predators of men. Don’t be surprised if, like with Under the Skin and Gone Girl, men are a little freaked out by this film, especially if it is a hit – which it certainly deserves to be.