The Resurgence of Buffy the Vampire Slayer 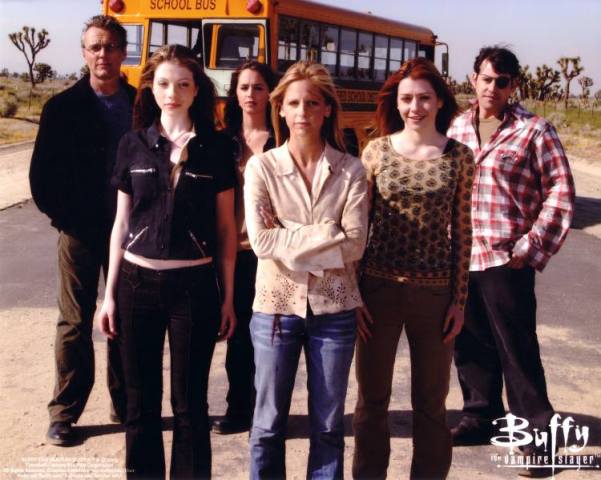 It’s been almost 20 years since Buffy Summers slew her first vampire and changed the way we viewed female characters forever. As I write this, I can look up and see the Buffy prints and figures that inspire me daily to work hard, love deeply, and never be afraid to embrace my cookie dough-ness. Buffy has played a big role in my life for nearly two decades, and unlike many other shows of its era, Buffy refuses to fade away. I recently interviewed Amber Benson, who played Tara Maclay on Buffy the Vampire Slayer, and we briefly talked about how Buffy has a certain special place in the world of pop culture—one that seems to grow stronger with each generation, not unlike the Slayer herself.

All around me, Buffy is thriving. My Tumblr and Twitter timelines are often filled with Buffy references and newbies excited about the show. Even Sarah Michelle Geller, who in the past was a bit reticent to discuss her Buffyness, has fully embraced the show’s power and community on Twitter.

It was something that stuck in my brain, like a metaphorical Mr. Pointy. On a recent visit home to Michigan, I spent time with my two younger cousins who are both obsessed with the show. We’re nearly a generation apart, but the three of us connected deeply about Sunnydale and the Scoobies. It got me thinking, “Why has there been a recent resurgence in the popularity of a show that grew up in the era of Don’t Ask Don’t Tell, chunky highlights, and no cellphones?”

Not unlike Anya Christina Emmanuella Jenkins, I have a theory. (Spoiler: it ain’t bunnies.)

In 2016, we are blessed with an embarrassment of riches when it comes to strong female characters. I know, some may groan at the mere mention of SFCs, but it fits here, people. Jessica Jones, Bo Dennis, Peggy Carter, Michonne, and Clarke Griffin are just a few of the characters who are bringing us ass-kicking drama and heart on the regular. Women characters no longer need to wait around to be rescued by the hero—they are the heroes. This surge of heroines creates a feeling that’s only normal when you’re introduced to something you really love: You want more. It’s like an endless circle of awesome. Buffy inspires a generation, and that generation goes on to search out more characters like Buffy. New viewers, brought in by these new characters, go in search of more and come across Buffy, one of the pioneers.

While my theory may not work in every situation, any discussion about fascinating and powerful female characters is worth having. No matter what draws you to Buffy the Vampire Slayer, the fact that it is alive and thriving means that there’s an audience that still very much needs it. With this in mind, I asked a few Buffy newbies (and my much-cooler-than-me cousins) to talk about how and why they came across Buffy.

Lisette (13 years old) was originally inspired by her older sister’s fervor. They both started watching the show two years ago. For Lisette, it’s about the friendships on the show. “I really like Willow because she’s really resourceful and a great friend and companion to Buffy.” She’s also quite into the show’s writing. “Buffy is really well written,” she tells me. “Each episode is interesting and different. I also like how it all ties in at the end of a season, and it’s super creative.” She’s inspired to watch more female-led shows, too. “I’m hoping to watch more shows with stronger female characters soon.”

Older sis Carina (17 years old) is all about empowering female characters and actually got into the show because of her dad. Carina says, “For me, Buffy is all about “the family you find,” which is a topic that really connected with me because my family is often away. I also love the presence of strong female characters, and the whole concept of the “big bad.” I watch a bunch of shows with female leads, and I have watched Jessica Jones and Supergirl. I’m excited for The 100 to come back.”

For Heather (29 years old), it took a nudge from friends to finally watch the series, and now she loves it. “I’m fairly new to the Buffyverse, as I only began watching it a little over a year ago. I kick myself for not getting into the show sooner. What was I thinking?!” Heather found the characters in Buffy deeply relatable, especially Tara. “When I was younger, I was a very shy person, always worrying about what people thought of me. I still deal with some of those feelings today, but I have definitely grown to become more open and strong-willed.” She’s also not above a little extra flamey shipping. “I’m straight, and I absolutely ADORED Willow and Tara. My personal favorite couple on the show!”

Samantha (26 years old) came across Buffy this November when she made a deal with a friend to trade off on their favorite shows. “I didn’t actually have the motivation to do it until a good friend of mine (whose favorite show is Buffy) promised to start Person of Interest if I started Buffy in return,” she says. “I thought it was a pretty fair tradeoff, considering they’re both a little rough at the beginning, eventually get amazing, and have a lesbian ship introduced a little ways into the series.” For Samantha, strong female characters are a major factor when choosing what to invest her time in. “I try to center my television choices around shows that have powerful roles for women. Orphan Black is probably my all-time favorite show, followed closely by Battlestar Galactica (where my favorite character is President Laura Roslin). I love Person of Interest, and Root is one of my all-time favorite characters.”

It wasn’t that Buffy was the first and only strong female character, but the show redefined what it meant to be strong and female. Strength is taking care of a family, dealing with loss, and forgiveness, just as much as it is about slaying demons. We seek out things that feel relatable. We may not be Slayers, but we can all relate to the struggle of forging your own path in this world, to friendships that sustain us, and having a say in our own destinies. So, let’s keep on spreading the gospel of Buffy Summers and keep the circle going for the next generation of Slayers.

What are your theories on why Buffy the Vampire Slayer is still so popular?

Dana Piccoli is a pop culture critic and entertainment writer who lives in New York’s Hudson Valley. She’s a current writer and former Staff Editor of AfterEllen, and covers The 100 for Alloy Entertainment. She’s also written for Curve Magazine, Go Magazine, PopWrapped, and Gaygamer.net. She’s currently writing a lesbian romance novel she’s hoping you will read one day soon. You can follow her on Twitter and Tumblr.

Buffy the Vampire Slayercontributorwomen in film