Twitter Screwed Up Their “Block” Feature, Users Respond With #RestoreTheBlock

A website changed something and the Internet is furious over it? Who would have guessed? 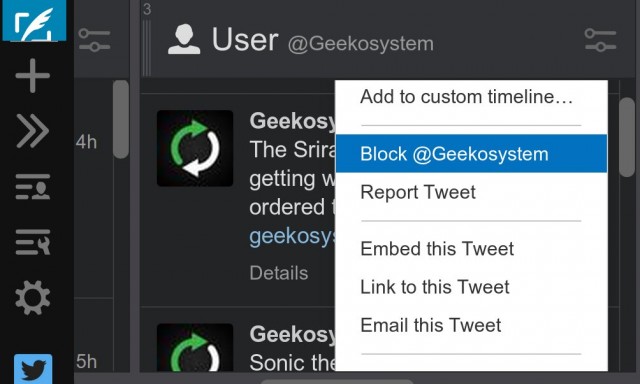 When YouTube changed their policies this week, we called the Internet out for overreacting. It seems like Twitter wanted some of that negative attention, and they’ve certainly gotten it. Twitter changed their block feature. The Internet is reacting strongly, but it seems like it’s a matter of not understanding the changes that were made.

The change turned the block feature into a mute button. Users you want to block are hidden from your feed, but you’re no longer hidden from theirs. It seems some people have misunderstood and think the block has been eliminated altogether. The reason for the change, as told to Forbes by Twitter spokesperson Jim Prosser, “We saw antagonistic behavior where people would see they were blocked and be mad.”

Prosser also makes the point even if users with public accounts block someone, their content is still public. The blocked person can still see the content by looking at your feed without logging in or creating another account. The idea that blocking an account from seeing your public feed is an illusion. Prosser also said, “Twitter is public, we want to reinforce that content published in a public profile is viewable by the world.”

Most of the tweets using the hashtag #RestoreTheBlock focus on the issue of harassment, which is serious. It’s hard to judge from a 140 character tweet, but it looks like some people believe the block has been eliminated altogether. Others have made it clear that they understand, but still aren’t happy.

We agree with Prosser’s point that people need to realize their content is still public even if they block individual users, but we disagree that it’s a reason to eliminate blocking as option. Sometimes, yes, users may wish to mute someone without their knowledge, but that should be given as one option — not the only one.

Harassment is a serious issue. Blocking might not solve it, but it’s currently the only action victims have on the site. Having that taken way, we can see why people are getting upset. Perhaps the bigger issue isn’t that the block has been changed, but that there’s still not a way to report abusive behavior on Twitter.

Twitter should restore the block, add muting as an option, and also put a system into place whereby users can report abusive behavior.

(via Forbes, image via Tweetdeck screenshot)