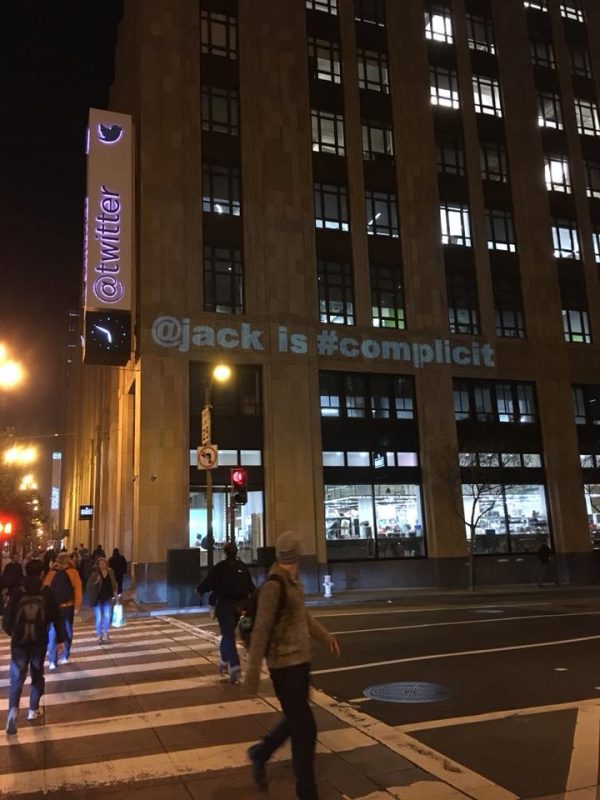 New Year, same Donald Trump tweeting us to the verge of nuclear war in some ridiculous button-measuring contest with North Korean. While Trump’s behavior and sensationalist language is no surprise, another upsetting pattern to this incident is the fact that Twitter continues to allow his spread of misinformation, inciting violent words, and other kinds of troubling behavior.

In response, protesters in San Francisco under the name Resistance SF projected the words “@jack is complicit” onto the outside wall of Twitter headquarters, calling for the banning of Donald Trump or the resignation of Jack. The event page reads:

“Jack Dorsey, CEO of Twitter and Square, has enabled @realDonaldTrump from his first dog whistles in the birther movement to his latest nuclear pissing contest.

Twitter is endangering the world and breaking its own terms of service to do it. Trump or Jack must go.

Dorsey has responded to criticisms in the past, arguing that they are not violations of the company’s policies and that they are aiming to provide a direct line of communication between the public and their leadership. It’s a difficult task in many ways, considering how mostly unprecedented this was previously with world leaders and the ways that technology continues to change the way we consume and share information. Still, it stands that when the President’s words are actively threatening harm for many, it seems irresponsible to do nothing. In the caption for the image above, they write, “@jack breaks the rules of his own company, Twitter, to amplify a madman and endanger the world. Jack Dorsey must resign or ban @realDonaldTrump”.

(via The Verge, image: Resistance SF)