RESIST! Gives (Mostly) Female Artists the Chance to Speak Out Against the Impending Trump Regime 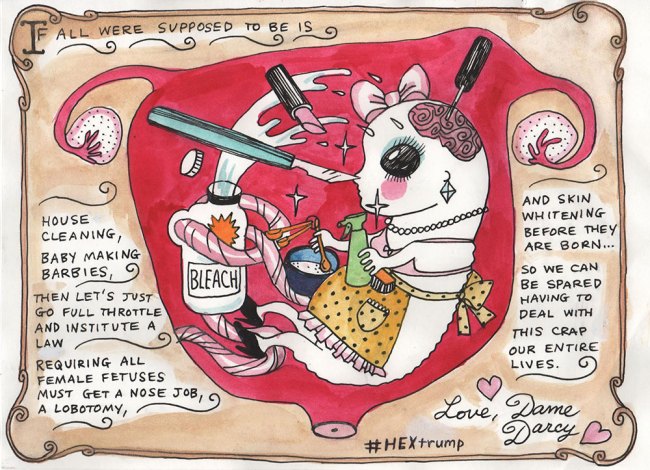 One of my first thoughts after November 8th was that, at the very least, it’s likely that a bunch of great art will come out of the next four years. It looks like that’s already begun thanks to Françoise Mouly, art director at The New Yorker; her daughter, Nadja Spiegelman; and Gabe Fowler, publisher of the quarterly comics anthology Smoke Signal.

Their project, called RESIST!, is an outlet for artists to express their ideas, thoughts, and feelings about “Trump’s America,” and according to the RESIST! website, artists who submit are asked to reflect in their work “political resistance to the forces of intolerance.” The project has two parts: first, is the RESIST! print edition, which will be an all-women special edition issue of Smoke Signal edited by Mouly and Spiegelman that will be distributed for free. Second is the website, where artists of all genders can continue to submit, though preference will be given to women, people of color, and the LGBTQIA communities.

According to New York Magazine’s The Cut, when Spiegelman launched the RESIST! website requesting submissions for the print edition, “Within days, they’d received an outpouring of responses, and by the time their deadline hit, Spiegelman says they’d gotten more than 1,000 submissions from artists across the country. And although they were adamant about funding the paper themselves, they also received about $4,000 in donations—enough to print and distribute more than 30,000 copies of Resist! on inauguration weekend.”

The plan is to distribute the free paper in Washington D.C. during inauguration weekend, including at the Women’s March on January 21st. Print copies are also available for individuals to purchase if they’d like to have one (or several) delivered directly to their homes, and RESIST! is currently looking for “local point people” who would be the point person in their city, raise/donate $50-100 “which will allow [them] to ship tens or hundreds of issues” which the point person would then be responsible for distributing in appropriate places like book stores, comic shops, and events.

And then there’s the website, for which art continues to pour in (and is still being accepted if you’d like to submit). If you’re looking for inspiration or commiseration in this new America, you should definitely check it out. As Spiegelman told The Cut, “I think that pictures have a way of searing themselves into your brain and cutting through the hypocrisy. And constant and immediate reaction through pictures is a necessary form of political resistance.”