Possibly the last episode ever … *sniff.* 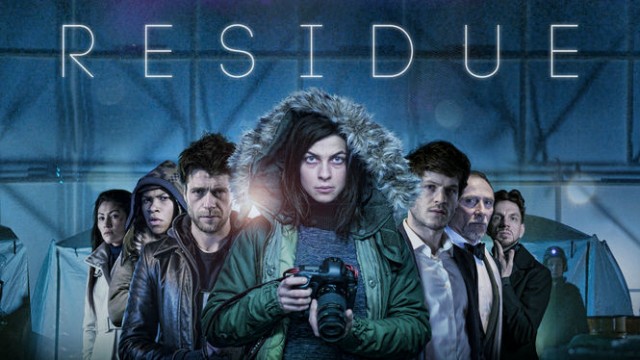 Final episode, everyone. If you’re still reading, I assume that you too are, if not hooked, at least mildly intrigued. Deep breath. Let’s begin.

We open on Jonas in the Quarantine Zone, wandering the deserted streets wearing a gas mask. His eyes are illuminated for us by lights inside the goggles which, I can’t help but notice, surely blind him with the glare. I love artistic liberties.

I’m staring at nothing.

We cut to the title sequence, sooner than in the previous episodes and possibly for the last time, a prospect that makes me sad.

Jen, who truly has the worst luck getting people to listen to her, is at the police station trying to report Jonas’s disappearance (even though it’s still nighttime, we’re left to deduce that it’s been 24 hours since Jonas left). The officer, named Freddy, is not only unhelpful but cartoonishly lecherous until Mathis intercedes and agrees to “do some checking around.”

Perhaps it’s because he’s actually helping someone instead of sulking about but I like Mathis here and, as if to remind me why I don’t generally care for him, we cut to Dickie in a bar.

Let me get through this as quickly as possible: Mr. B shows up and asks Dickie what he plans to do when Mathis comes a-calling for answers. While Dickie garbles for an answer, a lackey pops up behind him and stabs him in the back, and then a few more times in the stomach (great sound editing). So, there. No more Dickie. I know I’m supposed to be horrified, like, “Ooh, they’ll kill to protect themselves” but all I feel is relief.

Meanwhile, in the Quarantine Zone, Jonas approaches a mansion. (In what city is a mansion located within five miles of a grungy nightclub?) In the front courtyard, he comes across the covered bodies he saw on a monitor screen last episode. Some men in contamination suits emerge from the mansion carrying another corpse and Jonas runs for hiding. A military truck drives up and Jonas overhears one corpse-carrier tell a soldier that they’ve been ordered to take the bodies to Ops labs for examination before disposal.

None of them are wearing gas masks so, when they drive off, Jonas takes his off and enters the mansion.

“My whole life has been a lie.”

Back at their apartment, Jen calls Jonas, at this point, just to hear his voicemail (because he still hasn’t tried to contact her, in case you forgot he’s being a prick). Willy shows up at her door, and spills on Jonas’ whereabouts. Jen calls Mathis and they meet at a Chinese food stand.

He tells her about Dickie, who we’re just supposed to accept planted the bomb in the Nightshade nightclub for the gangster, Mr. B, whose full name is Emeril Benedict. The fact that the government is collaborating with gangsters doesn’t sit well with Mathis and Jen tells him that they need to go to the Quarantine Zone for answers (and Jonas.)

Mathis spots something over Jen’s shoulder, hands her a gun and tells her to leave. Once she’s out of frame, we see what caused Mathis’ sudden urgency. The police officer, Freddy, and two other men approach him and tell him he’s under arrest for Dickie’s murder. After a struggle, Freddy pulls a gun on him and Mathis submits to arrest.

Before we find out whether Freddy takes Mathis into custody or kills him, we cut away to Jen speed walking the hell out of there. See, now that Mathis has proven useful, I’m kind of, sort of sad for him.
The next morning, in her apartment, which she has stripped bare for some reason, Jen publishes all her photographs and findings on her blog, along with a mission statement to rescue Jonas. Now, if she considers her sojourn into the Quarantine Zone to be a suicide mission, this makes sense to ensure that the world learns the truth (‘cause folks have been so receptive thus far). It would also explain why she’s emptied her apartment.

However, if she has any expectation of survival, this is stupid. “Yeah, Internet. So, I’m totally onto the government’s machinations. If you want to find me, I’ll just be looking for my boyfriend in the following witness-free location …” As much as I’m enjoying Residue, I don’t always feel like these are actual human adults I’m watching.

We briefly return to Jonas, who presumably hasn’t slept or used the bathroom in over 48 hours and is still wandering around the mansion.

The bearded ginger continues to be mysterious as he chats in his car with another unidentified man (how many characters have I described that way?) about covering up Mathis’ removal and tying up loose ends. The ginger then calls Rossi and their conversation shifts to Jonas.

So, fun fact: when you’re trespassing on property in which the government is hiding corpses, it’s a good idea to cover your face because, surprise! There are cameras everywhere. Rossi’s on her computer scrolling through photo after photo of Jonas traipsing through the mansion and the ginger tells her he’s already sent a team to remove him.

Somewhere underground, Willy leads Jen to the same ladder Jonas climbed, all the while trying to convince her not to go (the cause of this change of heart is anyone’s guess). Jen realizes that he’s also seen the baby Dementors and asks him what they are. “You ever read that story, Peter Pan?” he says, “Do you remember his shadow?”

A few miles away, the military team the ginger dispatched finds an utterly oblivious Jonas in the mansion theater. Before they can seize him, though, baby Dementors/Peter Pan shadows infect them and they start firing at each other and accidentally shoot Jonas.

Just because I called him a prick doesn’t mean I wanted this!

Hang on, Jonas, Jen is on her way! And hopefully, she’ll go faster than you and get to that room in less than 48 hours.

Sure enough, our heroine has made it it into the Quarantine Zone (wearing a gas mask that Willy must have given her). As she makes her way through the city, her shadow on the plastic sheet flanking the street walks at a … slightly different pace than she is.  She turns around with a start and the shadow is gone.

A baby Dementor then forms behind her, Jen turns again to face it, starts lifting her camera, realizes how stupid that is, and lowers it. The baby Dementor molds itself into a human form, gets right up in her face … and then disappears.

A little girl shows up and tells her that the Quarantine Zone isn’t safe (no shit, sweetheart) but that she can remove her gas mask. She takes Jen to the mansion and explains that she’s one of a handful of people living in the Quarantine Zone. They hid to avoid evacuation (…why?) and the government’s been coming for them ever since.

She leads her up a staircase where the other stragglers stand. They part, like a stage curtain, to reveal … JONAS, alive and conscious and very, very penitent. “You were right,” he tells her. “About all of it. Y-you were right. I’ve seen them.” Ah, sweet music to my ears.

Admittedly, the dialogue devolves from there into pretty generic conspiracy fare. “It’s all been a lie,” “the government men  … shot him” “There is no contamination, not the way they’ve been telling us.” Blah, blah, blah … but I’m too happy at Jen and Jonas’ reunion and Jonas’ apology to care.

Jen makes up her mind. They’re all going to cross the border out of the Quarantine Zone so they can A) get Jonas to a hospital and B) expose the truth to the world, preferably in that order.

They start the journey but soldiers, presumably reinforcements for the ones who killed each other, are hot on their heels. In true Stormtrooper fashion, they only shoot the nameless unimportant ones and Jen, Jonas, the little girl and some of the other stragglers make it to the border where … surprise, surprise, there are more troops. (They had to see that coming, right?) The soldiers don’t shoot them dead, however, because there are journalists present with cameras, chillin’ by the Quarantine Zone check point in the early hours of the morning. As journalists do.

A soldier helps Jen support Jonas, who is starting to look like one of the ghosts from Scream Team.

Some time later, Rossi delivers a statement to the press. The “scavengers and petty thieves” who breached the Quarantine Zone are seeking medical treatment at a secure facility, along with Jonas, as they are all suffering from high levels of contamination.

Jen wakes up tied to a hospital bed in an enormous and ridiculously frightening room. The ginger, who finally introduces himself as Hollings Keller of the Ministry of Defense, assures her with soft-spoken, villainous bedside manner that she’s “somewhere safe.” Jonas is recovering physically but they’ve had to move him to one their psychiatric facilities.

My reaction is simultaneously.

Because in sci-fi stories about governmental tyranny, psychiatric treatment can only mean one thing: 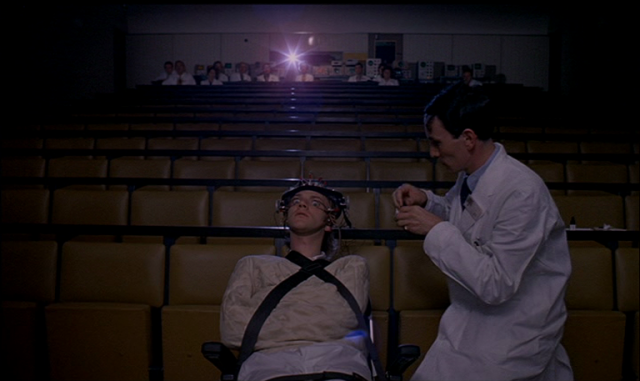 If this gets a 10-episode season (and it totally should) and if Jonas is getting brainwashed (and he totally is), my one wish is that Alfie Allen play the doctor brainwashing him.

Please! You can’t not do that. It’s only fair. I will start a petition on Change.org to see that happen. (I have very small dreams)

Anyway, on a sadder note, the little girl and the others have died from “contamination.” The only reason Jen is still alive (and perhaps why they’ve reserved this gigantic room for her) is because they know she survived the baby Dementors, and they want to know how.

Jen is as uncooperative as you’d expect her to be but Keller assures her she’ll help them in time. “After all,” he says, “I’m not entirely sure anyone knows that you’re here.”

Rossi continues her press statement in voice over as Jen struggles against her bonds. “The public have every right to know its government have this situation under control,” she says as, one by one, the lights in Jen’s private coliseum switch off, leaving her in darkness.
The end.

So, that’s Residue. Ridiculous and clunky and utterly wonderful. It wasn’t until the cliffhanger ending that I realized just how invested I was.

I mean … look, as a season of television it’s pretty mediocre. It’s inconclusive and poorly paced. However, as a pilot (which is how producer, Charlotte Walls, says it should be “thought of”) it’s a great set up for a first season. Jen and Jonas are already in the belly of the whale and the mystery of the baby Dementors is ripe for the solving.

It’s certainly imperfect but rather than write it off as a half-baked idea or a poorly executed story, I liken it to a diamond in the rough. It has potential. It just needs (and deserves) more time to be fully realized.
And if another season is never commissioned *throws salt over shoulder,* it still works as a somewhat guilty pleasure well worth a 3-hour binge.