Review: In Resident Evil 0 Remake, Hell Is Bugs, Inventory, and Other People 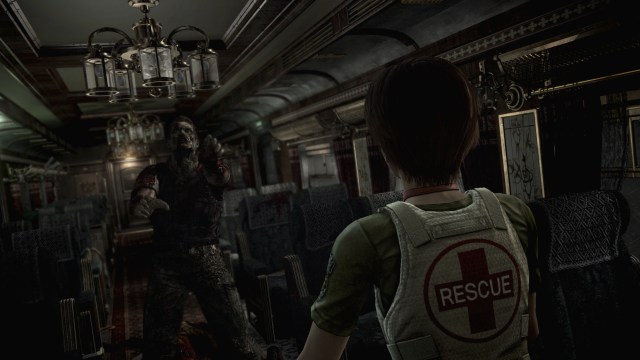 Resident Evil 0 is one of those classic Resident Evil games where I’m sure I’m going to screw myself over and permanently ruin my chances to survive if I so much as blink wrong.

Should I use this last ink ribbon? Would saving now after that amateur display of shooting be a mistake? After I was sloppy enough to allow that zombie to bite me in the leg and the other in the neck? Look how few bullets I have left. Look, for god’s sake.

These are the thoughts that usually run through my head as I’m blowing up zombies and virus-infected monkeys and bugs and frogs (and bugs) and other wonderful creatures. As much as fretting over resources and health and limited inventory space makes surviving and reaching the end of the game incredibly satisfying, the last thing any sane person needs is for that to get any more complicated. 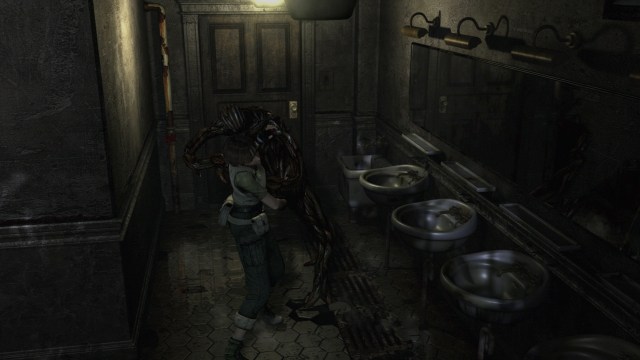 That’s Resident Evil 0 in a word: complicated. You thought it was difficult managing six inventory slots? How about we give you six more but make you wish we hadn’t? Somewhere in hell, the developers are laughing.

Capcom’s nearly 15-year-old survival-horror game just came out as a remastered edition on PlayStation 4, Xbox One, PS3, Xbox 360, and PC, and underneath the gloriously high-definition finish—dirty dinner plates abandoned on cloth-covered tables, paintings more vivid and dusty than ever, and zombies with sickening, glimmering red flesh—Resident Evil 0 shows its real age, and it looks ancient. For those who have played the game before and get the reference, Resident Evil 0 remastered is basically the leech-controlling man when he reveals his real identity.

In all fairness, Resident Evil 0 does some pretty cool things. You can switch between two characters, S.T.A.R.S. member Rebecca Chambers and convict Billy Coen, on the fly. Even when you’re controlling one character, you can make the other move with the R stick if you want to dual-wield it. A nice touch with the remastered version is that you can switch between newer controls or the classic tank controls—your decision.

Each character has their advantages. Rebecca can mix herbs and squeeze into small spaces like vents. Billy can absorb more damage and move heavy boxes. The character that’s controlled by AI will shoot enemies … not quite as well as you would … with whatever weapon you have equipped, even if you’re not in the same room. 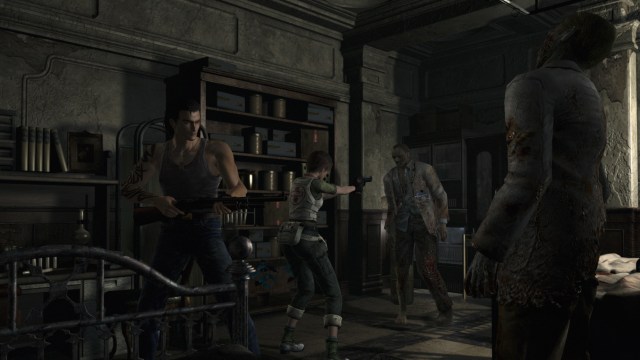 You can exchange items between Rebecca and Billy when they’re in range of each other, and you can move around either as a team or control them separately, in different locations. If your inventory gets full, you can litter the ground with items—drop a green herb here, some ammo there, and you can return anytime to retrieve them. The locations are marked on your map in case you forget.

These are nice innovations for a Resident Evil game—this is long before Resident Evil 5’s Chris and Sheva, and at least Rebecca and Billy’s AI won’t waste health items at every little scratch (they actually won’t use them at all unless you do it for them). But the freedoms that these features provide also heap on a bunch of restrictions, and a chunk of your time playing the game is finding ways to work around them.

The textbook example of how this goes wrong came, for me, when I had to use the hookshot (a tool that gets you to out-of-reach places) to send Rebecca or Billy up into a separate section of the laboratory. Resident Evil 0 includes a handful of locales—a runaway train, a training facility that looks an awful lot like the infamous mansion, and more—but the lab is especially “fun.”

Bigger weapons like the hookshot (a tool you use a total of like four times but have to lug around) take up two slots instead of one, which makes them a pain to carry around. That left me with four inventory spaces for Billy, half of which I needed for his gun and ammo. As soon as I got him to the floor up above, I ditched the hookshot (which, of course, I needed to remember to grab later). 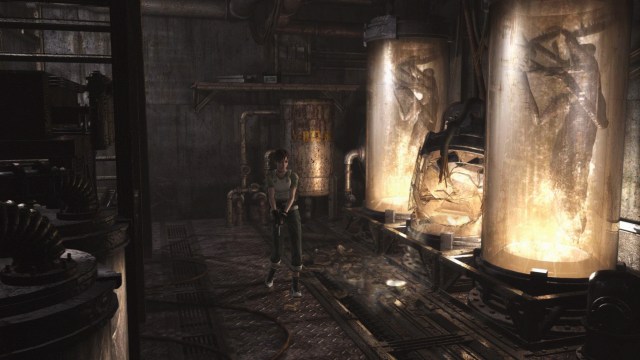 I ran around that part of the lab, doing a bunch of things and eventually getting stuck behind a locked door. I was able to use a service lift to send items down to Rebecca in the other part of the lab so that they could exchange items—a painfully slow process, and one I did about 50 times as characters found items the other could use more, such as health or specific items or ammo. (You can’t send guns through the lift.)

But the real clincher was that I had sent the wrong character up with the hookshot, and now I was screwed. (Yes, that old fear.) I was going to have to risk Rebecca’s current health and ammunition to send her all the way back to a previous location just to get one damn chemical I could have gotten hours ago.

As a GameFAQs thread kindly explained to me, if I had sent Rebecca up with the hookshot instead, I would have access to both chemicals I needed to progress—without needing to hike all the way back to get the one. Most people never think to send Rebecca up with the hookshot because she’s a lot more vulnerable health-wise than Billy. But because Billy doesn’t have a mixing kit, I couldn’t even collect the chemical and send it over to Rebecca through the lift. I had no choice but to go back—unless I restarted and did that whole sequence over again. 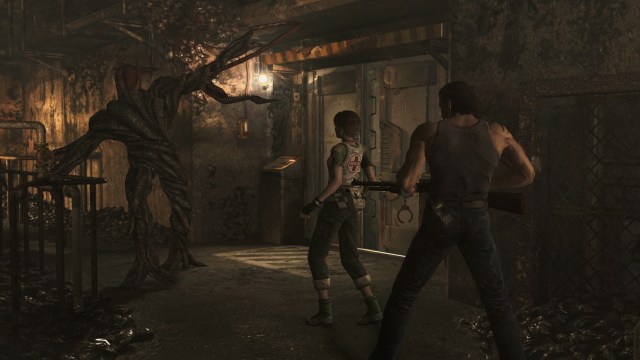 Now, don’t get me wrong. Resident Evil 0 is fun—you shoot zombies, you fight all sorts of horrifying monsters who play dirty and you hate them (I’m looking at you, monkeys), and you get to watch some really cheesy cutscenes and solve random puzzles like a giant chess board that spews poisonous gas if you move the wrong piece—but I wasted so much of my time on inventory management that I would actually save the game just so I didn’t have to swap a dozen items back and forth through a lift all over again if I died.

Having the ability to drop and retrieve items (as opposed to global inventory box) isn’t so nice when you realize you have to cart those grenade rounds you plan on using later all the way from one area to another if you want to keep them close by, and having two characters with 12 item slots between them loses its appeal when you have to mix items for the other or carry around extra ammo that you can’t use just because you know the other character will need it, and they may run out completely otherwise. I’ve dragged Rebecca places that I didn’t want to for inventory reasons, and then when she got caught by a zombie, I had to stop and help her and waste ammo instead of running far away like a normal person would because if I didn’t, she’d stay there and get eaten, and then it would be game over for both of us. Vice versa for the other character. See? This shit is complicated.

Okay, so Resident Evil 0 is quirky. I can live with that. I banged my head against the wall and sorted my inventory for 10 minutes every half an hour like a good little zombie-killer. I had fun putting rabid monkeys in their place. I squashed a lot of leeches and bugs (this game loves insects). 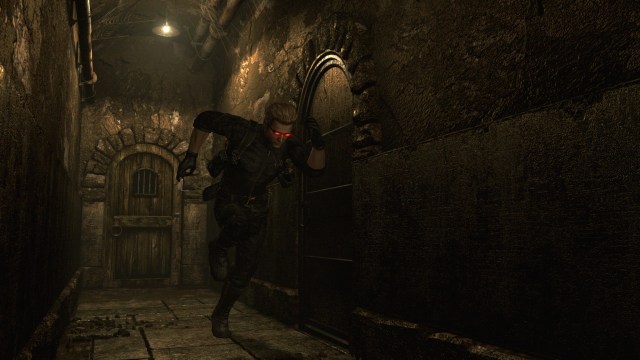 The remastered version even adds Wesker Mode, which gives Rebecca a ridiculous “evil” outfit and glowing red eyes and allows you to play as Wesker instead of Billy. (Wesker can “Shadow Dash” and “Death Stare” enemies.) And you can also play Leech Hunter, an unlockable extra where you run around the mansion trying to collect as many blue and green leech charms as you can without dying.

And at least then, I would only have to do half the inventory management.

Resident Evil 0 is available for PlayStation 4, Xbox One, PlayStation 3, Xbox 360, and PC. The publisher provided a review code for the purposes of this review.