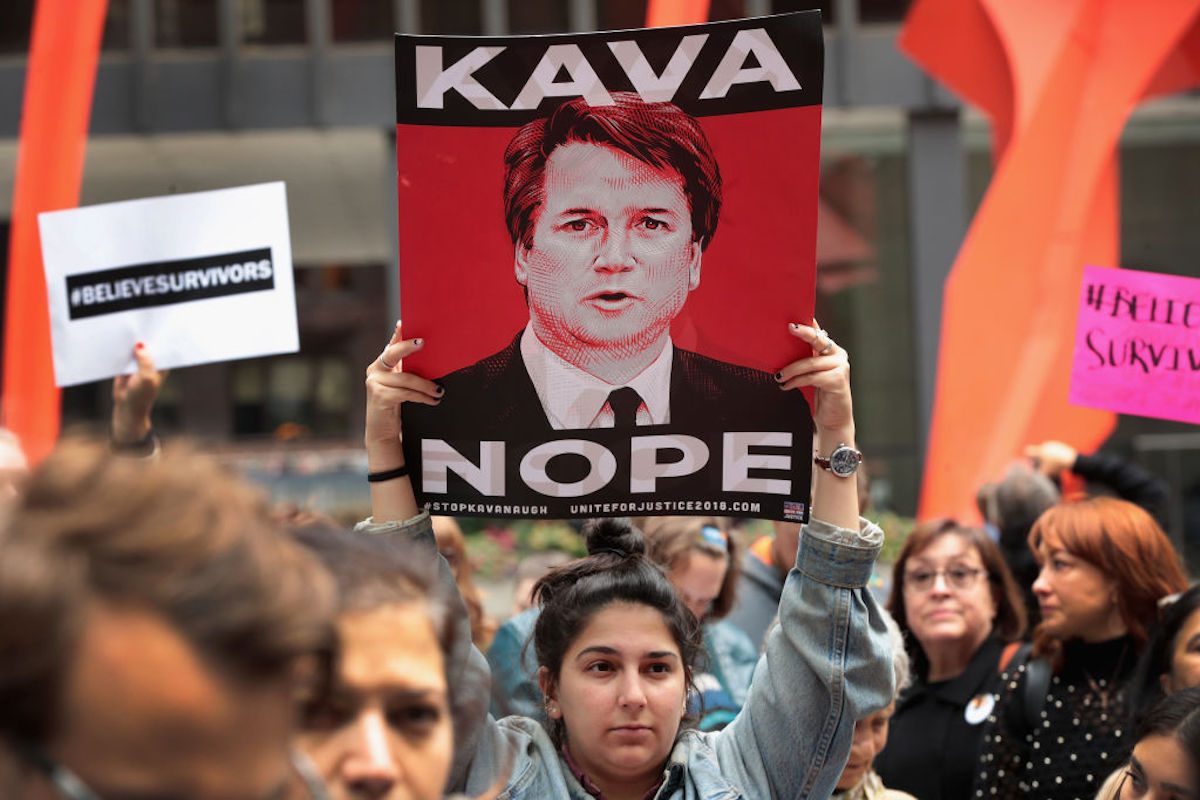 Following the confirmation of Brett Kavanaugh to the Supreme Court, President Trump has been leading Republican senators in a self-congratulatory victory lap for the glorious, noble act of putting an intemperate man-child accused of sexual assault by several women on the highest court in the land.

One recurring talking point by the president, who is credibly accused of sexual abuse by more than 20 women, and his cohort of fellow enablers has been slamming the hundreds of thousands of women who protested Kavanaugh’s nomination in D.C. and across the country as “paid political actors.”

Apparently, it’s inconceivable to Trump and his allies that womenfolk are capable of forming our own opinions, let alone standing up for these opinions, and that survivors spurred to action by their heartache and trauma actually exist.

In several tweets last week and over the weekend, Trump called survivors of sexual assault who confronted Jeff Flake about his support for Kavanaugh in an elevator, “very rude elevator screamers,” and “paid professionals only looking to make Senators look bad.” In the same tweet, he claimed they were “paid for by Soros and others,” and said their signs, many of which bore heartfelt messages about protesters’ personal experiences with surviving sexual assault, were “not made in the basement from love.”

On Saturday morning, when protesters flooded the Capitol, the Supreme Court, and the Senate chamber prior to the vote, Trump doubled down on these claims, and has since paradoxically taken to calling these supposed “actors” an “angry mob.”

In a similar vein, senators like Orrin Hatch have dismissed testimony and confrontation by protesters who identify as survivors as political acts and posturing; Hatch notably waved off women protesters who confronted him, telling them he would debate them after they “grow up.”

Sen. Susan Collins, in an intellectually insulting speech defending her support for Kavanaugh on Friday, decried the “circus” and lack of dignity around Kavanaugh’s nomination—as if protesters were fighting his nomination not from a place of genuine compassion for the lived experiences of survivors and the threat he poses to women’s most fundamental human rights, but out of petty politics. Right-wing conspiracy theorists have helped to back up this narrative by sharing now viral tweets of “actors” protesting Kavanaugh being “paid.”

It should go without saying that these claims by the president and his party are transparently about invalidating a movement for justice, and gaslighting the nation to hide how vastly and deeply opposed most Americans are to the president and majority party’s vile agenda.

Dismissing the hundreds of thousands of us who organized and protested Kavanaugh allows Trump to pretend that the Republican Party is not undermining the will of the American people, and subverting democracy itself in the name of upholding male hegemony. 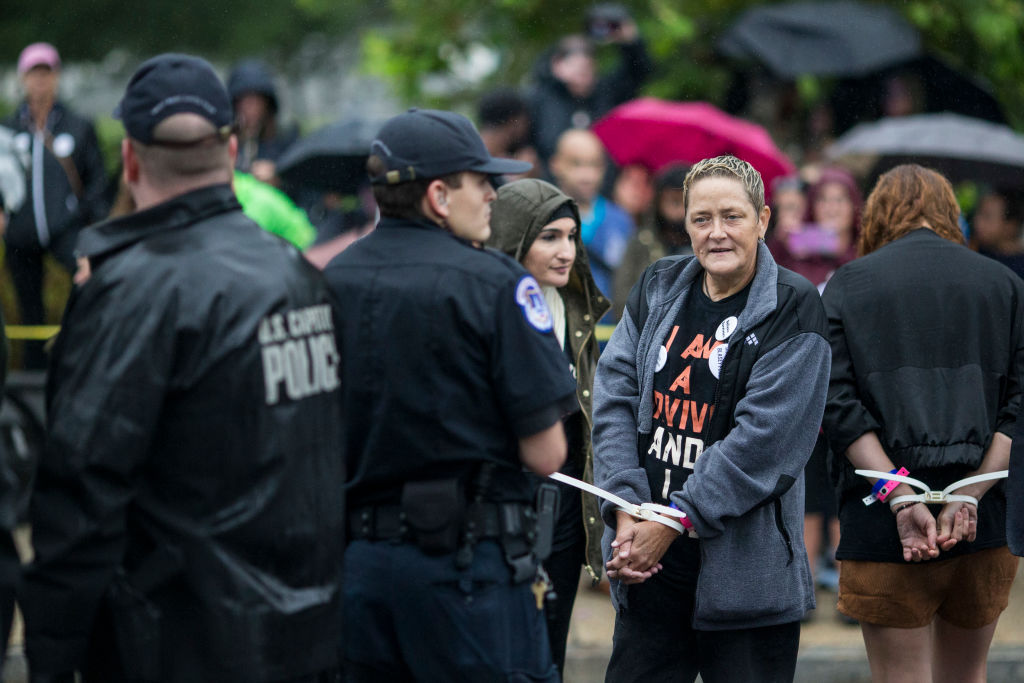 But there’s another underlying message to this flimsy, easily disproven narrative: that women lack minds and opinions of our own, and are only capable of doing what we’re told to; that we are fundamentally lacking in the strength, will, and autonomy to be leaders in the democratic process; that survivors who share their stories are dishonest “political actors.”

Additionally, senators who have labeled Kavanaugh’s confirmation process as a shameful “spectacle” and “circus” are essentially suggesting that women protesters and survivors are the ones who are out-of-control for doing everything we could to stand up to a sexual abuser.

Meanwhile, they suggest that senators who seized upon their disparate power to put a sexual abuser on the Supreme Court were behaving entirely appropriately.

For many women and survivors, watching Kavanaugh’s confirmation process play out—from when the allegations first arose, to the dramatic Senate testimonies of Dr. Christine Blasey Ford and Kavanaugh, to the confirmation vote itself—we saw ourselves. We saw the reasons we did not report our own experiences; we saw our fears of male rage, entitlement and violence without accountability magnified before our eyes.

We saw our president mock a survivor before a crowd roaring with laughter; we saw him dismiss another woman who accused Kavanaugh as not credible because she had been drunk during the alleged incident. And the nation, at large, saw why between 62 and 84 percent of sexual assaults, which include one in five of all women, are not reported.

We’ve watched as, within days of bemoaning the death of “due process” and “innocent until proven guilty,” Trump’s base has resumed in chanting “lock her up!” at his political rallies. In other words, their refusal to believe survivors was never about a noble yearning to uphold and protect the Constitution, and always about hurting women and empowering men to do whatever they want without consequences.

After all, have any of the people who demand the “innocent until proven guilty” standard for men accused of abuse (including First Lady Melania Trump, who said on Wednesday survivors must provide “hard evidence”) ever specified what, exactly, would suffice as proof of their experiences? Contrary to popular belief, most people don’t wear body cameras capturing everything they experience wherever they go; many sexual assaults take place without witnesses or DNA evidence, or are reported after too much time has passed for survivors to provide evidence beyond their testimony.

Of course, none of this matters to the most powerful men in the country. They’ve made this perfectly clear in their unwavering commitment to forcing Kavanaugh down our throats, not despite, but because of the message his confirmation sent to women and survivors: that this is not our country, that, for all the progress #MeToo has made, men still rule.

The president and nearly every leading Republican senator who facilitated Kavanaugh’s confirmation owe their careers to patriarchal forces and crass, relentless misogyny, to policy platforms guaranteeing the debasement of American women en masse. Misogyny and cruelty are not accidental facets of the Republican Party or the Trump presidency; they are the foundations.

In the targeted, sexist erasure of women protesters against Kavanaugh by Republican leaders, we see their degrading, patronizing characterizations of women writ large. We, women, are simultaneously inauthentic, incapable of real convictions and opinions, but also over-angry and “hysterical.”

Trump and Republican Party leadership do not adhere to a consistent story or portrayal of women, because they don’t have to; credibility is gendered, and it’s gendered male. They know that unlike us, they can say whatever they want and be believed.