Where Do Republican Women Fit in the Women's Movement? | The Mary Sue

Where Do Republican Women Fit in the Women’s Movement? 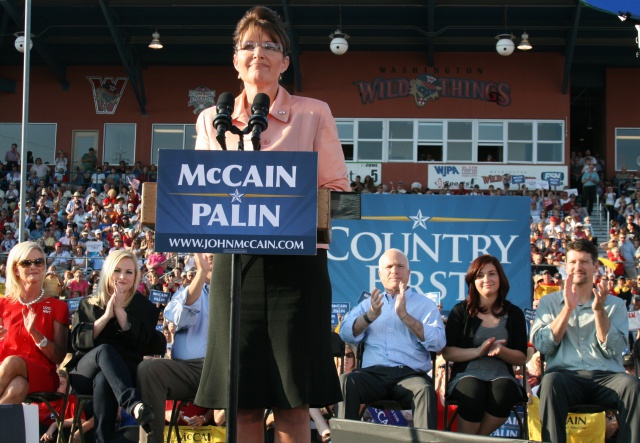 [Author’s Note: I’ve read some of the feedback on this article and I realize that a lot of what I was trying to say may have been missed or lost. I take responsibility for that, sometimes when you feel passionate about something it seems clear you and you forget to fill everything in. My point in this article was not that we should unilaterally support women in politics with our vote just because they are women. My point was that conservative women benefit from the work of progressive women. From the suffragettes who marched for the vote, to the second-wave feminists of the 60s and 70s, their accomplishments have meant amazing things for women. All women. Which means that even women who disagree with feminists are still getting access to opportunities…because of feminists.

So when I saw the article in Newsweek that’s what I was thinking about. We can not pretend that throughout history that the feminist movement has (a) always been intersectional, (b) not asked marginalized groups to be happy with the success of white straight women and to, therefore, “wait their turn,” (c) always called out its racist/homophobic/problematic members. Margaret Thatcher may be the antithesis of many progressive women today, but she is still included in books about “Bad Ass Women Throughout History” that are placed in the feminist section of bookshelves. Still, I heard your feedback and I hope that this can at least show you guys where I am coming from. Thank you.]

I went to the Women’s March on DC last year. It was an amazing experience to see so many women: girls, teenagers, and adults of every color, along with male allies, marching together declaring they would not be ignored or mistreated anymore. Yet in the back of my mind I had to remind myself of something, both then and now: not all women are being represented here. And I’m not talking about the multiple marginalized and intersectional social identities that the movement has been working to include. I’m talking about Republican and conservative women.

Movements like the Women’s March are progressive political movements. They are concerned about issues like abortion, women’s health, immigration, social justice issues, and climate control. For hard-core or even moderate conservative women, these are issues that create a sharp divide, especially in terms of abortion. This isn’t to say that Republican and conservative women don’t have a stake in the battle to increase women’s roles in government, or that issues like sexual harassment don’t go across political lines. But we also have to recognize that when we talk about women moving forward together, that there will come a point where politics will divide us.

Margaret Thatcher was able to become the first female Prime Minister of England, and Theresa May now occupies that seat, but both of them were/are leaders of the conservative party, with political beliefs and policies that are counter to most progressive feminist politics. Yet, we still look to them as examples of women being able to crack the glass ceiling and succeed in politics. But would we feel that way about a conservative first female president? Would it be a feminist success to have an anti-choice, anti-immigration, anti-civil rights female president?

Considering the attitudes surrounding Sarah Palin, who would have been our first female vice-president if John McCain had won, it seems like, despite the optics of it, liberal women would see it as a double-edged sword. Yes, a woman in the Oval Office as Commander-in-Chief. But do we want a female Trump? Or even a female Bush?

Newsweek published an article earlier last week about the high rates of women running for office in 2018, and how there is a difference between the attitudes of Democratic and Republican female candidates.

“Instead of ‘resist,’ the key defining word for me is ‘resilience,’” Jinyoung Englund told Newsweek. Englund ran for office for the first time in the Washington special election. “There are Republican women running for office for all different reasons and no one is telling their story,” she said. “And that’s doing a disservice to them.”

And it is also a disservice to the discourse around women’s issues if we forget to include white conservative women. They have proven to be a very powerful force; they were responsible for the election of Donald Trump, and they were also one of the biggest forces behind Roy Moore’s ultimately unsuccessful Senate run. We tend to place a lot of the “blame” or responsibility for Trump-ism on white men, but we have not paid attention to the fact that for as long as there has been a progressive female coalition, there has also been a conservative movement alongside them.

While most of the country was stunned when Trump clinched the presidency in a historic upset, conservative women weren’t—53 percent of white women voted for him. Now, many of them look up to women like Kellyanne Conway, the first woman to run a winning presidential campaign, and White House press secretary Sarah Huckabee Sanders as models for the kinds of leaders they hope to be in Trump’s America.

“Ignore women on the right at your own peril,” Shorey said. “Just because we don’t have pink hats and aren’t screaming in the streets doesn’t mean we don’t exist.”

We need women in both parties. Representation of only one type of American female identity is problematic. Plus, it is not as if we all automatically agree with each other just because we are from the same party. There are intelligent, political animals on the conservative side and even though I fundamentally disagree with them on a number of issues, they are part of a change that needs to happen in politics. Period.

Jenifer Sarver, who is aiming to become Texas’s first newly elected female Congresswoman in over twenty years spoke about how Republican women have been lost amongst conversation about the “Blue Wave”. “There is a feeling among conservative women that women on the left are getting a lot of attention, and we often feel left out. I think there’s something happening on the other side of the aisle as well that I think is exciting for different reasons.”

Sarver is motivated to run because she “disagrees with her party’s current direction and leadership, which she says has devolved into tribal politics and personal attacks. She wants to see the GOP return to “vintage Republican values,” like limited government and fiscal responsibility.

It is a different type of a resistance, but a resistance nonetheless. Republican women, like all female politicians, are already working in a system that does not encourage them to run or be successful.

Jennifer Pierotti Lim, the co-founder of Republican Women for Progress, said to Newsweek. “Democratic women were able to find well-established groups ready to help them run. There weren’t that many groups in place to support Republican women, and definitely, none that had already decided they were anti-Trump.”

As a result, Lim, along with fellow co-founder Meghan Milloy, launched Republican Women for Progress to fill in the gap and “provide[] political training and networking opportunities for conservative women skeptical of Trump and the GOP’s current agenda.” They also were the women behind Republican Women for Hillary.

No one knows who the first female president of the United States will be, but she could easily be a conservative woman. So the question remains: where do conservative women fit in with the Women’s March and modern Women’s Movement? Do they even want to be a part of it? The wave they will be riding, like it or not, is based on progressive women coming out and speaking loudly about their political values.

Let’s not forget that when suffragettes were fighting and being beaten for the vote, there were other women who said that women shouldn’t have the vote because, as this 1903 article from The Atlantic shows: “she has other, and in some sense, more important work to do. It is more important than the work of government because it is the work for the protection of which governments are organized among men. Woman does not wish to turn aside from this higher work, which is itself the end of life, to devote herself to government, which exists only that this higher work may be done. Nor does she wish to divide her energies between the two. This higher work, which is itself the end of life, is Direct Ministry to Life.”

I don’t have an answer to the question of where Republican women fit in this Women’s Movement, because it isn’t my question to answer. It is up to Republican and conservative women to decide if they want to be a part of it or not. I can only say that, even as a dirty liberal feminist, while I will disagree with and vote against conservative women for their politics, I fully support their equal ability to run and be a part of the governmental process. I hope this wave of women running for office affects women from all walks of life, because that is what feminism should promote. I just hope that conservative women feel the same.