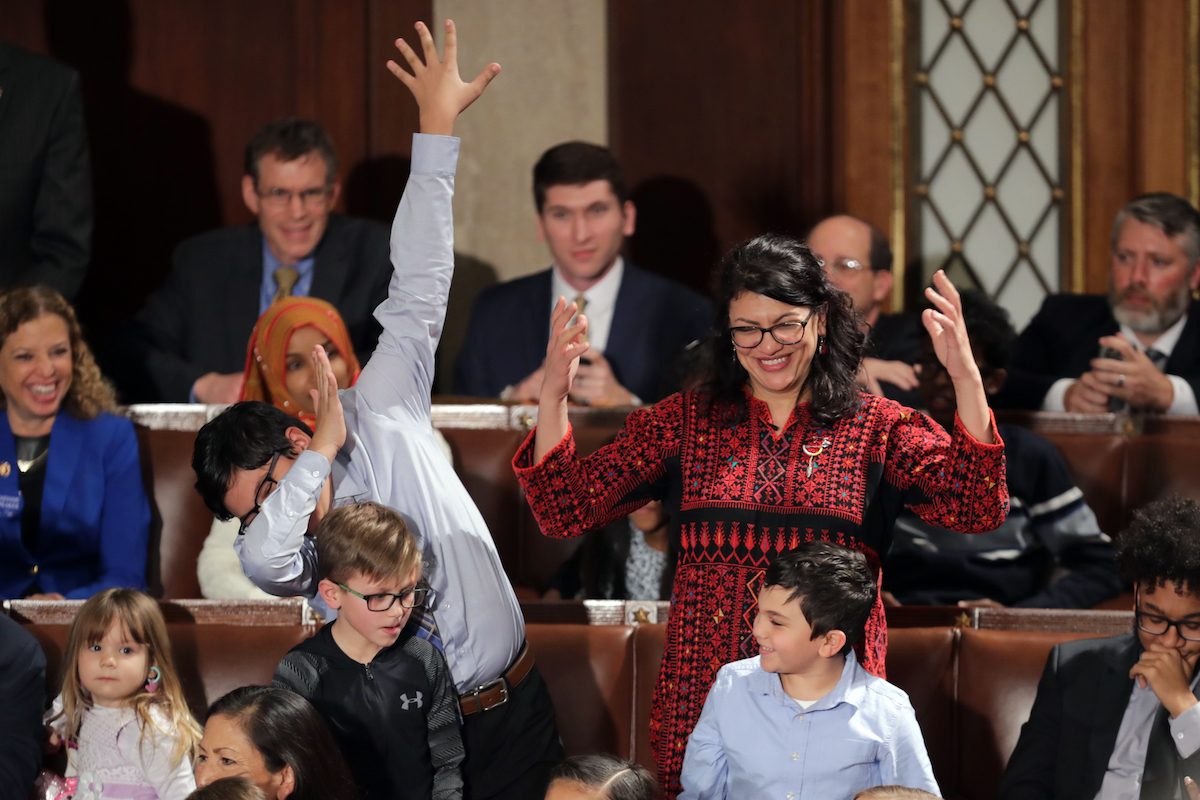 Congresswoman Rashida Tlaib of Michigan made history yesterday as one of the first two Muslim women sworn into Congress, as well as the becoming the first Palestinian-American representative. Hours after her swearing-in, Tlaib caught the attention of a lot of people in Washington, as well as the internet, when she said to a crowd of supporters, “Let’s impeach the motherfucker!”

She didn’t name the motherfucker in question, but, well, come on. We know.

“And when your son looks at you and says ‘Mama look you won. Bullies don’t win.’ And I said ‘Baby, they don’t. Because we’re gonna go in there, we’re gonna impeach the motherfucker.’” – Rep. Rashida Tlaib #WhyIsayFuck #116thCongress

Tlaib’s call to impeach Donald Trump isn’t a surprise. It was a big part of her election campaign. Before speaking to that crowd yesterday, she published an op-ed in the Detroit Free Press stating the case for impeachment.

But apparently, the use of an f-bomb is too much for a lot of people, even a lot of Democratic supporters. Comments on Twitter are full of replies about “going high” and how that language “isn’t helpful.” (There’s also a lot of racism in the mix, too, but sure, let’s focus on a naughty swear.)

Helpful for what, though, I’m not sure. Because that kind of language isn’t the status quo (in public) in Washington, and therefore using it signals that a person isn’t planning on maintaining that status quo. It’s a signal that she cares more about challenging Trump and his horrific policies than politeness or decorum, and that she’s not obeying the unspoken rules laid out for how a political fight is supposed to look–the kinds of rules that as of yet haven’t gotten Democrats very far.

If those are the messages that Tlaib is trying to send, then I think the language was quite helpful in conveying that.

I know there’ll be a lot of clucking today about Rep. Tlaib and “impeach the motherf**ker” but my supportive feeling is based on this. I’m student/fan of the ’60s because radical times call for saying radical things. We again are in such a moment. Let’s start treating it that way

Obviously, people are also bringing up Trump’s own notoriously disgusting language for comparison to call out the hypocrisy of his supporters who take issue with Tlaib while continuously finding new ways to excuse him.

This isn’t just about Trump’s language, but also his actions–the ones that inspired Tlaib to speak this way about him in the first place.

It’s peak Trumpster to get in a HIGH DUDGEON over a Rep. Tlaib saying “We’re gonna impeach the motherfucker” but not give a single drip of shit about any of the things Trump has done to warrant his impeachment.

I love Michelle Obama’s message of “When they go low, we go high.” I also love Eric Holder’s (obviously metaphoric) idea that “When they go low, we kick them.” He said, “That’s what this new Democratic Party is about.” And the two don’t have to be mutually exclusive. You can maintain the high moral ground while putting up a fight.

Besides, the Democratic Party isn’t a monolith. There are a lot of voices in the mix, especially since the last election, which injected a major shot of diversity into the party. Personally, I’m glad one of those voices is willing to publicly call Trump a motherfucker, decorum be damned.

I will always speak truth to power. #unapologeticallyMe