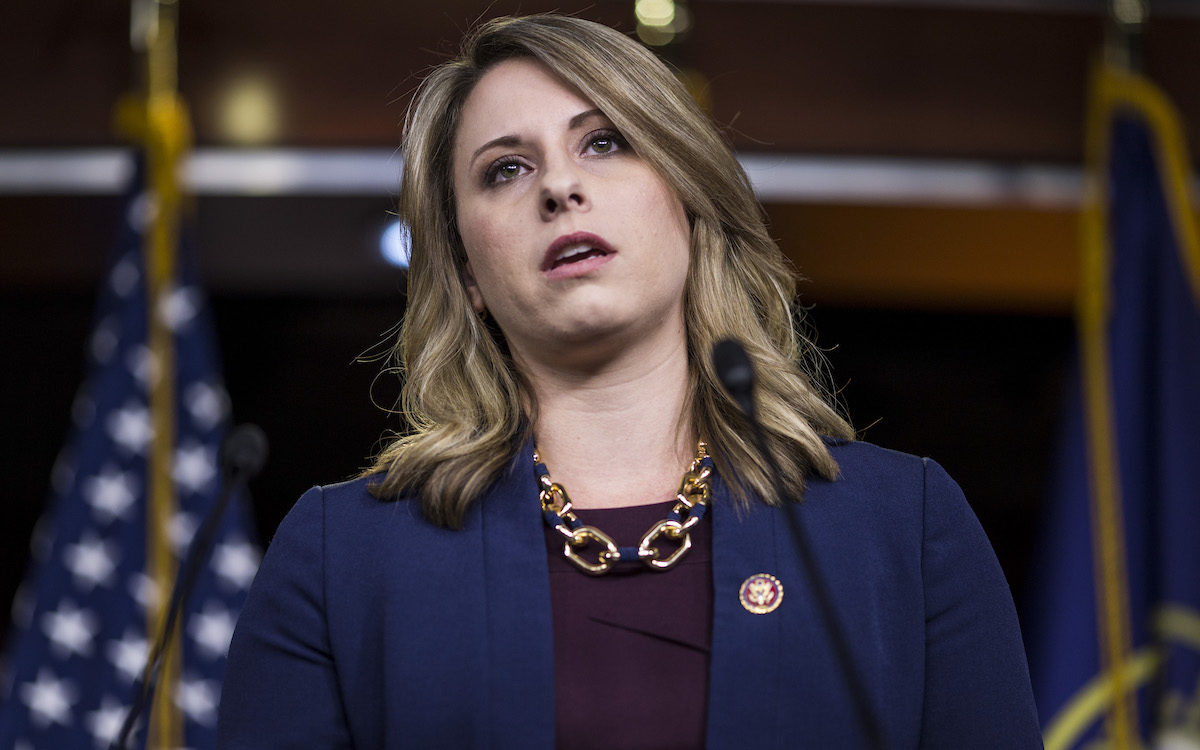 California Congresswoman Katie Hill announced earlier this week that she would be resigning after rightwing media outlets published nude photos. They were published as part of what Hill says is a smear campaign perpetrated, she says, by her ex-husband and Republican operatives, done to drive Hill from office amidst an ethics investigation into sexual relationships she is accused of having with congressional and campaign staff.

Today, Hill gave her final floor speech and she didn’t hold back.

“I am leaving now because of a double standard. I am leaving because I no longer want to be used as a bargaining chip.” pic.twitter.com/vYjJgVCPZP

After expressing her sorrow and her regret for feeling forced to resign and apologizing to everyone who helped her on her path to office and to all the little girls who may have looked up to her, Hill turned her attention to the horror show she’s been enduring since her pictures were first published by RedState, with help, she says, from her ex-husband, whom she has described as abusive.

“Ever since those images first came out, I’ve barely left bed,” she said. “I’ve ignored all the calls and the texts. I went to the darkest places that a mind can go. And I’ve shed more tears than I thought were possible.” But, she said, “I realize that hiding away and disappearing would be the one unforgivable sin.”

“I will never shirk my responsibility for this sudden ending to my time here,” she continued. “But I have to say more because this is bigger than me. I am leaving now because of a double standard.”

“I am leaving because I no longer want to be used as a bargaining chip. I’m leaving because I didn’t want to be peddled by papers and blogs and websites, used by shameless operatives for the dirtiest gutter politics that I’ve ever seen and the right-wing media to drive clicks and expand their audience by distributing intimate photos of me, taken without my knowledge, let alone my consent, for the sexual entertainment of millions.”

“I am leaving because of a misogynistic culture that gleefully consumed my naked pictures, capitalized on my sexual assault, and enabled my abusive ex to continue that abuse, this time with the entire country watching.”

After the first pictures were published, it was reported that the sources behind them had hundreds more that they were planning to release.

Imagine Republican men passing around these naked pictures and leering at them. This is sick.

No wonder she resigned. She must feel like her life is over.

This wasn’t just a media effort to shame Hill, it was a cooperative effort from media outlets and political operatives. Jennifer Van Laar, the reporter who first published the photos, worked for Republican candidates who had run for Hill’s seas and, as Mediaite has reported, even served as campaign manager for a candidate planning to run against Hill in 2020–something she didn’t mention in her article.

This is Jennifer Van Laar, she’s not just a reporter— she is a Republican operative.

Van Laar wrote the first story about Katie Hill’s affair, but what she didn’t tell you is that she used to work for Katie Hill’s opponent.

Hill gave her final speech shortly after the House voted to move forward with the impeachment inquiry against Donald Trump. “I’m leaving because there’s only one investigation that deserves the attention of this country and that’s the one we voted on today,” she said.

“We have an entire culture that has to change and we see it in stark clarity today,” she said, noting the countless men who have been credibly accused of sexual abuses and who remain in boardrooms, on the Supreme Court, or in the Oval Office.

[A] man who brags about his sexual predation, who has had dozens of women come forward to accuse him of sexual assault, who pushes policies that are uniquely harmful to women and who fills the courts with judges who proudly rule to deprive women of the most fundamental right to control of their own bodies, sits in the highest office of the land.

And so today, as my last vote, I voted on impeachment proceedings, not just because of corruption, obstruction of justice, or gross misconduct, but because of the deepest abuse of power, including the abuse of power over women.

Today, as my final act, I voted to move forward with the impeachment of Donald Trump on behalf of the women of the United States of America. We will not stand down. We will not be broken. We will not be silenced. We will rise and we will make tomorrow better than today.

“Thank you,” she concluded. “I yield back the balance of my time for now, but not forever.”