Redditors Team Up To Solve Cipher and Unravel a Mystery 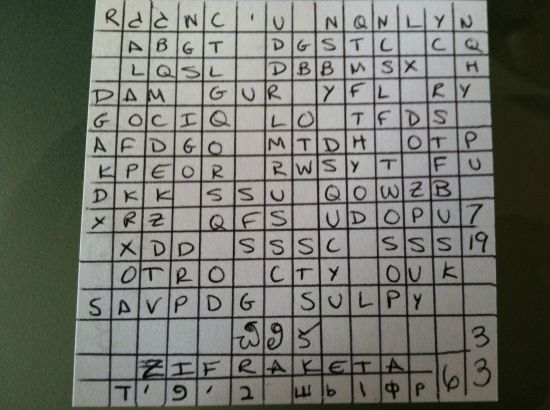 You think you’ve had weird interactions with strangers on the train? It’s probably nothing compared to what happened to Redditor delverofsecrets. While on the train in NYC, delverofsecrets bumped into a man wearing raggedy clothes who handed him the note shown above, along with a $50 dollar bill that had some seemingly random numbers written on it. After pondering the puzzle for a while, he did what any Redditor would: He harnessed the power of the hivemind.

Through a combined effort, Redditors were able to figure out that the message, encoded by bifid cipher, read:

But the rabbit hole goes even deeper. Shortly after the decoded message was made public on the Reddit thread, a person claiming to be the original “homeless-looking” man sent a private message to delverofsecrets, proving his identity by recalling personal details about the backpack delverofsecrets had been wearing at the time of the initial meeting. In this message, the man relayed yet another code, this one ultimately decoded to read:

YOU HAVE MANAGED TO FIND THE MESSAGE WITH THE HELP OF FRIENDS. YOU CHANGED THE RULES NOW SO WILL I. JULY TWELVE FOUR PM. FIND THE BLUE JAY AT SIX AND A HALF AND FIFTY SIXTH AND TELL HIM YOU ARE THE LAST.

And that’s where the story ends, for now. Delverofsecrets has stated in the post that he intends to attempt the rendezvous today, and will post about the results sometime later this evening. You can watch the hole thing unfold, or check out the wild backstory on Reddit.

The big question here is: What is all this about? There are a couple of possibilites. Some have theorized the code is some sort of job solicitation, either by the government or perhaps by Google. In this case, solving the code is part of some kind of entry test, and if this is the case, delverofsecrets probably ruined his chances by posting about it on the Internet. The other popular theory is that this is a viral marketing campaign, and will culminate with some sort of product-related reveal. Lastly, there are those who think it’s all just a hoax for karma.

Whatever the case, it’s an intriguing little mystery, and if it is viral advertising, I think it’s the kind of advertising most of us could get behind; this is way cooler than banner ads. Who knows how this will all turn out, but it seems it may reach its climax (or non-climax) tonight. Cross your fingers and hope it’s something cool.

Secrets, secrets are no fun…