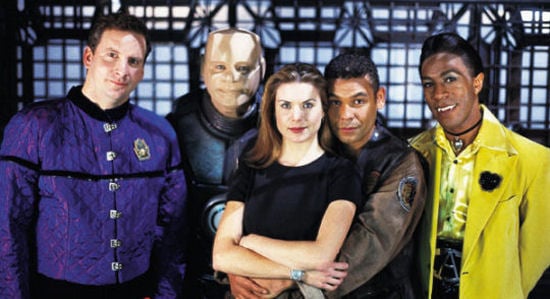 Red Dwarf, which ran on British television from 1988 to 1999, then aired some successful specials since then, is officially returning for a 10th series, according to the show’s co-creator Doug Naylor. The entire original cast of the science fiction sitcom is expected to return, and production begins in November. Back in January, the show’s star Craig Charles planted the rumor seed that the show might return. Charles plays Dave Lister, who, much like Mike Nelson and Joel Hodgson on Mystery Science Theater 3000 as well as Fry from Futurama, finds himself in space after being frozen in a cryogenic tank. When he wakes up, he is the last known human alive and is aboard the mining spaceship, Red Dwarf, along with his pregnant cat Frankenstein, Arnold Rimmer (a hologram of Lister’s dead bunkmate), Cat (who is descended from Frankenstein the cat), and Kryten, a “service mechanoid.” The entire cast — Charles, Chris Barrie, Danny John-Jules, and Robert Llewellyn — have signed on for the new series.

Also: Smegging — used kind of like “frakking,” but is now used to imply male ejaculation. According to my friend in England.