ReBoot Getting A Reboot: ALPHANUMERIC! 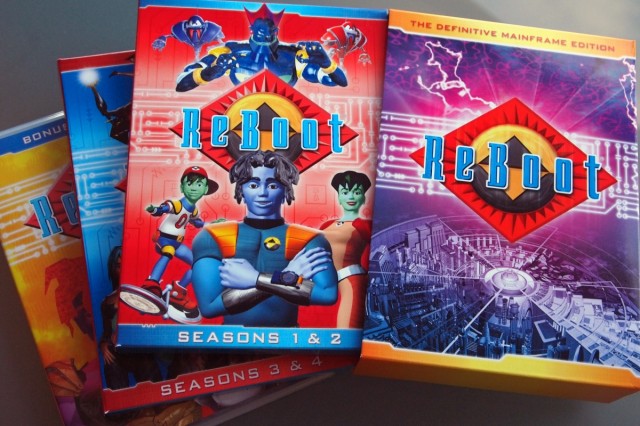 In “Best News Ever” News, Vancouver-based animation firm Rainmaker has announced they’re rebooting their Mainframe television devision – and their first order of business is an all-new version of the cult classic ReBoot. Get ready, binomes, because Bob is back to mend and defend – and it won’t even cost you $99.99 99!

The first two shows on Mainframe Entertainment’s production docket are an all-new ReBoot, and Tiger’s Apprentice, based on Laurence Yep’s YA novel series. This ReBoot reboot rolls around just in time for the revolutionary series’ 20th anniversary (quick, everyone, feel old!).

Though Rainmaker had released a webcomic continuation of the series in the years after the show’s untimely end, the ReBoot website has been largely dormant since 2009, making today’s announcement from Rainmaker a really huge deal. Here’s what Michael Hefferon, the President of Rainmaker, had to say about the re-launch:

“We are excited to focus our television production activities under the Mainframe brand with an all-new version of ReBoot as well as engage with celebrated children’s programming producer Jane Startz on Tiger’s Apprentice.  ReBoot is certain to be embraced by a new generation of fans while Tiger’s Apprentice will provide a bold and unique television experience for kids everywhere.”

Originally airing from 1994 to 2001, ReBoot was the world’s first-ever half-hour fully-CGI animated series. Given that basically every animated show you see on your television now is CGI, ReBoot was groundbreaking and incredibly important in the development of animated television. Oh, and let’s not forget – it was one of the best shows ever made.

Set inside a computer, ReBoot follows the adventures of Bob (a Guardian) and siblings Enzo and Dot Matrix, as they attempt to both defeat games uploaded by the mysterious User, and fight off evil in the form of twin viruses Megabyte and Hexadecimal. As time went on, the series got pretty intense, ultimately ending on a terrible cliffhanger where Megabyte had taken control of Mainframe – leaving fans everywhere to demand more ReBoot, in spite of Rainmaker closing Mainframe television. Thank the User, more is on the way!

Now if you’ll excuse me, I’m off to re-watch every single one of my ReBoot DVDs (starting with “Wizards, Warriors, and a Word from our Sponsor,” obviously) and re-learn all the words to this: