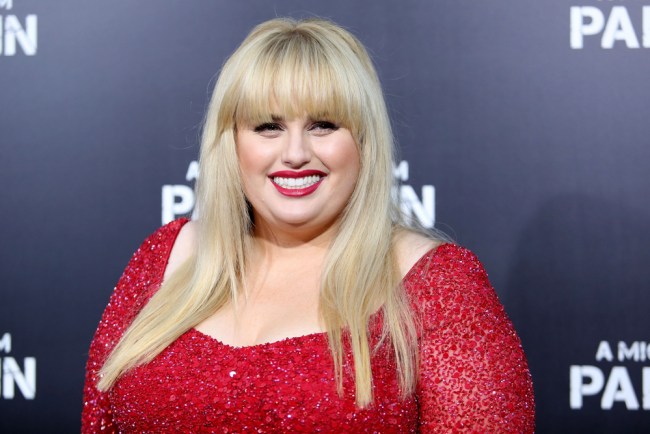 Rebel Wilson came onto most Americans’ radars as a bit of comedic relief in Bridesmaids, and quickly worked her way up to Funny Friend (How to Be Single) and Funny Scene-Stealing Secondary Character (Pitch Perfect). But because Hollywood has trouble breaking out of its own self-prescribed rules of “types,” we haven’t yet seen her move from Funny Friend of Romantic Lead to Romantic Lead herself. That’s about to change, though.

At a recent event for her new clothing line, she talked about a new project she’s working on.

“I start a new movie here next week, filming all around New York City… called ‘Isn’t It Romantic,’ and it’s a rom-com, and for once the plus-size girl plays the lead instead of the funny friend.”

“I get to play the lead role and kiss Liam Hemsworth — and kiss multiple other gorgeous men in the movie — which I think is a really, really nice message to put out there.”

According to Variety, “The film follows a cynical woman who doesn’t believe in love and then wakes up to discover that her life has become a romantic comedy.” And there’s absolutely no reason why that character can’t look like Rebel Wilson, except for the self-fulfilling standard that she so rarely does.

Wilson is working to crush these preconceived ideas of what lanes plus-size women are supposed to stay in in more than just her film roles. That clothing line she’s been working on is dedicated to providing women of all sizes with fun, youthful clothes they actually want to wear. Because women who want to wear those kinds of clothes don’t stop doing so over a size 6. Nor do they stop having romance in their lives. Why the fashion industry and Hollywood filmmakers seem to think otherwise is one of the great mysteries of the universe.