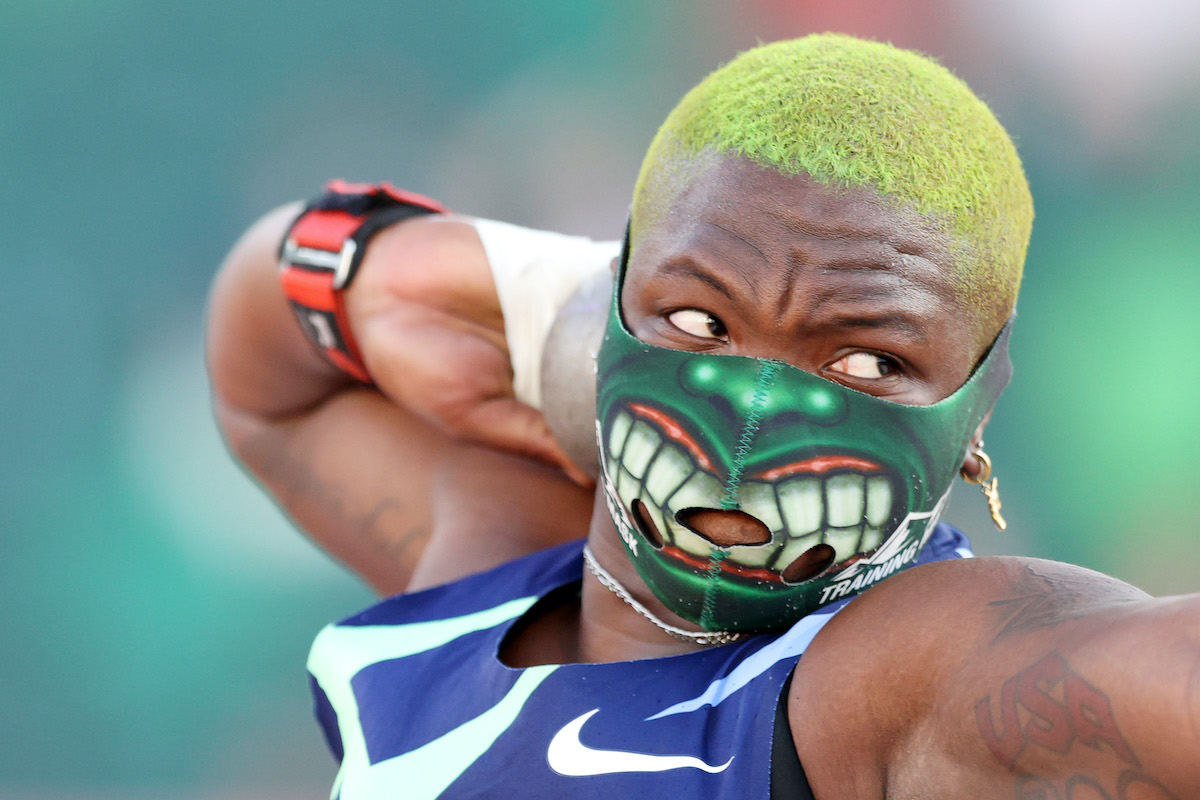 Raven Saunders just qualified for her second Olympics and she did so while wearing a Hulk mask.

Saunders will be headed to Tokyo after throwing her personal best and breaking trials records (though her teammate Jessica Ramsey did go on to beat Saunders’ throw during those trials). In addition to being amazing at her sport, Saunders got a lot of attention and a lot of love for her gorgeous green hair and the Hulk mask she wore during the trials.

In the women’s shot put final, @GiveMe1Shot throws a personal best, breaks the meet record and her reaction is EVERYTHING all while wearing a Hulk mask.@usatf | #TokyoOlympics x #TrackFieldTrials21

Saunders wore a Joker mask for the earlier qualifying round so clearly she has great taste in general. But the Hulk mask seems to have a special meaning.

Saunders has spoken in numerous interviews about how “The Hulk” was a nickname given to her in high school, and how she’s come to adopt it as a sort of alter-ego: an “intense, brooding game face that allowed her to tap the competitiveness burning inside,” as Charleston, South Carolina’s Post and Courier puts it. Saunders told the paper she “resonated with The Hulk, how he transformed into a hard-core animal to get the job done.”

But Saunders has also spoken about the flip side of The Hulk–the side that hurts others and himself.

According to Team USA, Saunders returned home proud of her performance in the 2016 Olympics, where she came in fifth. Her hometown of Charleston threw her a parade and even named August 17 “Raven Saunders Day.” But she says she soon began to sink into a depression spiral and because of her massive success, she felt unable to talk to anyone about it:

Before long, Saunders had lost her appetite to do anything other than train. And even that pleasure was sometimes taken away from her as she began to incur punishments for slacking off at school.

“I couldn’t go to practice and I was like, ‘Well, what’s the point’,” explained Saunders. “It didn’t feel like I had that many people to reach out to or that I wanted to burden.

“So I just decided I’d do what I’d been doing my whole life and internalise it all.”

Saunders says she was on the verge of ending her life when she made a “last-ditch effort” and texted an old therapist. “She soon received a response, providing her with the reassurance and courage to go home and get the help she needed,” CNN wrote in a profile last month.

Saunders has been incredibly open in interviews over the last few years, describing her mental health journey. After receiving the supportive response she needed from that therapist, Saunders checked herself into a mental health facility, where began to develop new tools for coping with stress and depression, as well as separating herself as a person from her achievements.

I’ll be competing in my first indoor meet since 2017. 2018 I didn’t compete indoors bc on 1/26/18 I was omw to carrying out an attempt to end my life. If not for sending a text to an old therapist I would not be here rn. Everyday I live is a gift bc that day could’ve been my last pic.twitter.com/N9SWlkVU6u

“They helped me to realize, you are not your sport. You’re Raven, that’s good at what you do. And being able to separate the two and being able to appreciate myself as a person and then myself as an athlete really opened myself up to being able to be truly happy,” she told Olympics.com. “Just focusing on myself for once, after having years and years of non-stop focusing on track, it was amazing, it was needed, it was a wonderful break. And it was a life saver.”

That’s where The Hulk has become a really essential tool.

“To me, separating Raven from the Hulk was really learning how I value myself as a person does not have to be valued by how well I do on a track,” she said to the Post and Courier. “I can use the Hulk as my outlet for things, and save that for the ring. So it’s been nice to kind of separate the two and have a clearer understanding of Raven the athlete and Raven the person.”

“Remember, The Hulk can be the good Hulk that’s saving everything or The Hulk can be the person that’s destroying everything,” Saunders told Team USA. “And for me, the depression side would be like the negative side of The Hulk. It was the side that was trying to drag me down, things that could destroy me, but also it could help me if I used it in the positive way of track and field.”

In the end, she says, “I’ve learned how to control him.”

Saunders also participated in a short documentary for the campaign Well Beings, which works to destigmatize mental health struggles and to “create awareness and resources for better health for all.” In it, she talks about her childhood, her path to the Olympics, and her Hulk persona:

We can’t wait to see what Saunders does in Tokyo this summer.