Rapunzel’s Tangled Adventure Is a Surprisingly Perfect Show for Millennials 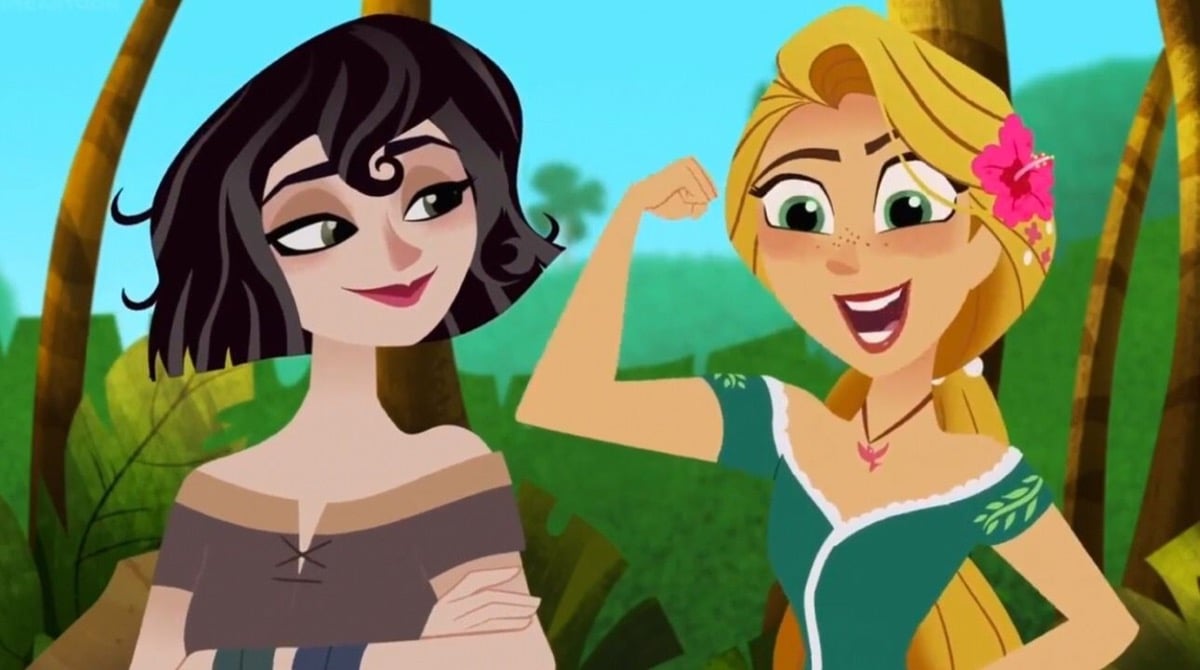 Did you know there’s a Tangled series on Disney Channel? Did you know it has all the original voice actors? Did you know Alan Menken has written a bunch of new songs for it? Did you know Jeremy Jordan plays a small villainous boy with an absolutely KILLER showstopper (that frankly, is even better than “Let it Go”) and it has an evil reprise (which I won’t link here, because of spoilers)? Did you know that Rapunzel gets an extremely gay-coded sword lesbian best friend and at one point they turn into birds and sing about how they’re finally free together?

Did you know it’s currently on season 2?

These are questions I often ask people when I get a little tipsy and start talking about TV, because, as I am here to proudly proclaim, my favorite show on TV right now is none other than the Tangled continuation/sequel series that everyone is sleeping on, Rapunzel’s Tangled Adventure. It really takes world-building and sequel stakes to the next level.

To be honest, I will be holding Frozen II to the same standard, because this show opened my eyes to what a sequel, or just a continuation series, in this case, could even do. Yes, I am 24 years old and love a kids’ show about a Disney Princess, but this show—created to give Rapunzel more outfits so they can sell a new line of Tangled dolls—has some surprisingly relatable themes for millennials (and even Gen Z).

I’ve found myself thinking I was watching a filler episode meant to teach a lesson to kids, and then by the end, marveling at how eerily close Rapunzel and her friends’ experiences mirror my generation. In Tangled: Before Ever After, the TV-movie pilot episode, Rapunzel gets her long hair back by triggering a natural disaster. At first, the mystery of the black rocks seems like it’s connected to her, but throughout the series, we see that it’s a previous generation’s missteps and secrets that caused it in the first place.

Meanwhile, the show’s character work focuses on Rapunzel defining her identity as a person outside her trauma, her boyfriend, and her new (royal) job. What is more Relatable Millennial Content™ than someone in their early adulthood struggling to define themselves despite cycles of abuse, in a world that’s falling apart because of a previous generation’s mistakes?

Unfortunately, despite its beautiful animation, interesting original characters, and expansion of the movie mythos, Disney hasn’t made it easy to be a Tangled series fan. From the huge gap from the original movie to the series, to the series changing names, the suspiciously long mid-season 2 hiatus and lack of information, and then the subsequent move to a deathly 7AM time slot, it really has felt like Disney just kind of threw this IP under the bus.

There have been a lot of fan conspiracy theories and videos on Disney YouTube, even tweets the animators themselves retweeted when the show disappeared for months. But RTA (Rapunzel’s Tangled Adventure) is finally back on the air, and still being overlooked.

The Tangled film took a classic fairytale and put it in the context of a woman freeing herself from from years of emotional abuse at the hands of a parent. This added complexity of “why doesn’t she just leave” is one of the reasons why it is one of my favorite modern Disney films, but it also poses a difficult problem for a Disney Channel sequel series for kids: How do you deal with the fallout of Rapunzel’s lifelong trauma and abrupt change in life circumstances in a show for kids, but stay true to the original film?

Some series would just ignore it and focus on tried and true fun adventures and happily ever afters, but what I truly admire about RTA is that it doesn’t shy away from these things. It gently teaches viewers about found family, creating strong platonic and romantic relationships, setting boundaries, and how to both support those with trauma, and unpack your own.

I won’t get into too many spoilers, but one of the biggest complaints about any princess story is that she doesn’t have any female friends. RTA immediately addresses this by creating Rapunzel’s lady-in-waiting, Cassandra, daughter of the captain of the guard and badass Sword Lesbian. She has her own stuff going on and is the polar opposite of Rapunzel in personality, so their friendship is a lesson for Rapunzel, who is so used to charming everyone she meets, about making friends as an adult.

While I could wax poetic about Cass’ sheer gay energy (and Cassunzel shipping), this is one of the most Millennial™ parts of the show. Outside of the easy proximity of friendships made in high school, or at work, or in college, making Adult Friends is hard. Rapunzel has to work at her relationship with Cassandra, and learn what having a close friend that didn’t rescue her from a tower or live with her as an animal sidekick means.

Their stories aren’t your usual kids show lessons about friendship, either—they fight onscreen, and talk about boundaries. The show even takes this emphasis on healthy adult friendships a step further when one of Eugene’s close friends from back in his thieving days, Lance, becomes a part of the gang. A Disney princess and her “prince” get to have friends that aren’t each other? As I said, this show has it all.

This isn’t to say that Eugene, Rapunzel’s boyfriend, isn’t also her best friend, and the show does some amazing things with their relationship. Eugene is a literal ex-con starting an entirely new life with no friends except his girlfriend, and big expectations to fill with her family.

Many times during the first season, he grapples with his place in her life and his career, another very uniquely millennial experience, that if they were going for the simple happily ever after for kids, they could have easily just glossed over. Instead, RTA flips deftly back and forth between Eugene struggling with his own new challenges, while wholeheartedly supporting Rapunzel through her own.

We’re often told that when a man and a woman exist in a film, they must fall in love, or the whole film shows us how they swept each other off their feet, but rarely in a fairytale do we see how they actually love and support each other each and every day. I’m always one to roll my eyes at excessive amounts of heterosexual romance onscreen, but Eugene and Rapunzel are like those friends that have been together forever and just click.

Eugene has a lot more life experience than Rapunzel and could easily scoff at her naiveté, but he finds joy in helping her discover even the smallest, most obvious thing, and continuously talks out her trauma and gives her the space she needs. In a show about a strong Disney Princess, Eugene’s healthy and supportive masculinity not only contributes to a refreshing (and adorable) couple dynamic, but he serves as a great role model for young boys. I would even argue that their relationship serves as a good model for kids (or really anyone) of what healthy and supportive romance, especially for those recovering from abuse, looks like, too.

RTA is, at its core, a show about adventure and Rapunzel struggling with the reality of being the lost princess, but having spent her entire life in a tower, wanting to take some time to see the world first. The whole show is literally Rapunzel’s gap year, and she pays the price by getting her big long hair back (no spoilers, it’s complicated).

One of the show’s strengths is that, through her newly opened eyes, we discover all is not as it seems in the kingdom of Corona. She just regained her real parents, but there are some surprisingly sinister secrets and choices by her father, the king, that she must reckon with—and her foil character, Varian, must do the same with his father

While RTA has fun songs and relationships, it also has an incredible amount of mystical world-building (which has spurred some truly interesting fan theories in the Discord, let me tell you). The more of the show you watch, the more you wonder how you can go back to the simplicity of the original film, knowing things like that there’s a dark, reverse version of the film’s healing incantation (“flower, gleam, and glow” etc. etc.).

Sometimes, watching the Tangled series, you wonder how it isn’t more of a millennial sitcom about being in your 20-30s in this day and age, rather than a princess fantasy. Rapunzel has to meet and deal with her boyfriend’s possessive ex, juggle her protective best friend and boyfriend fighting, develop whole new relationships with her parents as an adult, and balance hobbies with work.

Rapunzel’s Tangled Adventure chooses to parse out these uniquely adult issues for kids in a gentle, yet sometimes humorously self-aware manner, which is what makes it so comforting and relatable for millennials to watch. It doesn’t hurt that this important, interesting story goes down even smoother with some great songs, too.

Klaudia Amenábar is a social media editor by day and many other things by night. You may know her from her embarrassingly unchanged Tumblr URL from high school, elphabaforpresidentofgallifrey, but she spends most of her time as a pop culture blogger and podcaster. She can sometimes be found voice acting in audio fiction podcasts and doing improv as well. You can follow her on Twitter and Instagram @kaludiasays.