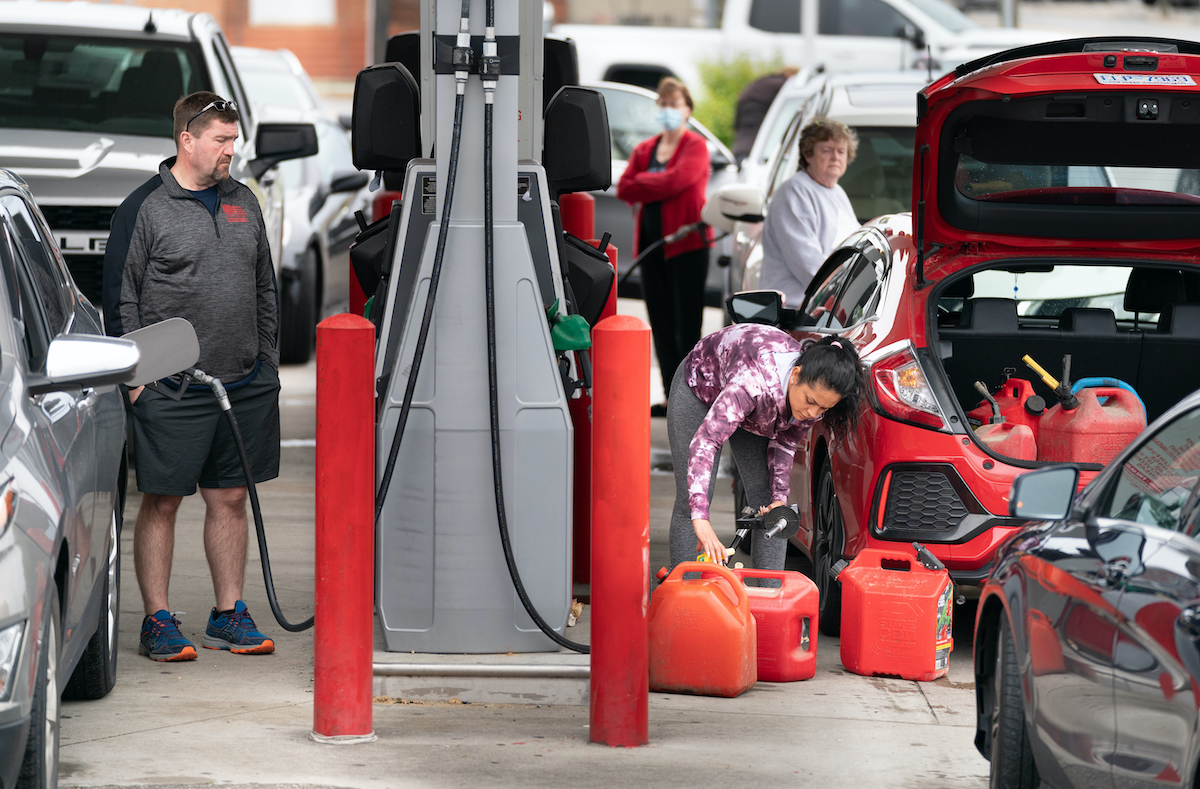 Late last week, an attack by ransomware hackers shut down Colonial Pipeline, a 5,500 mile pipeline system that carries about 3 million barrels of fuel from Texas to New York every day and accounts for about half of the East Coast’s fuel supply.

Some states have already been affected by minor gas shortages but even more are being hit by the perception of gas shortages. Which had led to some truly ill-advised reactions.

I’m crying at how every time something happens, Americans turn into the cast of the office pic.twitter.com/P0coDp6JfX

Yes, in a move that is reminiscent of the Great Toilet Paper Panic of 2020 but so much more dangerous, people have begun hoarding gasoline. And some of them are just using any old containers they have lying around.

Like this person who just used grocery bags (!) without any apparent forethought as to how they would seal the bags once they were filled with gas:

Or this person who presumably swung by the Container Store on their way to the gas station:

Or this nightmare on wheels:

The U.S. Consumer Product Safety Commission should not have to be out here telling people not to put gasoline into plastic bags and yet here we are.

Do not fill plastic bags with gasoline.

(Update: 5/14: The images of people filling plastic bags with gasoline have been revealed to be unrelated to the Colonial Pipeline shutdown. They were both taken in 2019–one in Mexico and one in Houston, Texas, because bad ideas are nothing new. We’ve always been like this!)

Several governors have declared states of emergency, although that has more to do with preventing price gouging than the threat of an actual shortage. Historically, most East Coast states have been able to find alternative fuel supplies in times of emergency (like during hurricanes or one of the pipeline’s many leakages.) That’s not to say the shutdown is having no effect on gas availability but again, just as with last year’s toilet paper shortage, the long lines and limited supplies at gas stations in some states would seem to be due to fear and hoarding more than anything else.

[hoarding way more gas than i need because of scary headlines] damn you, joe biden, for this gas shortage pic.twitter.com/gEiU0hUJhc

Filling garbage bags full of unleaded gasoline, burying the gasoline in my backyard, then screaming at Mr. Biden on my tv for not giving me enough gas for the 11th bag

In a strange twist, DarkSide, the Russian hacking group responsible for the attack, released a statement Monday saying they are “apolitical” and that this wasn’t about targeting a specific government or “geopolitics,” but just about getting money. They also said they’d be more careful in choosing their targets in the future so as to avoid “social consequences.”

Which is a strange thing to say given that two of the most frequent targets of ransomware—when hackers threaten to release a company or organization’s users’ private data unless a ransom is paid–happen to be hospitals and schools. I don’t know DarkSide’s policy on targeting those sorts of vulnerable organizations specifically but if they’re going to go out of their way to apologize for “social consequences,” it seems like that’s a more important place to start.