The Radical Monarchs Want to Change the World, One Young Girl at a Time 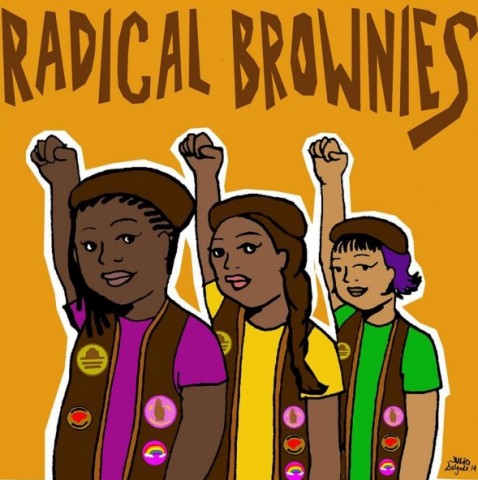 While the Radical Monarchs of Oakland, California, are not officially affiliated with the Girl Scouts, they are the only group of this kind in the United States—­a pro­-girl organization entirely composed of young girls of color, in which girls can freely express themselves, learn more about their history, and empower themselves in a group of their peers.

They wear berets in honor of the Black Panther and Brown Berets movements, pro-­civil rights organizations for people of color and Chicanos, respectively.

Like the Girl Scouts, they have badges, but the badges are for completing units such as Black Lives Matter, Radical Beauty, Pachamama Justice, Radical Pride, and Radical Roots, to name a few. They also have a Self­Love badge, given out around Valentine’s Day, following a unit wherein the girls read bell hooks essays. You can find out more information about the badge system by clicking h​ere.​

The idea of a group of this nature came to co-­founder Anayvette Martinez through watching her own daughter explore her identity as a young woman of color. In a statement on the group’s official Facebook page, she writes, “I saw the need for a group that would empower and encourage her to form bonds of sisterhood with other girls in her community. I began to imagine what a radical young girl’s social justice troop looked like; a group that centered and affirmed her experiences as a beautiful and brilliant brown girl against so many societal pressures to conform to mainstream ideals of girlhood.”

Martinez called upon friend and eventual co-­founder Marilyn Hollinquest, and together (along with Martinez’s daughter) they formed what was originally known as the Radical Brownies. Due to copyright issues, they are now the Monarchs.

The group says it’s inspired by social justice movements of the past and strives to create a space where young girls of color can “step into their collective power, brilliance, and leadership.”

The focus on black girlhood is partly a response to the history of the Girl Scouts. For the first five years of its life, the Girl Scouts e​xclusively accepted white girls. Although the Girl Scouts are now increasingly seen as what Martin Luther King Jr. referred to as a “force for desegregation,” the importance of a group such as the Radical Monarchs, which specifically focuses on the lives of black girls, cannot be overstated.

“Oakland’s Radical Monarchs organization offers young people a space where they can develop commitments to social justice and to gender equality,” says Katharine Capshaw, a professor of children’s literature at the University of Connecticut, whose recent book, C​ivil Rights Childhood,​ discusses how the black child has been an image of social change. She continues,

Too often, adults underestimate children’s awareness of the world around them and their desire to contribute to society. Young people are passionate about social change—this has been the case since the civil rights movement of the 1950s and 1960s, which in large part was propelled by college students and teenagers. The Radical Monarchs are walking in that tradition, connecting young girls to causes that are important within the community and offering them pathways to social activism.

The Monarchs also promote LGBTQ inclusion within their ranks, welcoming black girls of all sexual and gender orientations and identities. This is a spirit that stems from their founders, themselves queer women of color and trans allies. “We believe in creating trans and gender non­-conforming inclusive spaces,” Martinez said in a Facebook post on the group’s page. This year, in order to show their support for the LGBTQ community, the Monarchs solicited donations for and subsequently participated in the 12th Annual Trans Rights March in Dolores Park, an event geared towards increasing visibility for the rights of trans people in Oakland’s suburbs.

Eventually, Martinez wants to launch the Radical Monarchs network in other cities. She says there has also been interest in expanding the Monarchs to other countries; the Monarchs’ Facebook page is filled with requests from countries as close as Canada, as far as France, and beyond. For now, however, the primary goal is to grow and preserve the original group in Oakland before making that leap.

The Monarchs are currently holding a fundraising campaign. If you would like to donate, please click here!