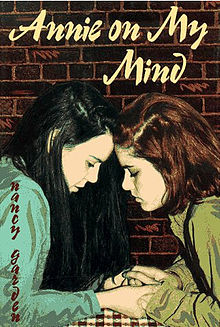 [Editor’s Note: This is an exclusive sneak peek at a post written for Queer Romance Month 2015, in response to the theme: We All Need Stories.]

Dear Annie On My Mind,

I clearly remember the first time I read you. I’d ordered my copy online after hearing about you through the grapevine and as soon as it arrived, I curled up on my couch and started reading.

I didn’t pause. I didn’t look up. I forgot to eat.

You showed me that.

As a baby queer and a bibliophile, that knowledge gave me life. Sometimes quite literally. And it definitely gave me hope. Because even though your characters, Annie and Liza, weren’t quite like me (I wasn’t aware of the concept of asexuality yet, and it wouldn’t be until later that I discovered that word and how well it fit my experiences) I knew I was at least queer romantic and growing up with a disability, books were my gateway to the world. Up until that point, I felt invisible.

You opened up another world for me. Reading you became the first step toward many more queer stories. Most of them YA, like GOOD MOON RISING and Julie Anne Peters’ KEEPING YOU A SECRET and Sara Ryan’s EMPRESS OF THE WORLD. Some of them not, like all of Sarah Waters’ books. Over the years, more and more followed.

You also opened up the world for me. I read you at a time when I’d only just started to explore my own sexuality, my experiences, my attractions, and the many, many, many questions I had. It wasn’t the first step, but it was an important one, the realization that if queer girls like me could be heroes, then maybe our voices mattered enough, our stories mattered enough, we mattered enough.

“The thing about mountains is that you have to keep on climbing them, and that it’s always hard, but there’s a view from top every time when you finally get there.”

Almost a decade later, that search for visibility and identity are still intrinsically linked. There are days that it seems impossibly hard. But there are also days that hint at more understanding. Not always of the world but at least of myself. And that, too, started with a book.

Almost a decade after discovering queer girls like me could exist on the page, I put my pen to paper and started on a story that was different from everything I’d written before. A story about a girl who loved another girl, fiercely if not fearlessly. A story about heroes. A story about hope.

Because queer girls like us, we don’t just matter enough. We matter completely. We are not invisible. We deserve to be seen.

And one day, the world will be at our feet.

Queer Romance Month runs throughout October, celebrating love stories in all shades of the rainbow in all shades of romance. Join us, and over a hundred LGBTQ+ authors and allies, for essays, flash-fiction and much, much from.

About the author: Marieke Nijkamp is a storyteller, dreamer, globe-trotter, geek. She holds degrees in philosophy, history, and medieval studies, and wants to grow up to be a time traveler. Her debut young adult novel This Is Where It Ends will be published by Sourcebooks Fire on January 5, 2016.