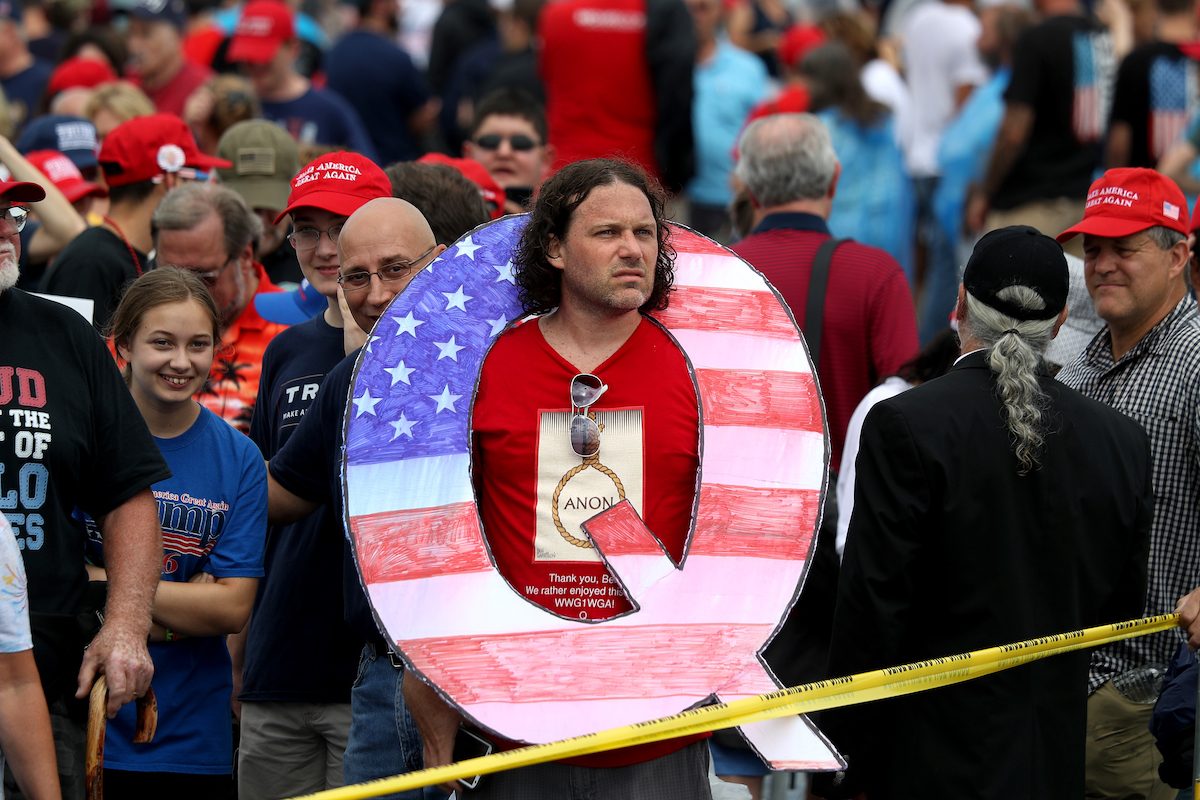 A fun casualty of the end of the last administration is that all the conspiracy theories that centered Donald Trump and his presidency in their beliefs are now scrambling to justify their ideologies or just shutting down entirely. Meaning it looks like QAnon might actually be dead and gone. (Or at least going into hibernation.)

If you’ve somehow made it four years without becoming familiar with QAnon (first of all, I am jealous), this shared collection of brainworms states that Trump has been at the center of a plot to bring down a bunch of “deep state” operatives, including the Clintons, the Obamas, George Soros, and more. They believed Trump was secretly working to arrest all of them and bring down their whole Satanic, cannibalistic pedophile ring—or that they had already been arrested and Trump was going to reveal that fact in some spectacular fashion.

What started as a mysterious 4chan message post has gained disturbing mainstream traction in recent years, even though every passing day was a day that their designated savior failed to make good on the promises they’d convinced themselves he’d made.

If Trump was supposed to take down the deep state before leaving office (and with Joe Biden being a key figure in this fictional cabal, he certainly had to, right?), they were running out of time going into this week.

The new deadline for QAnon followers is when Biden steps up to take the presidential oath.

He – alongside Hillary, Obama, Pelosi and Schumer – will be arrested by the military and taken to an underground base to face a military tribunal which will be live on all TV networks. pic.twitter.com/XoxpLUN7C5

Now that the inauguration has come and gone and Trump has left D.C. for good—and Joe Biden is somehow in the White House rather than that secret underground military prison that definitely exists!—these Q devotees are scrambling to find meaning in their now-empty lives.

The message boards have been aflutter.

Moderators on the biggest QAnon forum now banning people who don’t keep the faith after Inauguration. They’re having a hard time enforcing it.

“Can someone explain how this is not over?” reads the top response. pic.twitter.com/8xy2QWrUB2

“Can someone explain how this is not over?” YES, PLEASE DO.

There’s a legit crisis of faith happening for a lot of Qanon followers right now. Someone commented on this video “I’m truly questioning if God exists at this point. How many millions and millions of us prayed and prayed..with nothing answered.” and this woman responded “me too.” pic.twitter.com/DSSkWaGkTW

Even Ron Watkins, a prominent figure who many believed to be “Q” himself, posted a message calling it quits and telling followers to “keep our chins up and go back to our lives as best we are able.”

Ron Watkins pulls the plug. This will be absolutely crushing to QAnon believers: pic.twitter.com/SfxJwCLCoU

A moderator on the 8kun “Q Research” message board—a central hub of Q information—wiped the forum clean and put up a lengthy screed comparing the Q community to GamerGate, saying they were “performing euthanasia to something I once loved very very much.” (That post has reportedly been removed and site restored. According to the Washington Post, the site’s leaders have demanded that moderator’s death.)

The true believers in QAnon largely won’t go away in all likelihood. But if /qresearch/ dies, then one of the main drivers of QAnon conspiracy theories for years will be gone.

Still, other Q believers are refusing to believe that they’d been duped, even going so far as to create new fantastical conspiracy theories to fill in the gaps that would otherwise leave them stranded in reality.

Trump has speculated about the possibility of starting a new political party, called the “Patriot Party.”

“It’s unclear how serious Mr. Trump is about starting a new party, which would require a significant investment of time and resources,” writes the WSJ, although the unlikelihood of this actually happening isn’t enough to sway his most diehard supporters. They’ve already proven that results aren’t nearly as important to them as the idea that they are part of an enlightened, persecuted club. (Funny how that sounds just like a description of a cult, huh?)

Some on these forums have pointed to Trump’s last words before boarding his plane to Florida (“We will be back in some form. Have a good life. We will see you soon.”) or Eric Trump’s tweet of the basic cliché, “the best is yet to come,” as proof that they weren’t wrong in putting their faith in this conspiracy, that something—anything—big is definitely coming.

Anything to keep feeling justified in their bizarre, racist, fascist, self-indulgent beliefs.

When I think about what qanon believers are currently going through, I recall one of my earliest memories: me, three years old, inconsolably sobbing because I had become somehow convinced that the cast of Peanuts was coming to Thanksgiving and nobody could convince me otherwise